2015 is behind us, but the year left us some great movies to enjoy. Everyone has their favorites, but these are mine. There are a few films that will not make this list, simply due to the fact that I haven’t seen them. I expect, had I watched them, they would have made the cut, but I didn’t so they don’t. That means movies like Mad Max:Fury Road, Creed, Mission:Impossible-Rogue Nation and The Revenant are nowhere to be found. So if you’re fans of those movies and feel like they deserve a place on the top ten list, I might agree with you…after I get around to watching them.

Until then, these are my ten favorite movies of 2015… 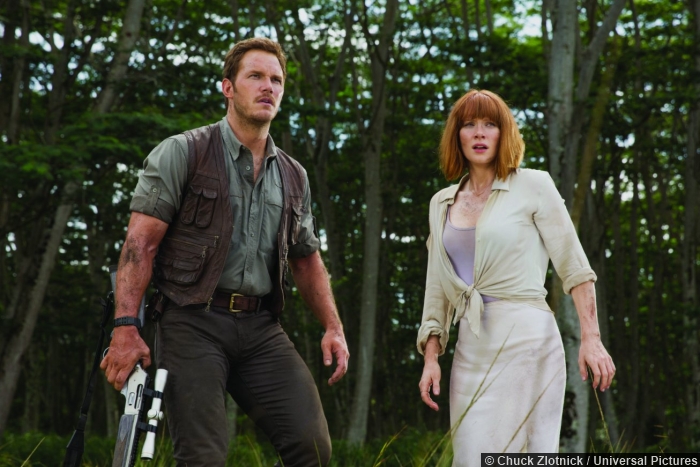 Before Star Wars shattered Box Office records, this movie was the top of the heap in 2015. Colin Trevorrow was at the helm, making his debut as a “big picture” director (though he did a great job with a little film called Safety Not Guaranteed) and though the screenplay was the movie’s biggest sin, the spectacle was on point. Even though it was the fourth movie in the franchise, the film almost entirely ignored the previous three and made it a spiritual successor to the original. That’s perhaps the biggest reason why it broke so many expectations (it made about double what it was estimated to bring in). Jurassic World made a killing last year playing off of the nostalgia and love fans have for the original, now over twenty year old (!) movie. It wasn’t a perfect movie by any means (again, that screenplay…woof), but it brought the feeling of Jurassic Park back to cinemas.

It’s a movie directed by Spielberg, starring Hanks, written by the Coens. It’s almost unfair how good this movie was destined to be. It’s a film that is beautiful to look at, whose score (featuring Thomas Newton Howard filling in for–and mimicking–the then-ill John Williams) is superb, and with great tension and drama for all two hours of its running time. As I wrote in my review, this is a classic sort of movie that could have easily been made a generation prior, with Grant directed by Hitchcock from a screenplay by Capote. That would have been something to see…Just like this was.

I had zero desire to see this movie, but I did because I’m a dad and taking your kids to see what you think will be “stupid kids movies” is part of the job. And yet, by the time it was over, I was the one who enjoyed it the most. As I said in my review of the film, I sat down in the theater with my pen and pad, ready to write pros and cons, and halfway through I gave up because the the pros were outweighing the cons twelve-to-zero. I went into the movie thinking it would be a poor man’s Jumanji. It ended up being the next generation of that great children’s movie. Bravo to all involved.

The only movie on this list that I didn’t review (because I couldn’t find it in theaters and only recently watched it) is easily one of the best hard science fictions movies of the past decade. The plot revolves around an eccentric inventor who is developing an android that is 100% believably human. He enlists the help of an ordinary tech worker at his company to be his guinea pig to test whether the robot can mimic human consciousness. There are plot twists and big revelations as the movie goes on that I’ll not spoil here. If you haven’t seen it, it’s a 10/10 movie as far as I’m concerned, with a final act that kept me on the edge of my seat even after the credits started rolling. 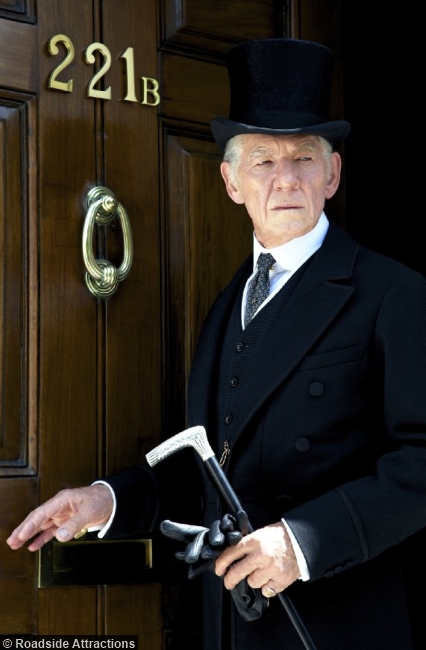 Mr. Holmes did not get a wide release. It did not get a lot of commercial buzz. It certainly wasn’t linked with any big advertising campaigns or merchandise deals. It was a simple, quiet film. The movie offers us insight into the mind of Sherlock Holmes, while treating us to a multi-layered plot with a great mystery at its core (two mysteries in fact). It’s the kind of movie that could have been made in any year, but it happened to be one of the best films of last year. It offers a very different take on the titular character than you’ll find on BBC or CBS, but despite that it managed to perfectly capture the essence of Sherlock Holmes, played brilliantly by Sir Ian McKellen.

In the several months since its release it has become commonplace to criticize this movie. Some say it is too stuffed. Others argue the tone is off. While I understand where the complaints are coming from, I still see this movie as one of the best of the year. It could have used another thirty minutes to breathe, but instead it is a tightly packed movie that is more than a mindless romp. There are great philosophical questions considered here, regarding both Ultron and Vision. There’s wonderful humor, as only Joss Whedon can do it, and there’s a great human component to the movie, as Hawkeye is offered as the anchor of the picture. But like I said in my review, your take on this movie will be dependent on how you receive James Spader’s Ultron character and the way he was brought to life by Joss Whedon’s screenplay. If you can accept that he’s an 8 foot tall robot with the personality of…well, James Spader, then you’ll be fine. If you think he’s too “casual friday” to carry out a world-destroying plot, you might not like it. I was okay with Spader’s Ultron (once I got used to him), so I loved the movie. 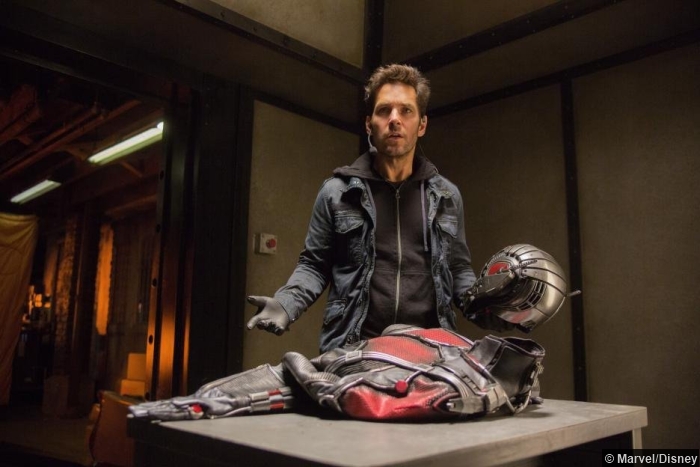 As much as I loved Age of Ultron, it wasn’t the best comic book movie of the year. That honor goes to Ant-Man. The movie worked because everything about it was unconventional. The director was previously known for romcoms. The star was best known for either comedy movies or a recurring role on Friends. The plot was an origin story about 5 years after Marvel gave up on solo-hero origin stories. There were so many things that should have gone wrong with it, but instead, the movie hit every curveball out of the park. This film still would have been much better-received if it had been released in place of Iron Man 2 back during Phase One. It’s a great film though, and brings some good characters into the wider cinematic universe. I’m excited to see Ant-Man and company again soon.

Matt Damon carries this movie in a way not seen since Tom Hanks did with Cast Away. Indeed this movie (and the book before it) has been dubbed “Apollo 13 meets Castaway,” using the latter movie’s main character isolation, and the former movie’s “scientists scramble to problem-solve and improvise before it’s too late” earth-bound drama. Both plots converge here and the result is one of the best films of the year. Other than a few words at the end, Matt Damon’s character does not speak to another human being once he is stranded early in the film. Instead he fills the silence with a combination of log entries and general monologuing. It works perfectly, and it works entirely because Matt Damon, and director Ridley Scott, make it work.

Inside Out is a movie that is simple enough to pitch, but a bit of a struggle to breakdown. When someone asks you what it’s about it’s easy enough to summarize: “It’s the story about the anthropomorphized feelings of a preteen girl in the midst of a turbulent year.” Say that to someone and likely the next question will be: “How does that work?” In lesser hands, it might be hard to explain, but with Pixar, the result is a movie that makes perfect sense despite how crazy the premise is. And not only does it make sense, it manages to be the most moving film of 2015. With Inside Out, Pixar has once again shown the world that they are still the studio that best honors Walt Disney’s legacy. Not only is the film a great “Disney movie,” it’s a great movie, period. It’s not a movie for kids, though, despite the fact that kids will love it. This is a movie for parents, and as a parent I wept harder in this movie than I have over any movie not named It’s a Wonderful Life. This movie made me want to better myself as a dad. As I said in my review, Inside Out is more than a movie: It’s a treatise on emotional catharsis. It’s not just one of the best films of 2015, it’s one of the most moving films I’ve ever seen.

My favorite movie of the year is 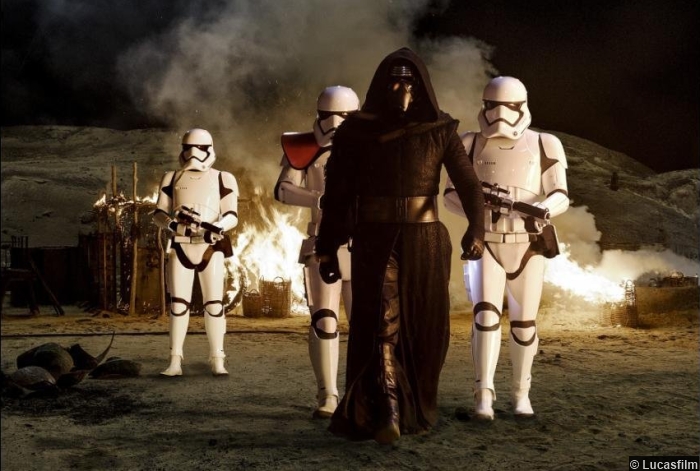 The Force Awakens is the most emotionally charged Star Wars movie ever made. It has pitch-perfect humor, thrilling chases, moments of terror, heartbreak, exhilaration and unbridled joy. It feels. And because it feels it will make you feel. JJ Abrams has crafted a movie that toys with every emotion you have and by the time the final five minutes are finished you very well may—like me—be so overcome with emotion that you will have to sit dumbfounded, trying desperately to process the wave of nostalgia. Nostalgia was a big theme this year with my favorite movies. Jurassic World, Goosebumps and Star Wars all hearkened back to movies I grew up enjoying (Jurassic Park, the Original Star Wars trilogy, Jumanji), but the one that takes the cake is Star Wars. It’s the one that is closest to my heart; it’s the one that speaks the loudest to my inner child. I didn’t just want this movie to be good, I needed it be good. And it was great. Was it perfect? No. But it didn’t have to be. It just needed to feel like Star Wars again. I spent all of 2015 worried the new movie(s) would fail to feel like they should but when the moment came and the movie began, from beginning to end it felt like the Star Wars I remembered as a child. For recapturing my youth and giving me the chance to be a kid again (not to mention being a great and fun movie), Star Wars: The Force Awakens is my favorite movie of 2015.

Those are a few of my favorite films of the year. What about yours?