GONG! The sound startled Vince and rocketed him out of bed. He looked around, but only a single bright light illuminated the corner of the hotel room. Vince hurried over to the source of the light. It was his cell phone, whose alarm had been set to play Undertaker’s theme song.

“Argh…I didn’t set my alarm for…1 am?! Ugh…back to—” Vince never finished his sentence, as suddenly the whole hotel seemed to shake. Spinning in place, looking for something to hold on to, he suddenly saw a light flicker under his door. The colors changed…from red…to yellow…red…to yellow… “Oh no…” he mumbled to himself. He took a step back toward the window when…he…appeared.

He was dressed head to toe in white sheets. He had never worn such an outfit before…at least as far as Vince could recall…but there was no mistaking that voice.

“WELL YA KNOW SOMETHIN’ VINNY MAC!” The muffled shouting of Hulk Hogan boomed from behind the white sheet. “I’VE BEEN WAITING A LONG TIME TO TAKE YOU ON THIS TRIP!” 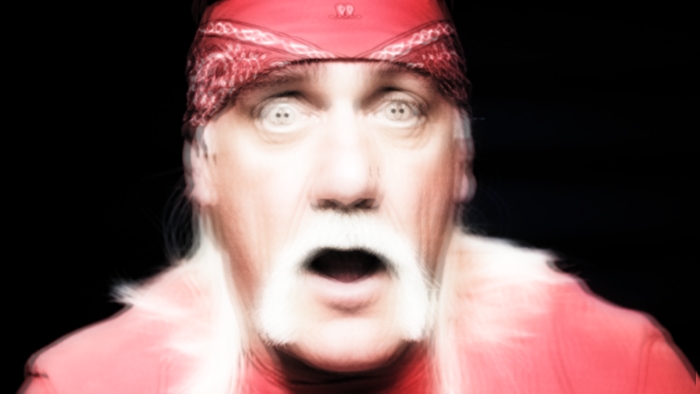 “No. Nevermind.” Vince said, waving his hands frantically. I don’t want to know. I just want you to leave. This isn’t happening. You don’t exist.”

“I said you don’t exist! You’ve been erased from history! This is all a bad dream, just like Russo.”

“He was but he left…out the window! Why don’t you go look for him!” Vince shuffled away from the window and onto his bed.

“I hate that slimy, New York, no good—RAWR!” Hogan ripped his white sheets off, revealing his classic red and yellow attire. He kept the white sheet over his face though. “Forget him. He’s history…actually that’s what I am: History.” Hogan pushed the hotel window open and a gust of cool air filled the room. “Well past to be precise.”

“What are you doing? Shut that window!”

“No way brother, you and me are going on a trip.” The oaf lumbered over to Vince and scooped him up in a fireman’s carry.

“Not gonna happen. You and me are going on a trip down memory lane. It’s time you remembered the true meaning of wrestling.” And without a moment’s hesitation, Hogan (with Vince in tow) leapt from the window and began plummeting to the pavement below. Vince screamed like a frightened child, first because of the fall, and second because of Hogan. The descent blew the white sheet off of his face, revealing, not the sunked and heavily wrinkled face he expected, but the puffy, yellow-mustached face of Hogan from years gone by. He only noticed it for a second before turning his gaze back toward the pavement…which he was a second away from crashing into…

When suddenly, everything became very quiet.

And then, just as suddenly, everything became very loud again.

Vince dared to open one eye, only to find himself standing in a place he knew very well. He was next to a wrestling ring, with a blue apron surrounding it, and a house mic hanging above. There was a crowd of some 10,000 people cheering wildly.

“It is…this is my home…” Emotions fluttered through Vince’s body as he looked around for who would be competing. Suddenly the familiar voice of Howard Finkle spoke over the frenzy.

“Ladies and gentlemen” The Fink announced “Making his way to the ring, accompanied by his manager, Mrs. Elizabeth…Randy ‘Macho Man’ Savage!”

“Oh that’s my cue” Hogan said, before disappearing in a cloud.

The Fink continued: “And, in the ring…Hulk Hogan!” The crowd went ballistic. Vince silently watched as the past unfolded before him.

“WELL YA KNOW SOMETHING MADISON SQUARE!” Hogan paused to take in the adulation of the WWF fans. “NEXT SUNDAY, AT WRESTLEMANIA V, I’M GONNA TAKE BACK MY WWF WORLD HEAVYWEIGHT TITLE, AND I’M GONNA BEAT MACHO MAN FOR ALL OF YOU HULKAMANIACS.”

“WrestleMania V…” Vince mumbled to himself… “over 25 years ago…”

POOF! Hogan returned to Vince’s side. “You remember this, right brother.”

“Of course I do,” Vince said, puffing his chest out “This was the culmination of a year long story.”

“That’s right brother. A story that you gave the green light to a year earlier and had the patience to let it pay off here.”

“Oh..well, back in those days it was easy. Me and Pat Patterson would just hang out in my patio and knock out months of stories at a time…it’s not like today…”

“Well today we have a whole team of writers. They come up with stories for all of the talent and I give the okay.” Vince tried to turn his attention to the promo Macho Man was giving, but he couldn’t get past the disapproving glare Hogan was giving him. “What?!”

“You give the okay, brother?”

Suddenly Madison Square Garden blacked out, and in a flash everything changed. Now Vince was face to face with himself, albeit a younger version…one from the late 90’s.

“We need to change it up…I’m not liking Foley as champion!” Younger-Vince shouted to a younger-Vince Russo.

“Russo! That worm!” Hogan shouted and started toward him.

“I’m putting the title back on Rock.” Younger-Vince said, slamming his knuckles down on the table. “He can keep the title till WrestleMania 15.”

“Okay, but we’ve still got the Superbowl Halftime Special—” Russo started to say.

“So we’re doing Foley vs Austin at Wres—” Russo started to say.

“No, forget that. We’ll put the belt back on Rock!”

“You always used to be a little indecisive” Hogan said, as things turned dark again. “But you used to let stories play out…over time you became more and more impatient and unhappy…”

“Well it-it-it’s harder now. There’s more writers. More talent. More things to go wrong. I have to control it all! If I don’t–if things go off script, what could happen? Who knows what could—” As he spoke he never even realized he was back in his bed again. He stopped suddenly and looked at his phone. It was still 1am. “Harumph!” Vince scoffed. “Just a stupid dream.” He started to toss his cell phone down but instead checked the alarm clock app. No alarms set till 5am. “Good.” And he laid down and fell asleep.

Until, at 2am…the clock chimed again.