GONG…the sound of Vince’s cell phone alarm once again awakened him. He shot out of bed like a cannon and quickly grabbed his phone. The time read 1:30am. This time he didn’t even bother trying to convince himself it’s all in his head. He knew he was soon to be visited. Not that he would have had the time to convince himself of anything, since before he could even think the sound of trumpets blasted in his ears. Vince quickly grabbed his pillow and folded it over his ears, muffling the sound of John Cena’s entrance theme. He waited and waited but Cena never came. Finally the music died and everything was back to normal. Vince looked around and finally got out of bed to inspect everything. He wandered to the bathroom but found nothing. Then, just as he turned back toward his bed, he saw him.

“Wait a minute…” Vince said, examining the muscle-bound hero standing before him. “This IS a dream…”

GONG!…the sound of Vince’s cell phone alarm once again awakened him. This time he lazily reached over and checked it. The time read 2:00am. “Rarghdreamingurgh” he mumbled to himself, turned off the alarm and rolled back over.

“Vince…Viiince…time to get up…” A familiar voice whispered in his ear.

“rrrrno” Vince said, draping the sheet over his head. “no more dreams.”

“This isn’t a dream Viiiiince” the voice whispered. “It’s–JOHN CENA!” He shouted as the familiar *do doodo doo* trumpets blasted in his ears. 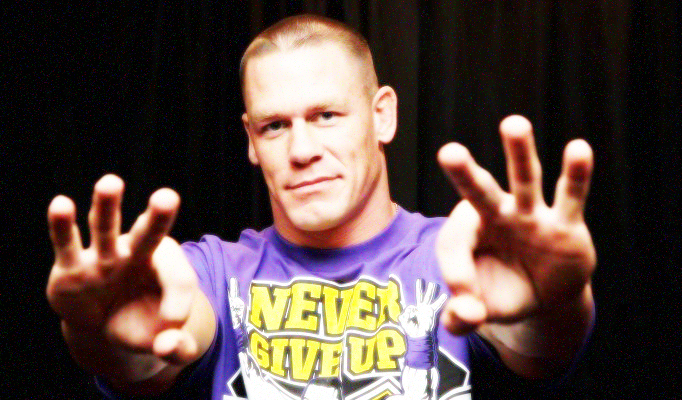 With a scream Vince fell out of bed onto the floor. He looked up to see the goofy smiling face of John Cena—clothed—staring down at him. “What now!?” was all he could muster.

“I’m here to help you discover the true meaning of wrestling.” Cena said, loosening up his bicep scrunchie.

“You’re too late, Hogan’s already done that.” Vince said, waving him away.

“Hogan? Did you learn anything?”

“……I’m going to leave that last part alone and focus on the beginning of that.” Cena deadpanned as he picked Vince up in a fireman’s carry…and then quickly slammed him onto the bed.

“What are you doing?!” Vince said as he bounced and rolled off the other side.

“Oh sorry…habits. Come on and get dressed. We’re going out.”

“Out…where? You’re not going to make me relive another road to WrestleMania are you?”

“No no no. I’m the Ghost of Wrestling Present–” Cena began.

“–and a fine present you are. You’re the face of the company till the day you die.” Vince said with pride.

“That’s part of the problem, Vince. Get up….oh and don’t mention the “d” word…he’ll be along later.” Instead of picking Vince up, Cena instead grabbed his hand and opened the window.

“Ready…I guess.” Vince feigned annoyance, but he would have been lying if he said he didn’t feel all warm and tingly holding Cena’s hand. He had been terrified of his leap from the window with Hogan, but with Cena right beside him he felt right at home. He even tilted his head down to Cena’s shoulder for extra snuggling.

“Stop that.” Cena said as they jumped from the window onto the city below.

They fell at terminal velocity but landed as lightly as feather. “Where are we going?” Vince asked.

“Downtown, to the cheap hotels across the tracks.” Cena did that stupid thing he does when he runs, and together he and Vince zipped across town, and ended standing outside of a Motel 6.

“Ugh, what are we doing here? Have I got to learn how to be charitable to poor people?”

“Something like that. Do you know who is staying at this hotel?”

“It’s one of your jobbers…Heath Slater.”

“Slater…is he still employed?” Vince asked as they climbed the stairs to the second level. The curtains over the window of slater’s room were cracked a bit. Cena and Vince peered inside.

“Look at the conditions you force your employees to keep.”

“Up bup bup…not employees.” Vince said with a finger in the air. “They are independent-contractors.”

“Independent Contractors with a contract that forbids them from working other gigs or profiting in any way as a wrestler unless they are wrestling for you. Right?”

“Look at poor Slater…is that…a VHS tape of Starship Troopers he’s watching?” Cena shook his head with a big pitiful frown on his face. “How terrible.”

“I agree. He’s got three house shows to work next week. He doesn’t need to be wasting his time with…whatever a Startshiptoobers is.”

Cena grabbed his arm again and drug him to another room a few doors down. There was laughter and joy booming from this room. Whoever was inside was not letting the poorness of their surroundings dampen their wrestling spirit. “Look inside here and see three of your most talented and popular acts.”

“They’re recording a video of themselves playing a game for a youtube page that Woods runs.” They’ve used the internet to reach a greater connection to the WWE Universe because your writers have stifled creativity at every turn.

“ahhh……..which one is Woods?…and NO that’s not true. We let New Day go out and do whatever they want.” Vince argued.

“Only now. At first they were a shucking and jiving trio of black athletes that the crowd hated. Why is that anyone who you try to write as a popular character ends up getting boos, but whenever you let them create their own characters, they become insanely popular?”

Vince ignored the question as he was too busy looking around the room through the window. “Say…where’s the other New Day Member…Larry or Karl whatever his name is?” SLAM! The familiar sound of a body getting AA’d caused Vince to turn around, only to find Kofi Kingston getting slammed by Cena. “What are you doing?!”

“Sorry…habits.” Just then Heath Slater stepped out of his room and walked toward them.

“Hey Mr. McMahon, have you come to join the party we’re hav—” SLAM! Another AA silenced Slater.

“Stop that stop that!” Vince shouted.

“Sorry…I’ve been trained too well by you. Whenever I see someone who is either popular—” Cena said as he helped Kofi up. “—or someone who entertains in his own little way—” Cena continued, picking poor Slater up off the floor. “—my instincts kick in and I kinda have to…well…”

“If this keeps up, we’re not going to have any entertaining acts left for me to bury. Then what will we do?” Cena asked, as the hotel around them started to dim. As everything went black Cena disappeared from sight, leaving only Vince to stand alone in the middle of a darkened void.

“Cena? Come back Cena!” Vince shouted, but there was no response.