GONG! The thunderous sound startled Vince for a moment.

“Not again!” He quickly reached for his phone to silence the alarm but was surprised to see it wasn’t going off. The clock read 3:00am.

GONG! The sound echoed across the darkened void where Vince was standing.

A third GONG reverberated and with it, the familiar flashes of lightning and the sounds of a funeral march filled the air. Appearing as out of thin air, the Undertaker stepped toward Vince. His face was sunken and wrinkled, his beard a stark white, but there was no mistaking him. He still wore his familiar hat and trenchcoat and looked as intimidating as ever. 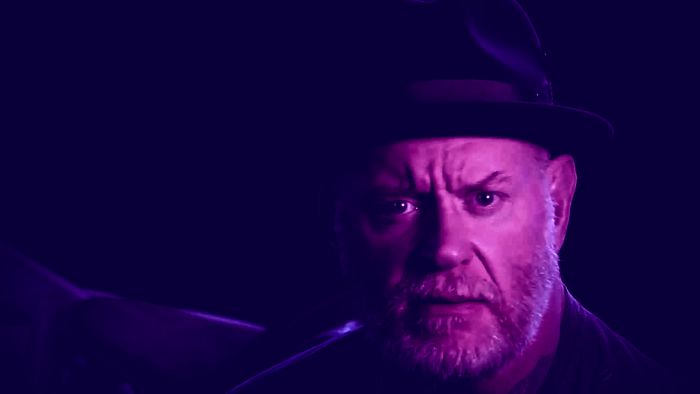 “You must be…the-the Ghost of Wrestling Future…” Undertaker stood face to face with him but did not answer. He didn’t even act as though he heard Vince at all. Instead he pivoted and turned toward a ring that had—unbeknownst to Vince—materialized nearby. The Phenom climbed the steps and entered the ring. Already there and waiting for him was John Cena. “John! Thank goodness, John!” But though Vince shouted Cena did not hear him. Looking at him, Vince noticed that Cena looked different than he had just moments earlier at the hotel. His blond hair had streaks of grey and his muscular frame seemed a little slimmer. “John what’s going on!” But still neither man could hear. Vince noticed on the ring apron the logo for WrestleMania and he had a feeling of excitement come over him. Finally another voice entered his ear and he looked around for the source.

“Rich Brennan and Daniel Bryan back here at WrestleMania 40 getting set for the bell to ring on our main event. John Cena vs Undertaker.” Vince meandered over to the commentary booth, keeping his eyes on the aged sports entertainers circling each other in the ring.

“I can’t wait Rich” Daniel Bryan said. He too had grey running through his beard. “This is the last time we’ll see these two as per the stipulation.”

Suddenly, just as Cena and Taker were about to lock up, everything turned black.

“What happened? What’s happening now?!” Vince demanded, to no response.

The darkness turned into a grey fog that stretched all around him. He walked around, trying to find an answer, when suddenly he tripped over a stone and fell to the ground. Looking back he noticed the stone he stumbled over was in fact a tombstone (not the piledriver but an actual tombstone). Laying against the stone was a Wall Street Journal newspaper that had a headline that shook Vince to the core. The headline read “WRESTLING EMPIRE FINALLY GOES UNDER! LOW RATINGS AND DECLINING INTEREST KILL WWE~ FINAL MAIN EVENT: CENA vs UNDERTAKER PART FIFTEEN!”

“No!” Vince shouted. “I don’t believe it.” He scurried backward, trying to put distance between himself and the paper but he didn’t get two feet away before he ran into The Undertaker, who had been silently watching him.”

“Believe it.” Undertaker said, with his patented slow growl.

“No. I refuse. You expect me to believe that it all ends…like THAT! Vince pointed at the newspaper. “After almost a hundred years in this business you mean to tell me they STILL call it a wrestling empire?!”

“You went under, McMahon. Face the facts…or at least, you’re going to go under.”

“To who…who bought me out? Who took over the market?” Vince demanded to know.

“No one. You monopolized the market and then you killed the market. There was no one left who called themselves fans of pro wrestling.”

“Yes but what about fans of sports entertainment?” Undertaker didn’t answer him. “And why are you the Ghost of the Future? I mean sure you’ve got the whole Grim Reaper thing, but—no offense—you’ve been at this for a long time. You’re not exactly ‘The Future’ if you know what—”

“You old fool.” Undertaker said. “Don’t you get it? I’m the future because I’m all you’ll have left in the end. Even now you’re relying on me to carry your PPVs and boost your ratings. You’ve burned through all your midcard acts, never developed them into main event talent and in the end all you’ll have left are the handful of yesterday’s superstars and John Cena.”

“It’s enough to put you under. You cared too much about trying to handpick the next guy to be the face of your company you stopped listening to the fans.”

“Yes and for a time you had the magic touch” Undertaker said. “Hogan, Hart, Michaels, Austin, Rock, Cena….”

Undertaker only shook his head. Vince’s eyes grew wide and scared. “No. It can’t end like this. I’ve said it a thousand times. I’d rather have a half-full arena cheering the guy I picked, than a full arena cheering for someone else. That’s my philosophy and it’s not steered me wrong, yet. It can’t steer me wrong!”

Undertaker took a step toward Vince, which moved McMahon a step toward the tombstone and newspaper. “Vince, now a days you have a half-full arena booing the guy you picked. So what about your philosophy now?”

“If you don’t, this is your future.” Undertaker took another step toward Vince, who took a step back and suddenly fell into the now-open grave. He landed with a thud and watched as the newspaper fluttered down toward him. The last thing he saw, were the words “WWE GOES UNDER!” falling onto his face.

With a…well, a “Thud”…Vince landed on the floor of his hotel room. He looked at his cell phone: It was 5:00am the next morning.

“It’s the morning…I have another chance!” He said, excitedly. “The spirits have given me another chance!” Quickly he threw an overcoat over his boxers-and-tanktop sleepwear and burst out of the door. The first person he saw was a lad just coming out of his hotel room. “You there, son, come here.”

“Do you know that wrestling promotion we run…NXT?” Vince said.

“Wonderful lad. I want you to go and get it. We’re going to make that the new WWE. The booking, the freedom, the storytelling, all of it is going to become the new normal around here!”

“Truly sir?” The lad said, unable to contain his glee.

“Yes. It’s time for a new start around here.” Vince said. “Go on and spread the word!”

“And a very Happy Wrestling to you too!”

Vince was true to his word. He handed the reigns over to the future and listened to the fans to guide the general direction of the company. A new era of excitement came over the business. Female talent was treated humanely, midcarders were given storylines, characters and time to develop, main event talent was broadened to include many more talented wrestlers, and fans were happy. Vince was happy. We all were happy. And we all lived happily ever after.