With eighteen seasons down, you’d be surprised to hear that a television series was still going strong after all this time. Fans of The Simpsons will argue about which season it was where it really started to decline but, in truth, it is floundering in rehashed stories and ideas. It’s the same for the majority of comedies, let alone animations, that they grow more and more stale as the series goes on. However, South Park is different. It has deployed a formula that keeps the show fresh after all these years. A mixture of satire, episodes based on recent events and parodies of movies and their plots, often with the writers’ own creative twist have kept the show relevant. 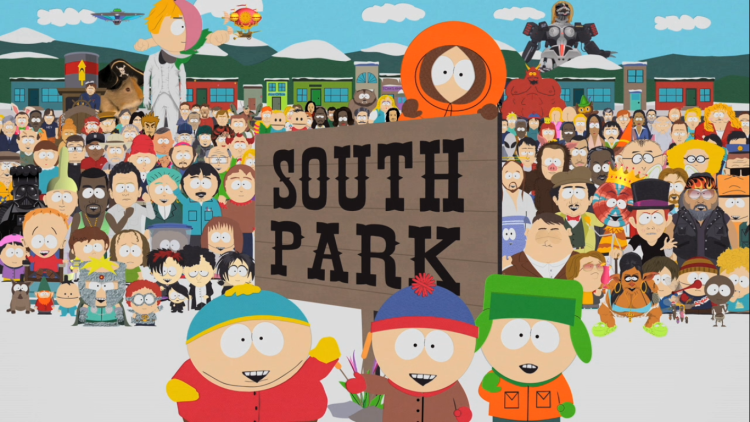 The first few seasons of South Park were based on original ideas from the writers Trey Parker and Matt Stone. These were very entertaining episodes but they certainly weren’t very politically correct. You have the four main kids Stan, Kyle, Cartman and Kenny and an array of characters all guilty of “potty mouth”. Straight away, it was clear this was not a cartoon for kids despite being centred around four 8 year old boys.

South Park let you know from the very beginning that anything could happen when the pilot episode involved aliens. This helps from a story point because nothing had to be realistic, there were aliens, journeys to distant planets, Mr Hankey the Christmas Poo and Mecha-Streisand. That’s without mentioning that in the first seasons, Kenny would die every episode and return the next like nothing happened. Somehow, South Park made a child’s death, in a number of graphic and brutal ways, a succesful joke that entered popular culture.

Without being grounded by reality, it was easy for South Park to start parodying movie plots and satirising current affairs. Sometimes, these two would combine. This meant that the South Park writers no longer needed to come up with completely fresh ideas but they did have to put plenty of work into making the story entertaining. Movies and current affairs give South Park a continuous feed for episode ideas so there is no need for recycled storylines or big twists to keep the show interesting.

The satire often revolves around society or celebrities, such as the episode titled “Night of the living homeless.” In this episode, the homeless are portrayed as zombies, walking slowly and surrounding people, asking for ‘change’ to people who rapidly pass by. Then, the people who are caught up in a homeless crowd, give away their money to them and, in turn, they require change themselves and thus they are converted into homeless. Then you have Al Gore and his ‘attention seeking’ theory about ManBearPig in reference to his talks on global warming.

The most effective satire often comes from when South Park parodies celebrities. One particular episode that comes to mind is an episode all about Britney Spears. The episode focuses on the media putting Britney Spears down, questioning her weight. This episode suggests that America always picks a young pop star to build up so they can tear down, in this case, it is for the purpose of a successful harvest. Besides the harvest, that point remains very valid and the episode ends with a news report building up Miley Cyrus (still in her Hannah Montana days) as the next big star where it is suggested she will be next to be built up and then criticised, which is true today.

South Park has always been an equal opportunities offender where no person, religion or organisation is safe and no joke is ‘too soon.’ Particularly in the early days, the offensive nature of South Park got people talking about it rather than the quality of the episodes. It’s hard to say if South Park is just as offensive now or if it’s just a case that regular viewers are used to the taboo topics being mentioned. However, it seems that South Park is not just offensive for the sake of being offensive. Quite often, there is actually a moral message in the episode and you could often hear the line “you know, I learnt something today” from one of the kids. South Park usually takes the story to the extreme in order to strongly portray the moral message. There are episodes that take risks with religion, sexuality, race, nationality and domestic abuse. While these are taboo topics and South Park may make light of some aspects, the episode will often end on a positive note and it is clear who is in wrong during that episode.

South Park has gone from strength to strength and the critically acclaimed video game “The Stick of Truth”, which was only released last year, was a huge success showing South Park has maintained its relevance. Fittingly, the game satirises the features of other games and benefits from Trey Parker and Matt Stone’s input. Now, with another game announced, the future still looks bright for South Park with a continuous source of stories from movies and current affairs alike.