TNA: How do you fix Jeff Hardy?

Well hello. Welcome once more to the column that comes with a 100% guarantee of usage of the word “shenanigans” this week. See? Already used it. You can take my word to the bank, people.

Only one story dominates the wrestling landscape this week… that’s right, Taz and his shocking inability to recognise a Minion from ‘Despicable Me’, Seriously though, Jeff Hardy has been this week’s story, and rightly so.

From the moment he staggered down ramp looking for all the world like the squared circle equivalent of Charlie Sheen, to the moment Sting agreed with the TNA fans assessment of the so called “Main Event”, Hardy’s antics have been dissected, discussed, and debated on every corner of the Internet’s wrestling community.

I’m not gonna give you any ground breaking insight on him, nobody bar himself and possibly Matt really can, but it’s obvious he was in no fit state to be wrestling. Personally, I would have thought twice about sending him out in public view at all.

It would have been no real problem for TNA to shoot some kind of angle backstage where he was jumped, and have him (or a lookalike) bundled into an ambulance or at least out of commission for the night, and used someone, anyone into his slot in the main event. There were genuine, viable contenders that could have been slotted in who didn’t have a match at the show – Samoa Joe, Pope, Angle – and at least had some kind of main event match, rather than the farce TNA presented us with.

The fact that the #1 contender’s match right before it went to a no decision blows my mind. Why not give SOMEONE the win, and have them work a quick match with Sting. Even just go for 10 minutes, and end it with a run-in (something TNA and Russo specifically are usually good at) and a mass brawl to finish the show.

Sting looked absolutely disgusted before, during and after his “match” with Jeff. The look on his face spoke volumes. He was in the ring with a man who wasn’t in control of his actions, in a business where protecting your fellow workers should be the priority. Jeff’s mind was clearly not in the right place to be in a ring, in any kind of match. 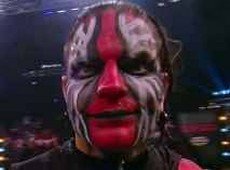 It’s not the first time Jeff has screwed up, it’s not a surprise to anybody, except perennially nice and gullible TNA boss Dixie Carter and her desire to be nice to everybody and doesn’t see the bad side of anything. Dixie probably still believes in Santa Claus and the Easter Bunny, too.

Jeff was given an ultimatum by the WWE – go to rehab or you’re fired. Jeff was subsequently fired as he refused rehab. Right there, that should have been a big red flag to any company wanting to hire him. That, and the court case hanging over him that still hasn’t been settled for whatever reason…

What happened at Victory Road was a time bomb waiting to go off in TNA’s face, but it was one of their own making. They should never have taken a chance on, let’s face it – a junkie like Jeff Hardy. What kind of example do they think that sets for the rest of the roster? How do they think it makes them look in the eyes of the general public?

TNA took the step of issuing customers who bought the PPV with a code to redeem 300 hours of their on demand service as an apology for the show ‘running short’. The last people that TNA should be alienating is the brave souls that pay their hard earned cash to buy the PPVs, however few they may be…

All of this falls squarely on the shoulders of Jeff Hardy. In the real world, you turn up for your job in the state he was obviously in, and your feet wouldn’t touch the floor on the way out of the door. In TNA, he’s still given the chance to perform in the main event on a PPV show. Sheer stupidity on TNA’s part.

Jeff shouldn’t be allowed to step foot on TNA television again until he’s been to rehab, and passed a string of drugs tests. Of course, with TNA that’s about as likely as me winning the lottery. The minute Jeff is free and able to perform, after whatever slap on the wrist TNA give him, and after any of his legal problems float away, Jeff will be welcomed back, put back on TV and given a huge push as a ‘reward.

For his behaviour at Victory Road alone, TNA absolutely HAVE to discipline him, to take some action against him. He cannot be allowed to tarnish a show, and a company’s reputation in such a way. He has become a liability, to be perfectly honest. Enough is enough, and now is the time for some aciton.

For TNA’s sake, and more importantly, for Jeff Hardy’s health – something has to be done, and done now. Jeff is on a dangerous path, and somebody needs to step in and try to get him sorted out before he ends up another name on the list of wrestlers dead before their time.

Until next time, have fun, go mad.