Montel Vontavious Porter or MVP for short is one of the most talented wrestlers of his generation. However it wasn’t all plain sailing for the Miami, Florida grappler. In his youth he spent six months in juvenile detention for robbery and spent a further 9 1/2 years in prison for armed robbery and kidnapping which started when he was only sixteen.

Since then the 40-year-old has gone on to wrestle in North America with WWE, over in Japan with NJPW and he made his debut for TNA at their Live episode of IMPACT! from Glasgow on January 30th.

We caught up with MVP to talk about making his TNA debut, the company competing with WWE, dream wrestling matches and so much more. 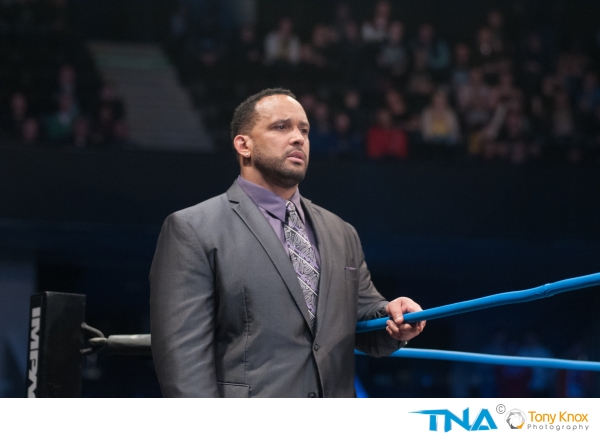 It was my correctional officer who introduced me to professional wrestling. He was an Indy wrestler and I used to ask him questions and he asked me if wrestling is something that I would be interested in.

I was looking for a hobby as I was going to be getting out of prison and it is through my correctional officer I met Norman Smiley. By the time I met Norman I was already in wrestling school and training so the building blocks were there and he added to it.

I grew up in Miami so I used to go to the Miami Beach Convention Centre with my mum. Gordon Solie was the soundtrack of wrestling for me growing up and I was a huge fan of people like Dusty Rhodes and Ric Flair, even though Ric was a heel he was ridiculously cool. Being in the south we didn’t get as much of the old programming but I remember reading the magazines and seeing guys like Rocky Johnson and Tony Atlas and as I kid I knew when I grew up I wanted to look like that.

As far as WWF goes everybody was big (Hulk) Hogan fans, but we should have known that I was going to go down the wrong path as a kid because I was a Rowdy Roddy Piper fan. I just thought Piper was awesome, he was a bad guy and everybody hated him but the whole say your prayers and eat your vitamins didn’t work with me, I liked Piper, I thought Piper was cool, he went against the grain.

Norman Smiley gave me my first ever wrestling tape and I remember watching the matches on that tape and it was so physical, so brutal and in the business it is what we call stiff. Immediately I knew that is what I wanted to do, Japanese wrestling was brand new to me but Japan was always a place that held a certain allure for me – wrestling aside, I just love the history, the culture and the people. Then when you add in that wrestling was massive over there that just sealed the deal.

You are now with TNA, what was that like making your debut at the live television show in Glasgow?

It was spectacular, it was exasperating to have been away for so long and to come back and receive the reception that I did was humbling. The fans remembered me and they were glad to have me back. The whole tour was awesome, after Glasgow we did Manchester and London and it reminded me of why I love it so much.

The conformation didn’t come until less than two weeks before I came over, I still don’t have a signed contract, our lawyers are working out the last little bit of the deal so I’m here on a handshake. But I expressed to the company when I do make my debut I wanted to do it on the UK tour. 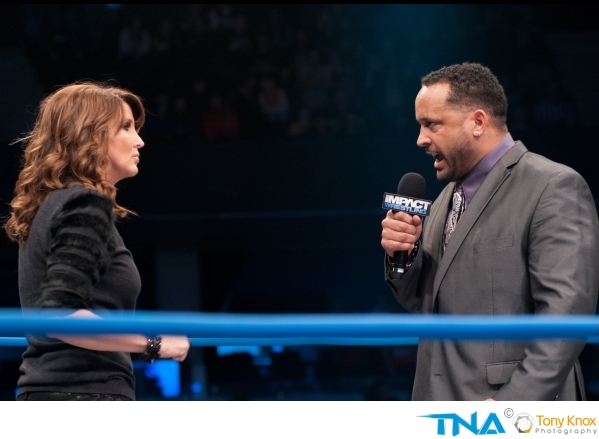 TNA are working with Wrestle-1 in Japan, is that something that excited you about joining TNA?

Absolutely, it was something that we had discussed, part of my deal is that I’m free to make appearances for Independent promotions or International promotions. When I heard that TNA had a working deal in place with Wrestle-1 I expressed my desire to return to Japan as a representative for TNA in whatever capacity. That is something they assured me would take place, so that was definitely a factor.

Do you think we could see more wrestlers out in Japan coming over to North America with either TNA or WWE?

I believe so, it’s possible and if I’m able to facilitate that in any way I intend to. One of the things that TNA is trying to do right now as you can see by adding myself and The Wolves (Davey Richards & Eddie Edwards) to the roster is adding new fresh faces and quality talent. I think it’s an exciting time for TNA right now because there are new signings coming down the pipe if you will and TNA is making an actual effort to sign new talent and freshen up the product, so I’m really excited about the future.

Since you’ve been away have you watched much of TNA and what did you think about the company before you came in?

I’ve said for years even when I was with WWE that I want TNA to do well, I never saw TNA as the enemy – that would be ridiculous, I love professional wrestling. Part of the reason why I chose to go to TNA was because it’s not good for the fans or for the industry when there is just one conglomerate and nowhere else to go.

The most prosperous and entertaining time in our business was during the Monday Night Wars – you had two companies that were fairly evenly matched, both with top tier stars, and they were battling with each other for ratings. That meant everything had to be fresh, everything had to be edgy and everyone really had to rack their brain to come up with exciting storylines, all of the guys had to work really hard and there were 12 million people a week tuning into wrestling.

Now there is less than half that, if you’re in the wrestling industry now in the States there are only two places to go centrally, WWE or TNA. I would like to try and help facilitate, creating a situation where the WWE has to recognise TNA as a potential competitor and if you know like I do, WWE holds all the marbles then for the artists, the talent it’s not good for our business, competition is good for business.

You mentioned you watched TNA whilst in the WWE, do you know if Vince McMahon watched TNA?

Honestly I couldn’t tell you if Vince watched TNA or not but I’m sure there were people in place to keep tabs on what was going on around the industry with the other wrestling companies. Whose job I don’t know, I was never involved in that aspect of the company, but all of the guys in the locker-room we were aware of TNA, we watched. Even though we worked for WWE we’re all wrestling fans so we would pay attention to the product.

Who are some of the guys your looking forward to having matches with in TNA?

I made the stipulation very clear, if I were to come to TNA I would absolutely have to work with Kurt Angle, Samoa Joe and Bobby Roode at some point. Those are the guys that are on my list. Fortunately I had my first match with Booby Roode the other night at Wembley and we had probably about nine minutes, so it was a chance to test the water, I definitely like his style, I like his work.

Kurt Angle is a legitimate legend and Joe and I have been friends for a long time, he is a guy I’ve wanted to face for years going back to the Indy’s. Those are just a few of the guys I’m looking forward to working with, one of the things that attracted me to TNA is the overall roster – they have top tier talent.

You’ve been working closely with Magnus and Rockstar Spud since coming into TNA, what have you made of the British guys?

They are both tremendous talents, I’ve had the opportunity to work with Spud quite a bit because of our roles and he is a guy that gets it, he understands what a heels job is, what a heel is supposed to do, he understands the business and the psychology  and he is brilliant to watch, very entertaining. I know he is good at what he does not just because of own my assessment but because my timeline on Twitter was full of people telling me once I take over the company to get rid of Rockstar Spud, so that tells me he’s rubbing people up the wrong way as he’s supposed to.

Magnus, I’ve watched him over quite some time and I’ve been able to spend some time in the ring with him and I can see him growing, I can see him learning and I can see him improving. Both of those guys are tremendously talented, filling their roles well and they are only going to get better, it has been a pleasure to work with them.

Lockdown is coming up in Miami, are you looking forward to that?

Yeah, March 9th in my hometown of Miami, I will be heading home for the first time in quite some time with a different wrestling company and I’m looking very forward to that. My team is going up against Dixie Carters team in Lethal LockDown and Jeff Hardy is going to be returning to TNA on my team.

Your new entrance music in TNA is your new single, was that something that attracted you about going to TNA?

Right before I left WWE I composed my own theme song and it made it to the air a few times before I left. With TNA it was definitely something we discussed and I expressed that if I come over I do want to compose my own theme music.

I had seen what they had done with Mickie James and Jeff Hardy musically and that is an aspect of my creativity that I would like to explore some more. They were completely supportive and it is something we will delve into at some point.

My new theme song in TNA is called ‘Return of the Ronin’ and for those that don’t know a Ronin is a Japanese word for masterless samurai and in the wrestling industry that is how I see myself. I serve no master, that is why I have been able to go from WWE to NJPW and TNA.

For more information on MVP you can visit MVP305.com and follow him on Twitter @The305MVP. MVP’s new single and TNA theme song, ‘Return of the Ronin’ is available on iTunes.