Jim Ross is one of the greatest wrestling announcers of all time and for many years was ‘The Voice’ of WWE television.

Ross made his WWE debut on the grandest stage of them all, WrestleMania IX. He is also a former company executive of WWE as well as a talent relations consultant. JR was inducted into the 2007 WWE Hall of Fame.

We caught up with ‘Good Ol’ JR’ to rundown this year’s mammoth WrestleMania 31 card which will be taking place for Levi’s Stadium in Santa Clara, California. 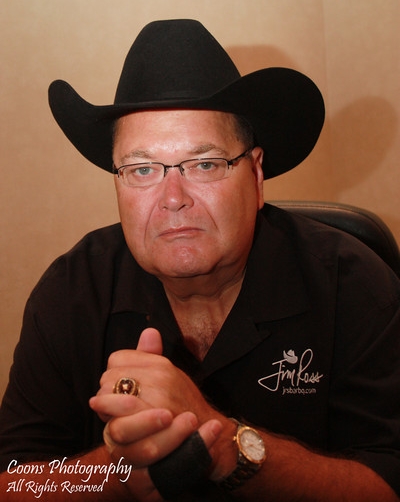 I’m very happy for everybody that is going in, it is special for them and their families. I know how they feel, it was a wonderful honour for me to be inducted in 2007. Far be it for me to judge if this class is better than last years, is this class the best ever, where does this class rank? I don’t know if I have the skill and I certainly don’t have the inclination to judge it in that respect but everybody that has been included has earned the distinction and I’m very happy for them and their families that they are going to be honoured at such a prestigious event.

It’s something that you never forget and getting that Hall of Fame ring is a real memorable moment, I think this year’s class is a very unique group and they all bring something a little different to the dance, so I’m looking forward to watching it on Saturday night.

This is the year the decision was made to bring him in, it’s obviously too bad he wasn’t inducted when he was still alive but unfortunately that didn’t occur and he died young and he died unexpectedly. He is certainly well-deserving of Hall of Fame distinction and it’s sad that he isn’t going to be here to enjoy the moment in person. Obviously, it’s a great moment for his family and for his fans, there’s a lot of Macho Man fans.

I think John Cena wins the United States title, and goes about his business of trying to regenerate his popularity, so I see Cena winning. If WWE is really serious about Rusev’s undefeated streak then Rusev would win perhaps by sportsmanlike means. I think from what I’ve seen and the build, John Cena is going to win and he will go about his business of helping add an additional shine to the luster of the United States title.

I think Rusev has a great upside, he’s got wonderful potential, he seems to be getting better and better at what he does. There are a lot of nuances that a wrestling villain has to learn that you can’t learn in a year or even two or even some people would say five years. It is a very unique art form to be a wrestling villain but he seems to be very dedicated and I like what he has done thus far in WWE.

Those that think one loss to John Cena at WrestleMania is going to derail Rusev or be detrimental that it would do terrible harm to his career is really looking at the situation erroneously in my opinion.

I think the winner will come from a trio of; Daniel Bryan, Dolph Ziggler or Dean Ambrose. If I had to pick one of those three I would probably pick Daniel Bryan, Daniel Bryan is extremely popular with his YES! movement, the Intercontinental title isn’t popular right now, it hasn’t got the shine and luster that it did have at one time and a wrestler like Daniel Bryan can do a great deal to add the much-missed credibility to that title.

No one can argue the point that both the Intercontinental and United States titles need help, they need to add credibility back to those championships and men like John Cena and Daniel Bryan can do just if they’re able to hold the title long enough to really establish some tenure.

If I was doing the booking based on what I know which is not any more than what anybody else knows, just my own personal taste I would say that Cena and Bryan would be great winners and when you have two live events a night like WWE does you can have one guy headlining one show and the other guy headlong the other show, which gives both live events a better chance of being successful.

I don’t know if the build-up to this match has been overly significant, the last two or three weeks they’ve had some issues. Randy Orton is such a big star and is established, if you look at the bigger picture the win by Rollins would probably be more significant in the grander scheme of things for WWE in the long run.

Just looking at it from my eyes I would lean towards Seth Rollins winning the match, I wouldn’t do a lot of wagering on that prediction but I do think if you look at the bigger picture for WWE if Rollins wins it helps the big picture build the young talent.

I’ve known Sting since his rookie year, I’ve known him his entire career, he is one of the most honourable, respectful and respected men in the business. This is his WrestleMania moment, at his stage of the game I don’t expect him to have another one, I think he will have one WrestleMania appearance and I’m hopeful that he wins his match on Sunday. If I had to gamble, I’m not a gambler but if I did I would bet my money on Sting winning and it would be his WrestleMania moment and it couldn’t happen to a nicer, classier professional.

I think this match will exceed the expectations of most fans, too many fans are too concerned about the age of Sting and the inactivity of he and Triple H. Toby Keith my friend, the country music singer said, “I’m not as good as I once was, but I was good once as I ever was,” and I think that is applicable to both of these men, I’m going to go with Sting to win this match on Sunday.

I think they have set this up beautifully, I would not have had Undertaker on TV whatsoever, the first time that I would see The Undertaker if I was calling the shots would be on his entrance at WrestleMania and it looks like that is what it’s going to be, I think it’s perfect!

Again some fans will say that will kill him, it will destroy him but unfortunately, those fans just aren’t versed in the science and booking of pro wrestling as they think they are. The Undertaker can make Bray Wyatt a huge star and not have Bray Wyatt win the match. Simply being in the ring with The Undertaker and having a great performance is wonderful so that’s my take on that, Undertaker wins and Bray Wyatt’s star shines even brighter.

Will this be Undertakers last WrestleMania?

I have no idea and I’m guessing as is everybody else that says they know, the fact is they don’t know, the only person that knows is Undertaker. I think for him to have the opportunity to go out in his last match in his home state in a stadium that, for wrestling, seats over 100,000 people [WrestleMania 32 will be held at the AT&T Stadium in Arlington, Texas ] is an amazing opportunity for his last match.

Whether it happens or not I have no idea but I do know that the table is set for an amazing exit if the trigger is pulled for that event – home state, great stadium, he’s a fan of the football team that plays there, the Dallas Cowboys, it’s the greatest indoor stadium in the world. I think it will be a great opportunity to call it a day at that event next year.

It’s too close to call but it should be very interesting to see how it all works out. I am a Brock Lesnar fan, I signed him to WWE, I helped recruit him, I’ve known him since he was in college and university and I’m a big fan of his. I’m happy he decided to stay with WWE and I’m even more excited about what could happen between two magnificent athletes on Sunday.

Now we don’t know, does Lesnar retain the title because he is staying with the company or does the company do some shenanigans and put the championship on Roman Reigns who could theatrically be a Paul Heyman disciple. It makes for some interesting drama and that is why this Sunday’s WrestleMania is going to be so entertaining.

Will Seth Rollins cash in his Money in the Bank briefcase?

I have no idea, but it depends on what kind of condition both Reigns and Lesnar are in. I don’t know, that could happen I assume, Seth Rollins is the wildcard, again another reason to watch WrestleMania.

Everybody can complain and bitch and moan about the build-up as if everybody is a booker and have done it before. Now we are talking about all of these things and we’re not sure what is going to happen, we had another card play just this week that Lesnar is staying with WWE, it makes everything so perplexing, it’s a very unique situation. The build may not have suited everybody but where we are today and leading into Sunday now is extremely intriguing and something I will certainly not miss for anything, I will be watching just like any other fan very intently and very closely.