Dustin Runnels career has been fittingly eccentric. He started out as a generic country-fied grappler, “the son of the legendary American Dusty Rhodes.”  In fact his first six years as a wrestler for both the WWF and WCW saw him defined under just those nepotistic terms. It wasn’t until he was fired from WCW for blading during a match (which was against policy at the time) that he returned to Vince McMahon looking for another chance to make his mark on the wrestling business. The timing was right, because an idea was in Vince’s head that needed the right kind of superstar to pull off.

“Goldust” debuted in the fall of 1995 as an obsessive movie fanatic, with a fetish for Oscar-gold. In those days he wore a full body suit, which covered him from neck to toe in gold, with only a smattering of white. His face was almost entirely painted gold, accented by black around the eyes and lips. His mannerisms and character were the most sexualized that WWF (then still in the midst of the kid-friendly “New Generation”) had ever presented. There was no subtlety here: Goldust would blow kisses at his (male) competitors while touching himself in ways that could only be construed as “risqué.”

His first major feud was at the top of the midcard, against Razor Ramon, whom he beat for the coveted Intercontinental Championship. The two were scheduled to rematch for the title on the constricted WrestleMania 12 card, in what surely would have been the number three match of the night (and a worthy showcase for Goldust, due to the Hollywood backdrop of the event), but Scott Hall was suddenly suspended and the plans were nixed. It was to be Runnel’s first WrestleMania but circumstances would prevent from being a memorable one…at least memorable in a good way.

Goldust did have a spot at WrestleMania 12: He competed against Roddy Piper in a “backlot brawl” that combined the worst of the late-attitude era’s hardcore matches, with a cheesy rip off of the OJ Simpson White Bronco chase (which by that point was already 2 years old, and the Simpson verdict almost six months old). The match had no official ending. It was an inauspicious start for such a promising character. He did end up wrestling WWF Champion Shawn Michaels later that year at an In Your House event, though it was a dark match that did not air on PPV.

At WrestleMania 13, Goldust was given a near-15 minute match with a rising star in Hunter Hearst Helmsley (Triple-H), but despite controlling most of the contest he ended up losing in order to help further the upward momentum Triple-H was clearly having. The rest of 1997 saw him fall down the card and slip into irrelevance. His weight had gotten out of control as had his character: By WrestleMania 14 he was “The artist formerly known as ‘Goldust’,” a thong-and-corset wearing, overweight jobber to the stars. A feud with Val Venis in late 1998 returned Runnels to the Goldust character, and though he returned with plenty of fan enthusiasm, he never advanced beyond the lower-midcard. At WrestleMania 15 he lost a four-corners match for the Intercontinental Championship. If you’re keeping score, that makes him 0-4 at the big dance.

By the summer of 1999, he had left WWF and returned to WCW, where he remained. After multiple uninspired gimmicks and feuds he went down with the ship and remained inactive from the end of WCW until the end of 2001. When he returned at the 2002 Royal Rumble, he was in far better shape than when he’d left, and was welcomed warmly by the WWF fanbase.

Once again, his WrestleMania moment was nothing special. In Toronto he competed against the Tough Enough winner Maven in a Hardcore championship match that ended in a no-contest when Spike Dudley came from out of nowhere to pin the champ mid-match. If you didn’t love the insanity of the 24/7 rule, you can’t be my friend. Still, it was one more WrestleMania and one more missed opportunity to put a spotlight on one of the more iconic and fan-supported characters in WWF history.

Despite a popular tenure as tag parter with Booker T, Goldust would not be long for the WWF/E. He was released at the end of 2003 (without a match at WrestleMania 19), and would not return to the big stage until WrestleMania 22, where he worked the preshow in a multi-man match. He did the same thing at WrestleMania 25 (nothing in between) and WrestleMania 26. After that he slowly fell down the card until he moved backstage and began work as a manager.

It was thought that he would remain a backstage hand for the rest of his WWE career but an opportunity arose in late 2013, as the Authority angle was still very hot with crowds. Cody Rhodes had been fired and Goldust returned to wrestle the WWE Champion and Authority golden boy, Randy Orton, for the right to rehire his brother. This led to an angle that saw Goldust and Cody unite as a tag team and eventually winning the Tag Team championship. Despite plenty of support from the crowds, WrestleMania 30 came and went and though there was a Tag Title match on the card (in the preshow) Goldust and Cody–who by this point had lost the Tag Titles–were only featured in the Andre the Giant Memorial Battle Royal. His failure to win brought his WrestleMania win/loss record to a humbling 0-9.

After years of teasing, it looked like 2014 would finally be the year that Goldust would get a spotlight match on the biggest stage. For a character that has remained popular through the New Generation, Attitude, Ruthless Aggression and–somehow–the PG era, Goldust and his altar ego, Dustin Runnels, more than deserve to be celebrated at WrestleMania. Even better, the long-awaited Brother vs Brother feud looked to be the avenue to achieve that spotlight. A match that was thought to be a teaser happened a month prior, at Fast Lane, and though it ended somewhat inconclusively (with a botched 3-count by the ref) the rematch looks to have been nixed for WrestleMania. Stardust is set to compete in a ladder match for the Intercontinental Championship, and Goldust is left to half-heartedly carry on the feud through Twitter. 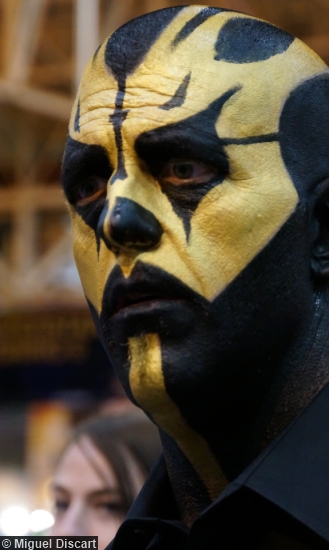 Despite an up-and-down career for Dustin Runnels, what can never be said is that he didn’t have passion for his craft. His ability to adapt the Goldust persona over the course of almost 20 years is remarkable. The work he has done as a wrestler since returning in the fall of 2013 has been the best of his career. A fitting payoff to such great veteran work would have been a retirement match on the biggest stage, but if they couldn’t make room for him on this year’s weak card, it’s doubtful they ever will.

It’s expected that he’ll make a second appearance in the Andre the Giant Battle Royal, but it’s unlikely he’ll win. If he doesn’t, he’s probably looking at ending his career with an 0-10 record at the Show of Shows.

That’s a stat unworthy of such an icon.

With any luck, he will still get that retirement match and that spotlight, maybe at Extreme Rules. Maybe at SummerSlam. Maybe it won’t happen at all; maybe he’ll just quietly disappear the way he did so many times in the 1990’s and 2000’s. Only this time it will be for good. Hopefully he will find his way down to Florida, where he can teach the rookies at the Performance Center a thing or two about embracing those bizarre Vince McMahon ideas to their fullest potential.

Without question Goldust–Dustin Runnels–should be a WWE Hall of Famer. Next year, as the event descends upon Dallas (not far from his Austin birthplace), would be the perfect opportunity to induct him, and to close the curtain on a brilliant–if under-appreciated– pro wrestling career.