By Matt Denton
Video Game Reviews
This page contains affiliate links. At no additional cost to you, we may earn a commission if you click through and make a purchase. Learn more

After the release of the last gen version anticipation was high for WWE2K15’s next gen release, how does it fare?

The graphical upgrade is the most obvious change between the two versions. Using their body scanning technology, 2K have upgraded the visual fidelity of the game to the next level. A great deal of it is impressive, while some has just missed the mark. I’m looking mostly at Summer Rae who looks like she’s mocking toothless people when she smiles (despite all of her teeth being on view). 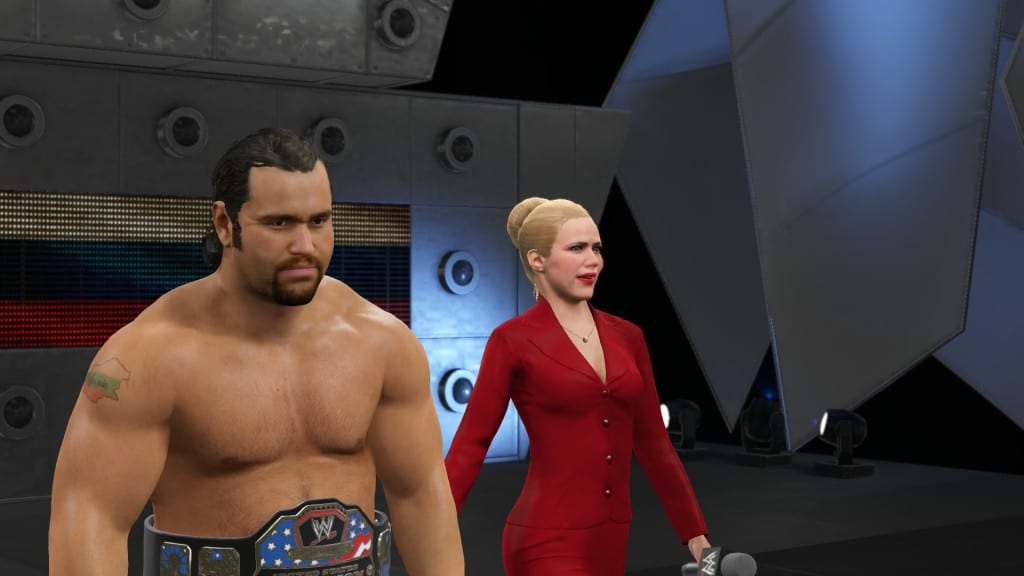 One of the major changes to gameplay  from the last gen version is a more realistic pace to matches. For the most part, you start off with a collar and elbow tie up and engage in a mini game to gain advantage. Stage one is a form of rock-paper-scissors, and from there is a find the hotspot mechanic which I found pretty easy to get in to. When the first level of stamina is gone, you can start dishing out grappling moves. That part is the most familiar, as it works the game as groggy grapples. No longer do you need to engage in a lock up to execute your lower level moves. Lowest level, you can engage in a headlock but that’s it.

One of the cooler things is that you don’t see the invisible grapple as much anymore. If you’re executing a chokeslam, your character will reach out like he’s trying to grab the throat. If you’re going to hit a superkick, you’ll throw a superkick. This is the same for the Bullhammer elbow, or the KO punch which adds more authenticity to matches. There are a few little things that also help in the illusion that you’re watching a match in progress rather than playing a wrestling game such as wrestlers crawling to the ropes when they are exhausted to help themselves up using the ropes. A new grapple situation where your opponent is on their knees where you can execute another version of a powerbomb or a suplex or even just throwing them back to the mat.

The AI at first is just about the same as most years, which is almost expected. The thing is that the AI could be better with a better logic system like Fire Pro or King of Colosseum 2. Cena still attempts a pinfall after the Five Knuckle Shuffle, rather than attempt the AA. The other thing is that the reversal system timings are slightly changed which can be disorienting for veteran players. That being said I have had some fantastic one on one matches. Tag matches are a lot more taxing because of the fact that it is way too easy for partners to break up pinfalls.

We’ve already heard plenty about how the creation suite is stripped back this year. Yes, it’s disappointing. But it shows that 2K are thinking longer term about the future of the suite itself when it comes to customizing your superstar, and for the first time since WWE Raw 2 customizing a WWE Superstar. For example, I happened to transform Erick Rowan into Sheamus, and the inverse or updating Seth Rollins so he’s wearing his current attire. It helps a lot, when you take into consideration how quickly the WWE moves. Cena gets a new shirt, and you’d have to wait until 2K16 to see it on his model, and by then his shirt would have changed another 3 times (and once more just before release so it’s inaccurate again.) Aiding the Edit a Superstar feature is the ability to import custom logos into the game using a web browser. If you can create it in Photoshop (other image editing software is available), you can bring it in. Pending taste, decency and all of that good stuff of course, so no dicks, porn or Chris Benoit. 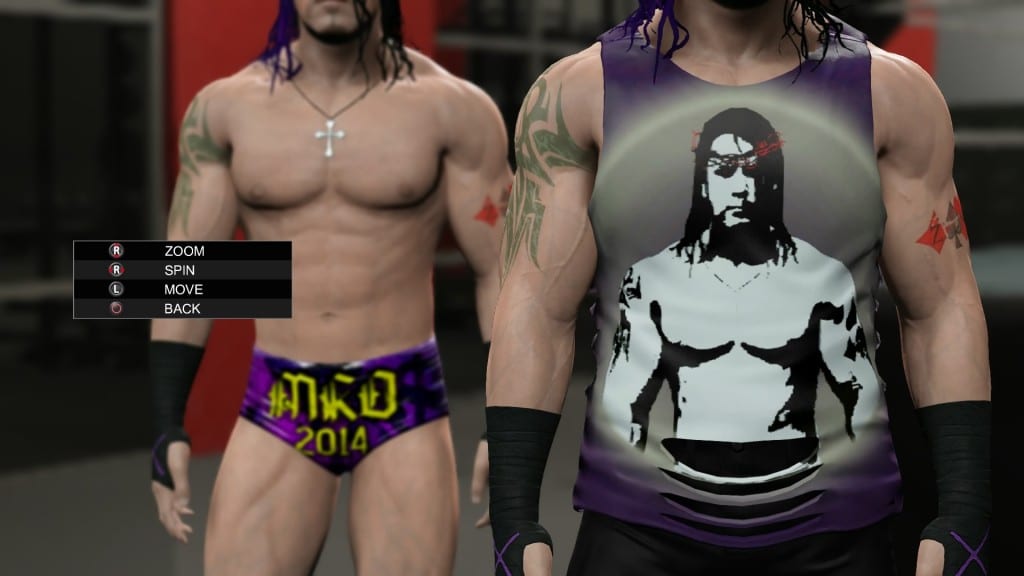 With the improvements in the graphical department, things have changed quite a bit. Face modelling isn’t as in depth, you only have 18 choices of hair, no 3D beards and such. This is quite annoying, sure. I’m just surmising that with the improvements across the board, 2K had to cut a fair chunk of content to release it on time. This is evident with the inclusion of eye make-up and lipstick, despite the inability to create a diva. I’m hoping that next year, a lot more things will be included to return its status as one of the best creation suites out there.

Having played parts of MyCareer before, I thought I knew what I was in for. Thrown into the Performance Center for a tryout, I had a training bout with Azrael as part of the Career Invasion feature. Azrael was created by my friend Ciaran, so it was really cool to see him in my game until a cutscene cut in and he took a few liberties. Despite the fact that “only one contract” was being granted, it seems everyone in that training class became perennial foes (especially that pesky Azrael) over the course of what ended up being a 7 year career. Yes, I said 7. Not 15. More on this in a bit.

For the opening few hours, you get a series of matches without much flow to them. Within 10 matches I became NXT Champion. From there, I moved up to Superstars, Main Event and finally to Smackdown where the fun started… Or so I thought. I had a pop up that asked me to choose three pay-per-views that I would want to be a part of. Having rarely lost a match, I thought that was a bit weird. Even weirder still was that sometimes, I wouldn’t get anything for the PPV I chose. And that’s a huge issue. Rather than play week to week, if you’re not involved in a story, you have one match a month. Either a Tune-Up or a Dark match. It became a running joke whenever I saw a message from Vickie Guerrero telling me that they have nothing for me, and to choose a Dark or Tune-Up match. 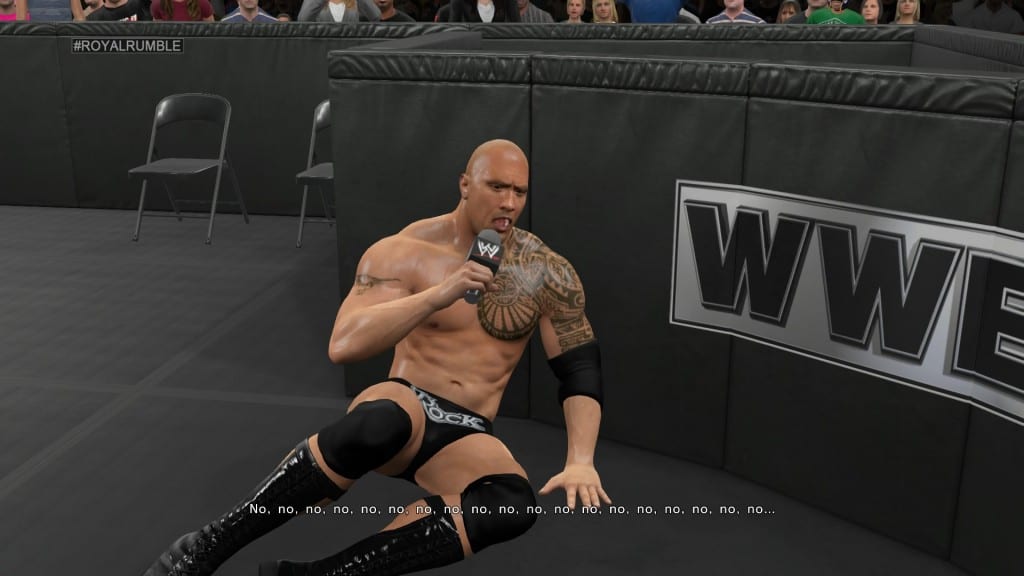 Win the World Heavyweight Championship? We have nothing for you. Beat Randy Orton? Nothing for you. Win a feud to be named “face of the WWE”? Nothing for you. Beat Brock? Beat John Cena? Nothing. For. You. It got absurd, to the point where I would grab a baseball bat and get myself intentionally disqualified rather than compete in what would soon become nothing matches. At this point, I had hired every manager, maxed out all my attributes, bought all skills and so on. So these matches meant nothing.

The stories themselves were… odd. The things I played at the press event weren’t exactly representative of what I ended up experiencing. See, aside from a few new MyCareer centric scenes everything was lifted from the Story Designer or Universe, but with Cole and King commentating over it. Not that it’s bad, but very underwhelming from the hype I had leaving that event.

On to the fact that my career lasted seven years. If you win the WWE Championship (That’s the gaudy looking belt introduced by Dwayne The Rock, as both the WWE Championship and the World Heavyweight Championship are represented as different entities.) it is a literal game over. You get to defend it once, and once only. As soon as you win, you’re told by Triple H how exciting the rest of your career was, how you’re on par with The Rock, Steve Austin and John Cena and then given a choice of who you want to face in your last match out of three opponents. I chose Azrael. As much as it’s very sentimental to choose your career rival, it ended up being the worst decision. 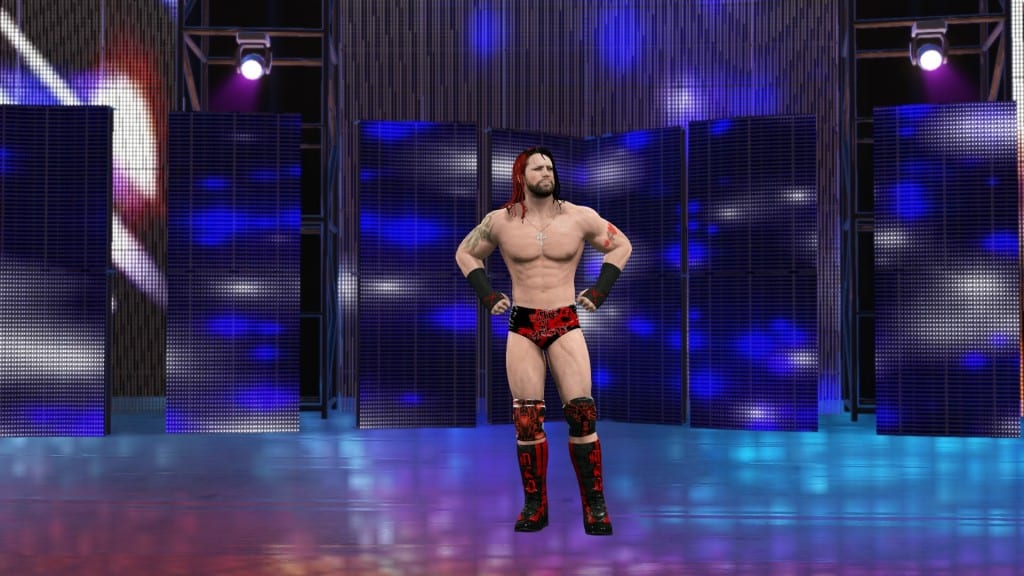 Your training group and Career Invasion rival never grow as wrestlers. As easy as they were during the first years of your career is how they’ll remain for the rest of the career. That’s entirely disappointing. I found this out during my first proper match with Azrael, where I thrashed him completely. He didn’t get one move in, and I left feeling very unfulfilled. It wasn’t like my match with Daniel Bryan where I squeaked out a win. It wasn’t like my matches with Chris Jericho where I couldn’t beat him. It was too easy. Almost like the AI was on vacation. The entire mode, while moderately enjoyable for a while just left a bad taste in my mouth when it ended.

I haven’t covered Universe or Showcase here as I have already gone in depth in my 360/PS3 review as they are exactly the same mode. Despite all the flaws, this is a solid first entry into the new generation of WWE gaming. It may not be to everyone’s taste however, but it is a foundation that 2K can build upon year on year to make it a better title. It’s not perfect, but it’s a lot better than the last few titles that have been released.  Here’s hoping that next year we’ll see the house take shape.