By Matt Denton
Video Game Previews
This page contains affiliate links. At no additional cost to you, we may earn a commission if you click through and make a purchase. Learn more

The road to WWE is a slow one, filled with many hardships. Most fans have become accustomed to this fact through programs like Tough Enough which revealed behind the scene elements of how to become a WWE superstar. For the first time, 2K Sports is bringing you behind that curtain and putting you through the training, the trials and tribulations of becoming a WWE Superstar through MyCareer mode exclusively on the PS4 and Xbox One versions of the game.

Since 2008, with the release of Smackdown Vs Raw 2009 created superstars had limited range. With the advent of WWE Universe mode, you could take your superstar through never ending years of their careers, but really it was never as fully featured as you would want a career mode to be. This year is going to be very different. You won’t begin as a fan in the crowd like you did during the 2010 Road to Wrestlemania, you won’t be forced to be Jacob Cass like in WWE ’12 and it won’t be a simple 3 month campaign to Wrestlemania. Excellent news!

After you lace up your boots for the first time, you have to report to the Performance Center and head instructor Bill DeMott. Yup. Hugh Morrus, Hugh G. Rection, Crash the Terminator, the Man Who Laughs, it doesn’t matter what name you remember him by, because by the end of training you’ll remember him screaming at you! Soon after Bill runs you through the gamut of training tutorials, it’s time to debut on NXT to face such up and comers as Adrian Neville, Sami Zayn, Corey Graves and Bo Dallas. 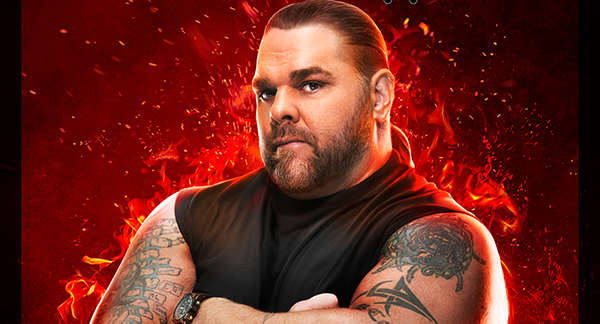 Further on down the line, when you’re integrated onto Monday Night Raw, one particular scenario sends former WWE World Heavyweight Champion Daniel Bryan down to the ring. Daniel gets in your face with his frenzy of “YES! YES! YES!” like he’s Meg Ryan in that film. You get an instant choice here, where you can either shake the man’s hand or punch him square in the bollocks. Since my character is classed under chaotic evil it doesn’t take much to figure out that Daniel Bryan got a big punch to his goat balls.

Over the course of the next few weeks, things escalated with Daniel Bryan and my character brawling on the entrance ramp. Security poured out to restrain the action, but it didn’t take long for my character to attack Daniel, and then Daniel to return the gesture with an attack of his own. This would all result in a massive pay-per-view showdown between my character and the Yes Movement’s puppeteer Daniel Bryan.

The final piece that I got to play was roughly six and a half years into my character’s career. I had just finished beating the tar out of Jey Uso when suddenly the familiar klaxon of doom rang throughout the arena, and there on the stage appeared Brock Lesnar with his advocate Paul Heyman bringing up the rear. Had there been a button to run, I would have used it. Soon enough, 6 foot 3, 286 pounds of “The Conqueror” was toe to toe with my superstar. It didn’t take long for Brock to enforce his will, drop me with an F-5 and have Heyman gloating on twitter about what had transpired. Given a choice of whether to challenge Brock, in the heat of the moment I chose to call out Brock for the following episode of Raw. I’m sure with his trademark turd eating grin, Heyman responded with a resounding no. The Beast Incarnate wouldn’t be fighting me on the next Raw, or any Raw for that matter. 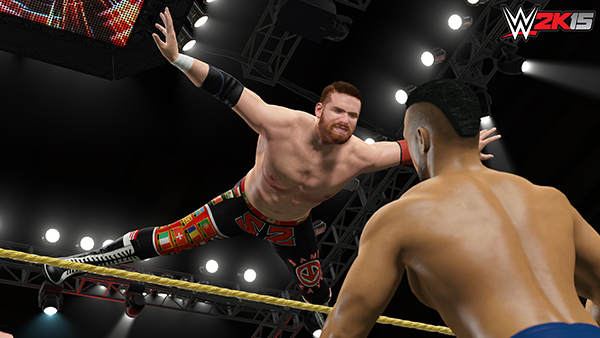 Brock had chewed me up and spat me out. However, I guess my character has the right mix of tenaciousness and outright stupidity to respond to this with a pipe to Brock Lesnar’s back. Paybacks are a you-know-what. Eventually, we got to a point where Vickie Guerrero was presiding over a contract signing for a match between my character and Paul Heyman who was signing for his client. Upon signing, Brock Lesnar appeared out of nowhere and drove my character through a table with another F-5. Sunnuva… Regardless, the match was on. No DQ, the great equalizer. I’ll let you imagine how that turned out…

Outside of storyline set pieces, here’s how MyCareer works, your main hub is where you can find out just how far along the face/heel spectrum you are. Your choices within matches and storylines determine whether you get booed or cheered by the masses. This isn’t limited to choosing to use Daniel Bryan’s scrotum as a speed bag. If you remove the turnbuckle pads for instance, it affects your rating. The fans are always watching. They also play a part in determining your placement, with a Twitter follower count being implemented so you can instantly tell how many fans are behind you in your quest to become a WWE Legend. 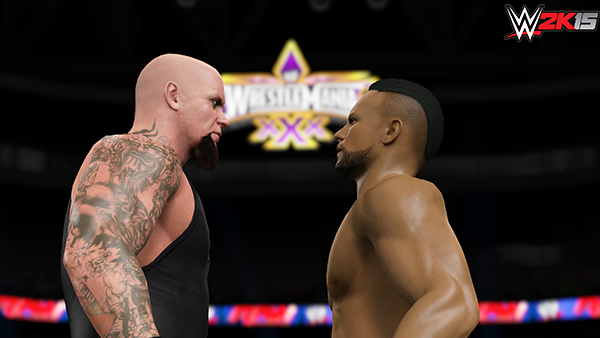 Also on your main hub are counts of your SP & VC. VC is your currency which you can spend to hire managers such as the One behind the One in Twenty-One and One, Paul Heyman or Zeb “Yosemite Sam” Colter. Also you can use that to buy exclusive skills like OMG moments, or even one on one time with superstars to learn their moves.

SP is used to upgrade your skills and make you faster, stronger and more resilient. You can’t just waltz in with a 100 overall character and blitz through the mode like it’s nothing. It provides a real challenge and reflects your growth within WWE. Plus you can use VC in conjunction with this to overcome plateaus within your improvement. If you can’t get beyond a certain level skill-wise, drop some VC to overcome your limits.

I should also note that at any time you can return to the WWE Performance Center for some sparring, or if you just miss the sound of Bill DeMott screaming at you. It’s probably the latter.

Having access to this game for around eight hours during our press testing day, I can tell you that while a great deal of animations look quite familiar, you can’t expect 2K (or any sports game developer) to get rid of perfectly good animations because they’ve been around for years. The game works a lot smoother than it has in previous years, what you’ll probably notice first is the fact that you have fewer moves in your arsenal this year. While I suspect that most will be annoyed by this, as a seasoned gamer I think this is a good move since with the previous year’s system, I rarely used around eight moves from two positions. What I would typically use the arm lock and head lock positions for were a crude re-imagining of chain wrestling. 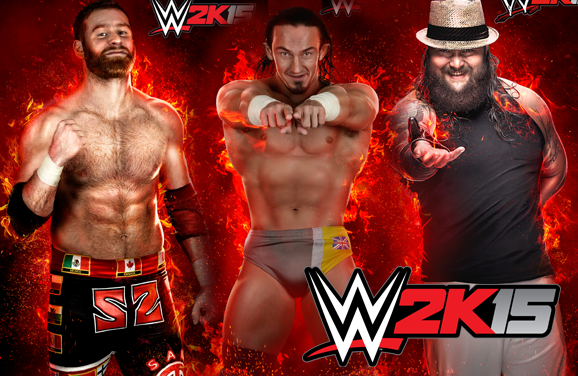 Chain wrestling happens to be a new feature that is initiated in the early moments of a match, where you lock up and then engage in a version of rock paper scissors to advance into an advantageous position and from there you have to find a sweet spot using the right stick to deliver damage. It delivers a much more realistic experience to proceedings, instead of going straight into suplexes and head drops like the game has delivered since day one.

The improved stamina system works really amazingly too, beginning with three levels, everything can take away from the stamina system. Countering, chain wrestling, running and attacks. You have to keep a check on this, because it’s more important than in previous years, since getting worn out at the wrong time can be game changing. For example, if you were to hit a running kick (such as my created wrestler’s Brogue Kick) and you run out of steam delivering the move, your superstar will fall over exhausted. From there, if you’re lucky, you can crawl over and drape a single arm over your opponent to try and get the win.

The final major difference in matches this year is the evolution of the wake-up taunt. When you have enough momentum to deliver a final blow, you can summon your opponent to his (or her) feet by holding down triangle (or Y) and then upon releasing the button you will spring forward with your finisher, which is really cool but with the trade-off that in this early build it is quite easy to counter.

One of the more pleasing parts of the MyCareer mode is that after your matches you’re evaluated on your ability to engage the audience. Previous years were all about wins and losses and while wins are nice, it’s all about giving the fans a great match. You could go on a Goldberg like run of 173 consecutive victories, but that probably isn’t going to excite the crowd since Goldberg was lightning in a bottle. An even, exciting match is what really counts here with close calls and back and forth action. You’re rated on a five star scale, with things taken into account like Oh My God moments, exciting near falls and the like. Think of the scoring system from Defeat the Streak and you have a very close approximation to this new addition.

Overall, my experience with WWE 2K15’s MyCareer mode was excellent. No longer do I have to go back to Smackdown 2 to play a never ending career mode that excites and engages. No longer do I have a limited amount of time to make my mark, whether it is a year or 4 months, and no longer do I have to rely on the Universe mode to scratch my itch of taking a new superstar to the top. 2K Sports have done extremely well for themselves in executing MyCareer in many other franchises, but now it has found a true home with WWE.