By Matt Denton
Video Game Reviews
This page contains affiliate links. At no additional cost to you, we may earn a commission if you click through and make a purchase. Learn more 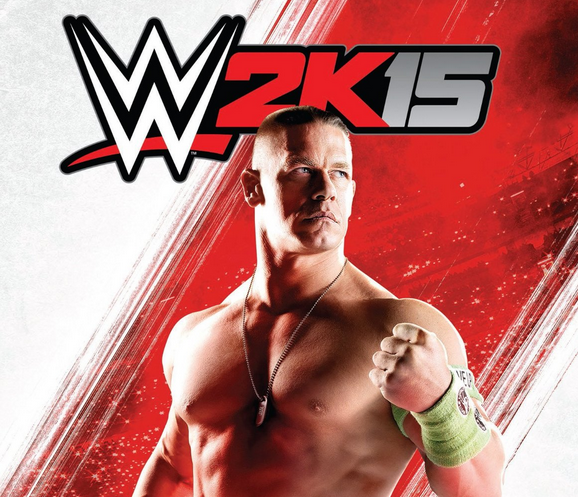 We’ve heard a lot about the next gen offerings of WWE 2K15, but literally zero about the last-gen, for very good reason. This is essentially a scaled back version of 2K14. I can totally understand why, because 2K were focused on bringing an improved product to the next generation.

When I say it’s a scaled back version of 2K14, I am referring to several missing modes such as the Create a Finisher mode, Story Designer and certain entrances are completely unavailable (even the pre-set entrances are gone.). I can surmise that CAF was removed because it was an ugly, clunky mess of a mode that was nerfed by THQ a mere year after introduction due to it being exploited by online gamers. Story Designer was nice and all, but there was a ton wrong with it. I can totally stand by 2K removing these features, there’s only so much you can do in a short development cycle especially when you’re also overhauling everything for the next generation debut.

I’d love to cover the graphics and controls, but they are really just the same as years gone by. I can give credit where its due, as the new additions to the roster like the Wyatt Family, Corey Graves and Curtis Axel look really good. However, there are still a few models that look out of place. I can tell you without hesitation that the next gen version of 2K15 is nothing like this, which may be a contributing factor to why I was so disappointed by this game. None of the game mechanic improvements are in this at all, meaning that a great deal of what you’ve seen is next gen only. The only things the two versions share are the roster and the animations. 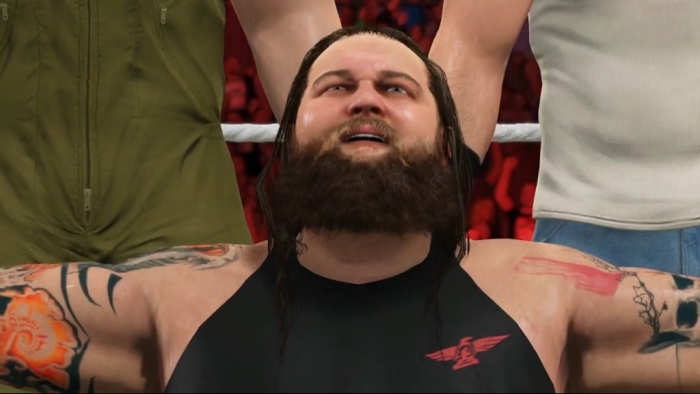 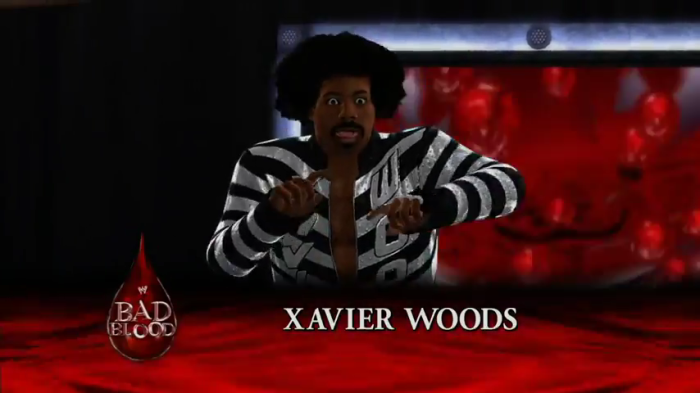 2K Showcase is a highlight of the game. While it’s quite similar to the 30 Years of Wrestlemania mode and the Attitude Era mode before that, these are centred on two of the most high profile feuds of the past fifteen years. The HHH Vs HBK rivalry from mid-2002 to mid-2004 and the John Cena Vs CM Punk feud which began at Money in the Bank 2011 and ended just before Wrestlemania 29. Once again these matches are objective based, but this time around it is done much more smoothly, without the need for over the top quick time events (although these are still present, they aren’t all over the shop). For example during one of the many Cena Vs Punk matches, one of the objectives was to perform the Attitude Adjustment, which mid move triggered a cutscene where CM Punk reversed and attempted the GTS, only for Cena to counter back into the Attitude Adjustment. It was smooth as silk, and really impressed me.

The mode doesn’t need to re-enact promos using the game engine, and the commentary is very much impressive for a mode like this. A good deal of it uses the actual commentary from the events (although, this is limited to the CM Punk Vs John Cena rivalry, as Michael Cole was nowhere near Raw at the time of HHH Vs HBK.) Talking of commentary, while a lot of it is quite familiar, there are a lot more recorded for the game this year and it breathes some new life into what is still largely a stale system. Also the crowds are much more lively this time around, which is a welcome addition. While on the subject of the crowd, going back to the 360/PS3 version from the PS4 version just shows me how weird the crowd is visually. In one match, I was able to pick out at least 12/13 of the same crowd model wearing the exact same shirt and doing the exact same animation. It’s honestly the first time I’ve paid attention to it and now I can’t stop looking when I get a chance to. It can be really distracting. 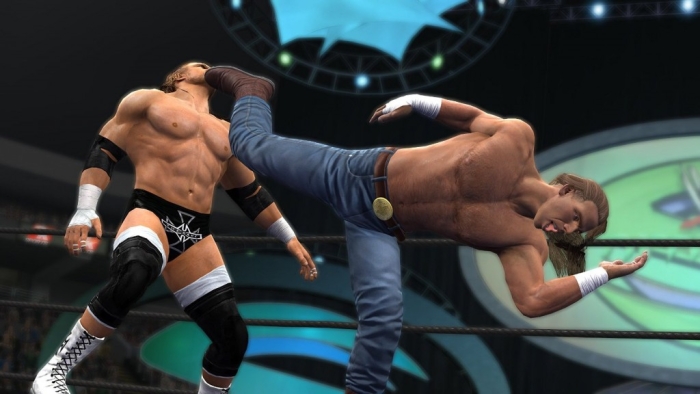 Back to 2K showcase, one of the best things about it is that it doesn’t really take you out of the swing of the matches by showing you what objectives you’ve completed and what you’ve unlocked straight after the match, prompting you to manually load the next match. The next match or video will automatically load keeping the mode smooth as possible. At any point you can hit Select or Back to get to the timeline menu where you can review what you’ve unlocked, or go back and re-do a match if you missed an objective.

Up next is the Who’s Got NXT mode which happens to be a mixed bag. You have to run through this mode if you want NXT grown stars like Rusev, Sami Zayn or Adrian Neville for play. There’s no actual difficulty setting like there is for 2K Showcase, with difficulty fluctuating wildly from match to match. For example in Sami Zayn’s story, my first match was against Cesaro. I was able to beat him with ease in about a minute forty. Later on, in the rematch against Cesaro things got a great deal tougher out of the blue. I had to earn 3 finishers to hit Cesaro with the torpedo DDT (A new OMG move, and it’s 3 finishers because the Helluva Kick is a corner finish) which took me a fair few tries to accomplish successfully, simply because it was a typical Legend difficulty reversal-fest. Another tough objective was in the Neville Vs Bo Dallas ladder match, to not let Bo even touch the title. Very frustrating indeed. 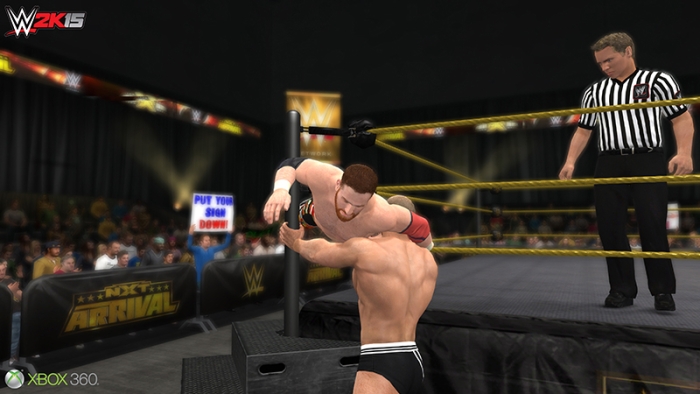 Your reward for running through the mode isn’t just the five NXT superstars, but a Proving Ground match against the measuring stick himself, John Cena. For those expecting something along the lines of Defeat the Streak, you’re going to be disappointed. I beat him without much trouble using Sami Zayn in just over 4 minutes. No shenanigans. Johns only defence was his comeback ability, which was easily countered anyway. I was expecting a few tricks such as Cena countering ground grapples into the STF, like Undertaker would counter into the Hell’s Gate gogoplata. As it stands, John is just overpowered in this mode and that’s really it.

Finally, we come to the Universe mode. I’ve had a love/hate relationship with this mode for quite a while. This year brings one major improvement. Rivalries can now be assigned vague storylines, of which there are over 800 of. There are some superstar specific ones too, which is really cool. However some of the time they don’t work out as well as they appear to. One of them was an Undertaker Vs Daniel Bryan feud which on paper included the Shield as guest stars. Nowhere in the story did the Shield show up, making it rather confusing. Outside of that, there isn’t really any change to this mode. 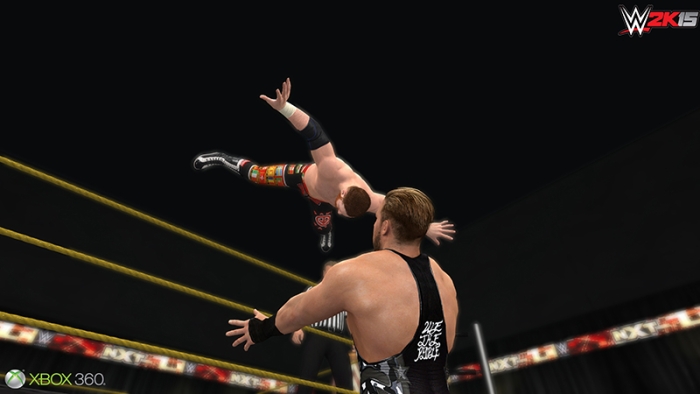 Overall, while I like 2K15 it’s hard not to feel like this is simply an appetizer for the full course that drops on November 18th. I don’t mind the removal of the Create a Finisher or Story Designer, but overall the game feels exactly like it has for the past few years except over the past few years we’ve had improvements in gameplay that just aren’t present here. That coupled with the usual legacy glitches (and a few new ones to boot) make me hopeful that the full version on the PS4/XB1 will blow this one out of the water as it seems to be the definitive version. If you have 2K14, I suggest skipping town on this and waiting for the next gen version.