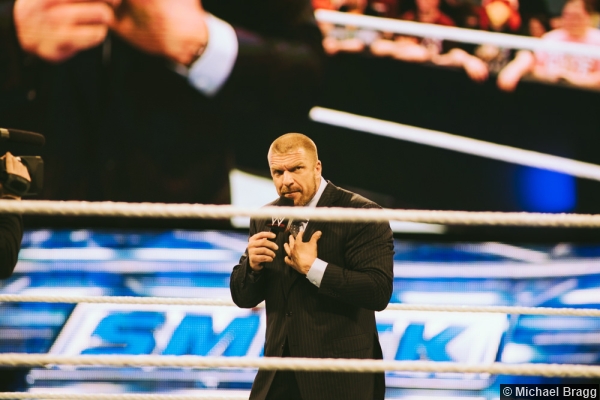 Two nights before the most important Survivor Series in several years, the 796th edition of WWE Friday Night SmackDown came to you from the Thompson-Boling Arena at the University of Tennessee in Knoxville, TN. On what could very well be his last SmackDown in charge of WWE, along with his wife Stephanie McMahon, WWE COO Triple H would kick off SmackDown in a special in-ring interview with Michael Cole to discuss the importance of this Sunday’s Survivor Series where, if Team Authority loses to Team Cena in the Traditional 5-on-5 Survivor Series Elimination Tag Match, then Triple H & Stephanie will be removed from power in WWE. After the events of RAW saw Team Cena come to completion with the addition of Erick Rowan and Ryback, what will Triple H have to say regarding these new developments?

With the landscape of WWE set to undoubtedly change at Survivor Series this Sunday, two members of Team Cena would collide with two members of Team Authority as “The World’s Largest Athlete” Big Show would join “The Big Guy” Ryback to represent Team Cena against the captain of Team Authority, “Mr. Money-in-the-Bank” Seth Rollins, and The Authority’s Director of Operations Kane! Also, after a four-on-one beatdown before the match led to Team Cena member Dolph Ziggler losing the Intercontinental Title to Team Authority member Luke Harper, “The Show-Off” would be in action on SmackDown, facing Team Authority member and United States Champion Rusev in a non-title match.

Before he faces “The Eater of Worlds” Bray Wyatt at Survivor Series, Dean Ambrose would appear on SmackDown as “The Lunatic Fringe” would present what he is calling his “survival kit” to survive Bray Wyatt this Sunday. What will the always unpredictable Dean Ambrose have up his sleeve? Will we see an appearance from Ambrose’s opponent Bray Wyatt?

Also on SmackDown, with a Fatal 4-Way Tag Match for the WWE Tag Team Titles coming up at Survivor Series, two of the four teams in the title match would be in action as Los Matadores would collide with the self-proclaimed “A-Lister” The Miz and his popular stunt double Damien Mizdow.