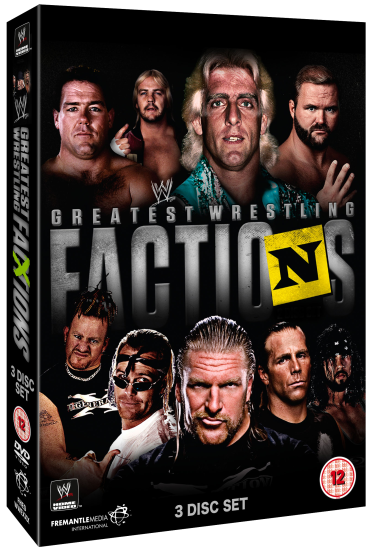 With things hotting up in WWE between The Shield and Evolution (with The Wyatt Family in the mix too), it seems that now is as good a time as any for WWE to take a look back at the greatest factions in wrestling history.

Of course, as with most of WWE’s releases, you have to accept that non-US promotion groups are going to be overlooked, as well as some of the more indy-flavoured gangs from the likes of Ring of Honor and Chikara, even if you feel they have a place on this list ahead of some of the groups who did feature.

This means that there will be no place for -:

Also, as there will definitely be no TNA factions, you can also exclude -:

With all that being said, it was a surprise to see the following factions overlooked when you consider that The Oddities (!!!!) made it on the list -:

Now that you’ve had a chance to see who is not on the list and will be going into both this review and your first viewing of the collection, you can overcome any disappointment you may have and enjoy this run through of 20 of the most famous groups in the history of pro-wrestling (that WWE own the video library for).

Taking the format of “introduce the group via a series of talking heads and then show a match featuring said group in action”, this will be familiar territory to veterans of WWE’s take on “Best of” sets.

Some of the talking heads are clearly from previous releases and in some hilarious continuity moments, people not only change their clothes, but their hairstyles and facial hair. Case in point, Daniel Bryan is talking about one group with short hair and a hint of a beard, while later on he’s gone full reta… goat-face.

CM Punk’s contribution to the Straight Edge Society chapter is lifted wholesale from his own biography release, but it’s good to see guys like Fandango, Justin Gabriel, Big E., Curt Hawkins and Hornswoggle earn some royalties and getting some face time on an international release.

The older matches suffer from the technical limitations of their time, so appear in a 4:3 ratio with ugly borders down the left and right side of the screen. While this can’t be helped, it is a bit irksome to go from full screen with the into part and then back to an obsolete aspect for the match itself. This is redeemed however by having the original commentary on pretty much all of the footage on show, even if some of the entrance themes have been (badly) overdubbed with Generic Public Domain Theme #12.

The set is 9hrs long, but the great thing about a countdown like this is that the time whizzes by. Plus, you can take a break and come back the following day without losing the momentum you get from watching a film or PPV. I mean, you watch half a movie and come back the next day, you lose the zone you found yourself in. With these types of releases, you can just come back in at the next chapter because the previous story has now been told.

The match content is pretty good across the board as well, which makes a welcome change and there will be something for everyone (even that one Dungeon of Doom fan) to sink their teeth into.

At the top of the review, I made mention of some factions that have been overlooked and the inclusion of The Oddities makes that a harder pill to swallow than it normally could have been.

Of course, this is essentially a list-based release and with any list you are going to find entries you feel don’t belong at the expense of those you feel have more of a right to be there. My own personal internet-rage is over the fact Raven’s Flock didn’t make the cut as, for me, this was a group with a great dynamic and a great run in both ECW and WCW. For them to miss out in favour of [EXPLETIVE DELETED] Kurrgan was almost enough for me to contact the good people at Fetch Publicity and ask if there was a disc missing.

Fortunately for me, I could console myself with -:

– Bobby Heenan in his prime

– Andre the Giant in a mask (sssshhhhh… it’s a secret)

– Remembering how much heat Right to Censor genuinely had

–  The Brood’s still-great-to-this-day entrance and theme

– An appearance by The J.O.B. Squad

– The cheesiness of the Dungeon of Doom vignettes (seriously, if you haven’t seen them before, you will piss yourself laughing)

– CM Punk shaving the heads of his followers and his “One Nation, Under Punk” comment

– The Four Horsemen stylin’ and profilin’ like only they could

As for the matches, the bouts featuring Right to Censor, The Million $ Corporation, The Fabulous Freebirds, Nexus, The Brood, The Hart Foundation, The Nation of Domination and The Triple Threat (where Bam Bam nails the best version of Greetings From Asbury Park you will ever see) and The Four Horsemen are all excellent in their own way and for different reasons.

The other matches are watchable in their own right and this is a set that is well worth seeking out, especially if you get it from WWE DVD (in the UK) at the cheaper rate.