DeGeneration X – a name that has been synonymous with pro-wrestling since 1997, first and foremost as THE faction of the Attitude Era and then later as the super-tag-team of Triple H and Shawn Michaels. Past members included Rick Rude, Chyna, The New Age Outlaws , Tori and X-Pac and it’s not a stretch to say they were, at one point in time, the most over act in the entire business.

As with all good things, DX came to an end. The first incarnation was brought to a halt within the space of a few months. The Montreal Screwjob, which should need no explaining, caused Rick Rude to leave the company in November of 1997 and, four months later, a serious back injury forced Shawn Michaels to retire for good (or so we thought). From there, X-Pac returned from WCW the following night and, along with Billy Gunn and Road Dogg, the most prevalent incarnation of Degeneration X was created.

Shawn Michaels would then return to action in the Summer of 2002, dumbfounding everyone by how well he performed and, just like that, a one-match farewell became an eight-year extension to his career and, in the process, yielded possibly the best matches he had ever been a part of.

Four years after that and, after months and months of teasing, the two founding members of the faction were wearing the green and black once again. After WrestleMania XXV, HBK took a hiatus, but Triple H coaxed him back in the Summer of 2009… and DX made it clear they were making ONE! LAST! STAND! 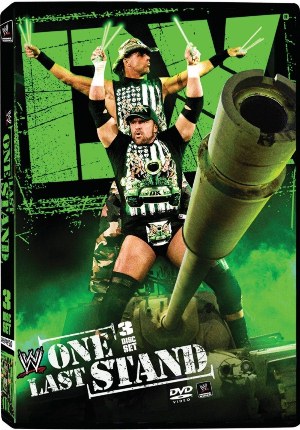 With this covering the period of August 2009 to March 2010, everything contained on all three discs is ridiculously fresh in the minds of most wrestling fans. It also means that as it covers a ridiculously short time window, there’s really no reason to purchase this set at all.

Some of the comedy is funny (such as the knowingly camp product placements), but too much of it is forced and the work they did with Hornswoggle is just pathetic from beginning to end. The matches, however, are another story, with some great bouts opposite JeriShow and Legacy (although, unsurprisingly, the defeat to Legacy at Bragging Rights has been omitted, as has the frankly awesome DX v Miz/Morrison match) on offer.

Apart from that, Shawn’s farewell speech will always be worth watching again, but the rest of the collection just doesn’t do it for me and this entire set comes across as milking the cash cow in the worst possible way.

A single extra, but it’s an interesting four-minute look behind the scenes as we see DX rehearse and hang out with the boys backstage. It’s genuinely the best non-match chapter in the entire set.

When WWE release a complete history of DX, from August 1997 until March 2010, we’ll have a 10/10 collection that EVERYONE must own, Until that point, we need to put up with crap like this. I mean, the matches are good and all, there are some funny segments and the real-life friendship between Triple H and HBK is plain to see, but a three-disc set for a period of around eight months is an insult, especially when Big Show’s entire career is reduced to a single 50min documentary.

I can’t recommend this unless you get it for free or absolutely need to own every single WWE release. Keep your money for something, anything else and wait, like me, for the DeGeneration X Anthology that will, I hope, eventually see the light of day.