In sports entertainment, “rivalry” takes on innumerable forms, but only 25 can be considered the greatest in history. For the first time ever, WWE PRESENTS: THE TOP 25 RIVALRIES IN WRESTLING HISTORY. From grudges spawned out of championship pursuits to personal vendettas that transcended the boundaries of the ring, all the timeless conflicts are presented here. Each RIVALRY is narrated by a different sports-entertainment personality, featuring showdowns from WWE, NWA, WCW, ECW, AWA and WCCW!“ 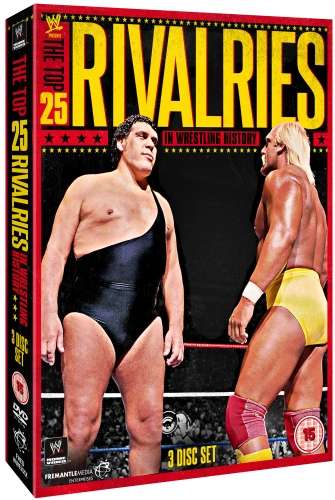 Before we get to the actual review of the DVD, it’s worth noting that this is a list and like any list, especially in pro-wrestling circles, the content is going to be purely subjective to your own memories and personal tastes. With that in mind, you are going to find entries on here that would not make your own Top 100 list and there are going to be rivalries missing (for me, Raven v Sandman could easily have been included, while Triple H v Orton should have been replaced by Triple H v Batista).

Also, the title of the DVD should technically be The Top 25 Rivalries in Wrestling History that WWE Own the Footage Of, as there is nothing from Japan, Mexico, Puerto Rico or the UK to name a few.

That being said, there is a case to argue for each on the list and the main presentation is well put together. Renee Young is a decent host and each segment being “narrated” by a single individual is an improvement over multiple talking heads repeating the same thing.

The second and third disc are comprised of complete matches featuring most of the feuds that made the list.

All of them are good-to-great, but the top three for me are -:

As mentioned, with all list-based releases, everyone is going to have something they feel deserves a spot be left out and something they felt sucked be on the list. It’s the nature of “the list” and there’s no point in dwelling on what should or shouldn’t be there; instead, just focus on what is there and take from it whatever enjoyment you can.

The countdown is well presented and Renee Young is a better host for the links that Matt Striker is, not to mention she is much more aesthetically pleasing to boot.

While you will think that a great feud has been left out, it’s obviously been done is such a fashion so as not to feature someone too many times. Sure, HHH, Rock and Undertaker are mentioned more than once, but you can’t argue that each rivalry they featured in on this set deserves a place.

The single talking head per segment is also a great idea, especially as it allows a great deal more explanation for each rivalry to be told. That being said, I was VERY surprised to see Shane Douglas used and that he was very healthy looking, but even more surprised to have VINCE RUSSO as the talking head for the #1 spot.

Personally, I would have preferred a Top 10 list and allowed more detail for those rivalries to be explained via promos, angles and a look at the series of matches the feud involved. Another gripe is that the second and third discs really should have had a match from each of the mentioned rivalries as having 25 rivalries, but only 13 matches seems like short-changing the viewer.

The complete lack of anything resembling a true WCW rivalry is another issue I have with the set.

That being said, WWE do deserve a lot of credit for the matches they have chosen. Rather than going for the most obvious match in the feud or even the best match in the feud, the company has tried to give us matches not featured on DVD releases previously.

Due to this, instead of WrestleMania I’s main event, you get the rarely-seen singles match that led to it. Rather than recycle the infamous 1998 Hell in the Cell, we get their first match between Undertaker and Mankind from King of the Ring 1996.

The list continues like this as we get Hogan and Savage teaming rather than fighting in the fantastically fun main-event of SummerSlam 1988, Rock v Austin from a UK-only PPV and Kurt v Brock from SummerSlam 2003 instead of their famous WrestleMania XIX match of the heralded SmackDown Iron Man Match.

For the Tully v Magnum match alone, this is worth getting, but it’s a nice look at the history of the business and the heated rivalries that captured the imagination.

Jim Ross puts it perfectly during his explanation why the first Undertaker v Kane match was such an anticipated contest. Simply put, it was given time to develop and wasn’t decided then executed in the same week. The same can be said for the rest of the list and it was almost as if JR was pleading with the current writers to heed his words.