Bret Hart is back in the warm bosom of WWE and, since everything is hunky-dory, we get ourselves a new three-disc look at not only “The Hitman,” but also the entire Hart Family. This is both the DVDs biggest strength and greatest weakness. It’s a strength because there’s going to be a wealth of information on those members not called Bret or Owen, but a weakness because, quite frankly (and not to be disrespectful), very few are going to be interested in the those members not called Bret or Owen. 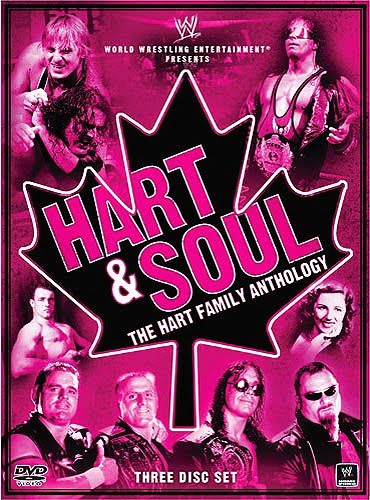 The Hart family has long served as Canada’s first family of Sports Entertainment, from patriarch Stu and his Stampede Wrestling and Dungeon, a training site that has produced multiple Hall of Famers, though sons Bret, Owen, on to a new generation of WWE Superstars, The Hart Dynasty. But the family’s journey was never a smooth one, as their accomplishments were often punctuated with devastating tragedies and loss. Now for the first time ever, fans can learn the entire story in Hart & Soul: The Hart Family Anthology. A brand new documentary chronicling more than 5 decades of family lineage that is filled with never-before-seen Hart family interviews and supplemented with a dozen matches featuring Bret, Owen, Keith, Bruce, The British Bulldog, The Dynamite Kid, Jim “The Anvil” Neidhart, The Hart Dynasty, and more!

With a running time of 90mins for the main documentary, few things get the time they deserve, most notably Stu Hart himself. The doc opens with a look at the patriarch and his foray into amateur wrestling back in the early days. From there, we whip through various talking heads (Jim Neidhart is fantastic here) discussing a number of topics that include the Dungeon, the sisters all marrying wrestlers even though they were forbidden from even dating wrestlers by their parents, Stampede Wrestling (and, surprisingly, the way Vince bought the promotion and then basically reneged on the deal) and the various tragedies that have befallen the family over the years.

Major turning points in their lives, such as Montreal(TM) or Owen dying aren’t really given the depth that you would expect (probably a blessing in regards to the former), but, to be fair, they don’t sugar-coat the Owen accident one bit. The one tragedy that got me and really choked me up, however, was the passing of 13yr old Mathew Hart Annis (Teddy Hart’s brother) in 1996. It’s heartbreaking to listen to the family recall the two-week period from when he fell ill to when he died in a hospital bed.

The last half-hour of the main feature is one of the most depressing 30mins you’ll spend watching a wrestling DVD as it covers the deaths of Owen, Davey Boy, Helen and Stu in succession. It’s a shame to see how much these kids miss their family and shows how close that most of them were. To close, however, we do have a happy ending as the Hart Family torch is picked up by the third-generation kids and The Hart Dynasty lead the charge into 2010.

It’s on the second and third discs that this set picks up some much needed steam. The links from THD aside (they’re horrible), the matches are a stunning collection of bouts that most people won’t have on their shelf. The first one, a six-man from Stampede, suffers from production issues, but the in-ring stuff is great for the era. The rest of the matches all fall under the WWE banner, but benefit from most of them happening from 1986-1997 (only The Hart Dynasty v DX is from the modern era), meaning they won’t be fresh in our minds and we can appreciate them more. Each one is a stand-out in its own right, but my top three over the two discs are Bulldogs v Harts, Bret & Owen v The Steiners (a rarely-seen gem between two legitimate brother teams) and Owen v Bulldog for the WWE European Championship.

Underneath them, the blistering 10-Man from Canadian Stampede still excites and remains, to this day, one of the most intense crowd atmospheres I’ve ever witnessed at a wrestling PPV and the Bret/Owen Cage Match is, for me, in the top three “blue bar” cage matches in WWE history. Only the Survivor Series match is a bit of a stinker and even that led to the fantastic Bret v Owen feud, so can be forgiven for being such an underwhelming encounter (Jerry Lawler, who was originally supposed to lead the knights – hence why they were knights in the first place – until a seedy situation arose, had been saying how awesome these guys were going to be… and they were, to a man, horrible).

The last match is from the close of last year, so a lot of us will remember it pretty well, but it’s still a really great outing for the younger Harts and they run DX pretty close, with HBK and HHH doing a good job of putting THD over. I would have preferred a win for the new Harts, but this was the best match they’d had up to that point, so it makes sense putting it in.

Mostly short little segments that come across more as deleted scenes from the documentary rather than actual extras. Chris Jericho talking about his flight with Owen is a cool couple of minutes and both the Owen Hart – Prankster and Uninvited Guest extras raise a smile or two.

A documentary that focuses on names very few people will actually have heard of and even less will care about, the man portion of Hart & Soul is good, but not essential viewing across the entire running time. Heartbreaking stories abound as the Harts have had their fair share of tragedy, but you also get a sense of how much fun it was at times in the big red house these guys called home.

The talking heads are all relevant to the piece and, surprisingly, it’s Jim Neidhart who is a joy to watch whenever he gets to speak to us about marrying in to the family. Everybody gets a fair amount of screen time and you get the sense that nothing is being said to appease anyone and everything you are told is a true account of what happened.

Some minus points are the fact Stu Hart’s legendary mean streak and the way he would actually take liberties with students in the Dungeon isn’t mentioned at all and the focus on the minor family members will have a lot of viewers reaching for the skip-forward button.

The matches are, for the most part, the reason to own this three-disc set. Most of them haven’t been released on DVD (at least in their entirety) and as a fan, you really should have them in your collection.

Not the unmissable viewing it could have been (although, if you want more Bret, you should really buy his own three-disc DVD release), but the matches more than make up for it. Oh, and as a final point; for those wondering how “The Anvil” and his wife (who is a lovely lady, but has the voice of a broken foghorn and a face to match) could produce a great looking Diva like Natalia, wait until you get a look at her sister Kristen; she is absolutely stunning.