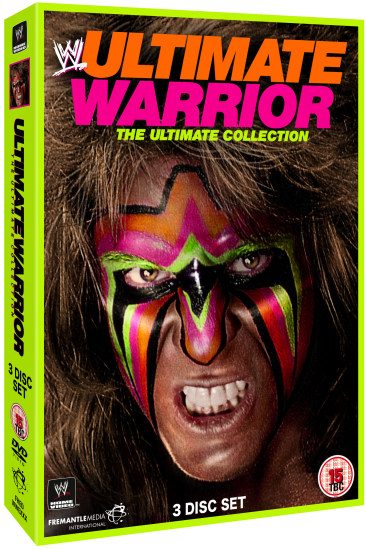 I had originally written this review prior to the 2014 Hall of Fame Ceremony and felt that reading it on Wrestling 101 would be a good way to have you journey through Ultimate Warrior’s career so far and show why he deserves his place among the Legends of WWE.

Due to this, I felt that while I had watched the collection and reviewed it while he was still alive, most people will end up viewing it after his untimely death and of course this will change the way you appreciate the content, react to the great moments and feel inside as Warrior sits down and discusses the various events in his wrestling career.

With that in mind, I rewatched the entire set again and this review reflects the impact and legacy of The Ultimate Warrior Ultimate Collection in a world now without the star of the piece.

As sad as the passing of Warrior is, I’m glad that it happened after peace had been made between him and WWE (as well as apparently everyone else where there had been issues). No-one deserved the butchering he received when WWE released The Self-Destruction of the Ultimate Warrior and if he had died with that being the last word on his career, then a great injustice would remain unresolved.

Warrior actually opens the first disc by discussing that very DVD and it’s a credit to WWE that they admit they were wrong to release it. In fact, the talking-head segments with Warrior are various combinations of funny, poignant, classy, honourable and from a man who clearly understands where the character ends and the man begins.

Respectful to virtually everyone he has ever worked with, Warrior is candid with his comments (although not as “controversial” as some were expecting / hoping) and makes a lot of valid points during the over-8hr running time.

Surrounding these sections are various matches, promos and angles from his days starting out as Sting’s tag-partner (before either were known by their current monikers) through the Von Erich-run WCCW and into his stellar run in WWE… before giving his very brief run in WCW the afterthought footnote it deserves.

A lot of people said Ultimate Warrior couldn’t work and his promos made no sense, but this collection blasts that myth to smithereens. His squash matches were brutal and the longer bouts on the card are really well worked wrestling matches. I mean, he was never a headlock-takedown-into-a-headscissors type of wrestler and that’s fine. The gimmick he played was a human bulldozer who just ran through whoever was put in his way.

This in turn meant that when he was put into a match where he didn’t just run through his opponent, it made his foe come across as something special and the matches themselves were great. His bouts with Rick Rude, Hulk Hogan and Randy Savage are epic, with the WrestleMania VII “Career v Career” match being my favourite wrestling match of all time.

It was my favourite when I first saw it as a 14yr-old boy in June 1991 and it’s my favourite wrestling match today as a 37yr-old father of four. It is genuinely the prime example of wrestling excellence and both Warrior and Savage (along with Sherri, Elizabeth as well as Heenan and Monsoon on commentary) giving the performances of their respective careers.

From the little nuance of Ultimate Warrior not running to the ring and Heenan making a huge deal of it, to the apparel of Warrior, the twitchyness of Savage, the distraction of Elizabeth in the crowd and the genuine feeling that one of these guys will never wrestler again, it had everything. The drama, the near falls, the five elbows, the walking away and the powerful image of the final pinfall… I could go on forever about why this match should be considered the perfect wrestling match, but this would take away from the rest of the collection.

All in all, this is epic on a scale worthy of The Ultimate Warrior.

Taking on extra emotional depth, this collection (from the words of Warrior himself) was meant to be the first part of an anthology committing his legacy to film for everyone to enjoy, but the sadness of his passing gives it an extra edge knowing that he can never see it fulfilled.

Reliving his most revered moments, greatest matches and, for me, the best match in history is worth the asking price and then some.

The collection has title wins, brutal squashes, hard fought victories and the final word on a great career as told by the man himself. It’s a fitting epitaph for a man who had made peace with the world before leaving it for a better place.

Please buy this, if for no other reason that to show WWE that we want to see the rest of what was in the pipeline.