The Self Destruction Of The Ultimate Warrior DVD Review

For the generation that grew up on late 80s to early 90s WWF, the name Ultimate Warrior brings a number of words to your mind: energy, fury, power, crazy, demented… wait, how did a man so big become a man so despised by his peers? This is the Self-Destruction of The Ultimate Warrior and boy, it is one hell of a DVD. 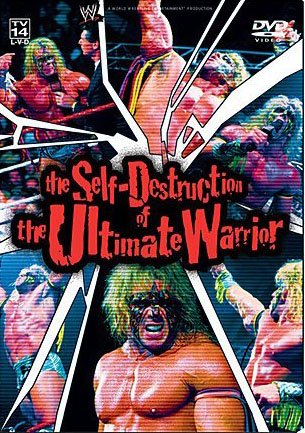 Although there are a number of positive memories and cases of “credit where it’s due”, let’s make no mistake about it: this DVD is a complete character assassination of the former Jim Hellwig, now simply Mr. Warrior. Every little thing that could be thrown at Warrior is done so right here as the main documentary chronicles the career stemming from his days as The Dingo Warrior after being discovered by Rick Bassman, right onto his WWF and WCW days through the 90s. Numerous young up and coming stars such as Edge, Christian and Steve Lombardi reminisce over how crazy the character was, both in promos and in his running to the ring, a trademark feature of all Warrior matches back then. Sounds good in theory, but it becomes rather petty as it progresses.

As big of a non-Warrior fan as I am (I wasn’t into the whole Warrior/Hogan fad, I was firmly a Bret Hart and Undertaker fan), dedicating a whole section on his music is just crazy. Surely Hulk Hogan would never have been as big as he was with “Real American”, right? We’ll never know, but I’d hedge a bet that it would make little difference as long as the song was good. Moving away from such wackiness, the DVD steers us deeper into insanity as it is seemingly deemed appropriate to rip into the Ultimate One for being announced from Parts Unknown (a place that MANY wrestlers were announced from, under the advice of the promoters themselves). Furthermore, several decide to make fun of his name change (for those who don’t know, the Mr. Warrior comment I made earlier was not a joke – he really did legally change his name) because no one has ever legally changed their name before.

Underneath the fat dollop of codswallop though is a story that at times can be quite engrossing. As full of rubbish as Hulk Hogan is, his comments on the Summerslam 1991 incident are definitely worth listening to, as is the section concerning Warriors 1996 return (watch out for the bull**** measure to go into overdrive as Triple H speaks) and the subsequent Halloween Havoc fiasco in WCW as Hollywood Hogan brings The Warrior in to avenge his loss (something not mentioned here, incidentally. Funny how that works). There is enough here to keep everyone interested as the people who worked alongside him share their stories, most of which aren’t favourable to our hero.

Still, all things considered, it ends on a high note as the conclusion is drawn: the man is insane, but he was a huge star with a huge legacy. Not that it matters afterwards though, because by that point you no longer can see the man as anything other than a nut job. If you’re a Warrior fan, you might not like this one at all. In saying that, the DVD extras are good, and feature the Warrior/Hogan classic from Wrestlemania 6 as consolation. So it isn’t all bad news.

On the whole, it’s a very good DVD. Don’t be fooled – the content is enthralling. The problem lies in just how biased the whole thing is. Maybe it’s the leaving for WCW that did it, or the lawsuit that Warrior defeated the McMahons in, or maybe just that Vince McMahon is a scorned lover wanting to vent his frustrations publicly. I cannot accurately answer the question of why, but it’s well worth seeing how. A must-buy.