The first thing you’ll notice about this collection is that there is nothing, absolutely nothing whatsoever, from Savage’s career before he came to WWE on a full-time basis. It’s an unusual step considering that almost all of the other profile DVDs featured pre-WWE footage (Austin, HBK, Flair, Triple H, Guerrero and Rey Mysterio all featured their early days), so why this collection isn’t the same is a mystery. 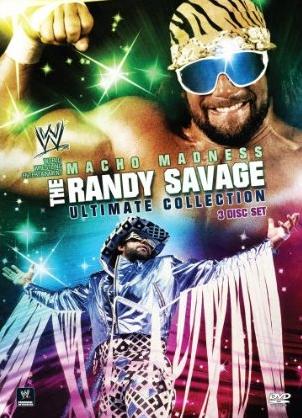 If you can get past that little faux pas, you won’t be disappointed with the quality of action on show, especially from the late-80s/early-90s. Matt Striker, who did a great Macho Man impression on the indy scene (long before Jay Lethal thought of doing the same), is alright in his job as linking the segments, but Maria flat-out sucks. If she wasn’t so pretty to look at (and damn, she is stunning to look at), you’d skip the links at every opportunity.

Starting from Randy’s WWE debut (a surprisingly heated and even contest against Rick McGraw), the collection hits a high gear almost from the off. The surprising revelation that Savage had decided to forego the main managerial talent in the company for the unknown Miss Elizabeth must have been an awesome swerve at the time and you can trace the lineage of the WWE Divas to that exact moment.

Ricky Steamboat was Macho’s first main rival and their first match on the collection is a really good effort. You can see that these two guys really loved to work together and this bout is a nice appetiser for their WrestleMania III match later on in the set. Other highlights from the first disc include rarely-seen matches against Hulk Hogan (with an unbelievable atmosphere), Bruno Sammartino, Tito Santana and Ted DiBiase (inside a cage where, near the end, a fan actually climbs up the cage to attack Virgil). It’s only fitting that the first disc ends with the Macho Man as top dog; the WWE Champion.

The second disc begins as the Mega Powers join forces to take on the aptly named Mega Bucks duo of Andre the Giant and Ted DiBiase in a continuation of the angle that ended WrestleMania VII. The finish of this match, where Elizabeth removes her skirt, was something else. It’s hard to imagine now, with Divas wearing next to nothing all the time, what a shocking move it was for the demure valet to show off her pins like that, with the most amazing part of all being that she still looks classy while doing it. We jump from there to the Mega Powers exploding in the run up to WrestleMania V, where, one year after he helped him win the title, Hulk Hogan tries to take the gold away from Macho. In the same building that Savage won the title, he would go on to lose the belt to his nemesis in a stunning bout. Their rematch from The Main Event isn’t as good, but does have the added wrinkle of Savage evolving from a man to a king and adding Sherri to his entourage, not to mention the celebrity addition of James “Buster” Douglas, who had upset Mike Tyson prior to the event.

From a brilliantly built angle with a great pay-off, the action leaps forward another twelve months to WrestleMania VI and the one match that boggles belief as to why it’s on the collection; Sherri & Savage v Dusty Rhodes & Sapphire (who, for some reason, don’t come out to Dusty’s theme). Not including pre-WWE content is one thing, but to omit that (and various other WWE and WCW segments/matches), yet include a mid-card comedy match is ridiculous. It goes without saying that this is the worst chapter on the collection by a mile. I will say this though, Queen Sherri looks beautiful during the entrances; she may have been many things, but all-woman is the main one.

From the worst bout of the set (so far) to the best match and, in my opinion, not only Warrior’s greatest ever outing inside a wrestling ring, but also one of the greatest wrestling matches of all time. This was the contest that made me a wrestling fan and, even to this day, I still get mesmerised every time I view it; the Retirement Match between Randy “Macho King” Savage and The Ultimate Warrior. This match had emotion (THAT reunion), it had drama, it had back-and-forth action, psychology on a whole other level (Warrior not running to the ring, his tights, the FIVE ELBOWS, etc) and, most of all, believability. The commentary team of Heenan and Monsoon also add to the occasion by being both informative and entertaining.

Savage was defeated and Savage did indeed retire from in-ring competition, but he wasn’t finished as a WWE personality. Moving on, Macho asked “Elisabet” to marry him, to which she responded “Oh, yeah”, leading to the infamous angle at the wedding reception where Jake Roberts set up the happy couple with a fake present (a king cobra). Savage, furious, demanded to be reinstated to get back at “The Snake” and was granted his request, leading to a rarely-seen outing at Tuesday in Texas (held three days after Survivor Series). The match is great, but the angle before the match were Jake gets a cobra to bite Savage on the arm and the after-match angle where Jake shows exactly why he is the best wrestling psychologist in history are amazingly awe inspiring. The actual match seems like an afterthought the two segments are THAT powerful in their execution.

The second disc closes like the first does, with a WWE Championship Match. WrestleMania VIII was a better event than history would have you believe and this match was easily the “Match of the Night”; Randy Savage v Ric Flair (in the latter’s first ‘Mania) for the WWE Title, following another sterling angle (Flair had doctored photos to “prove” he and Liz were an item before she met Savage), was a brilliantly paced and fantastically executed match that played out in front of a red-hot crowd in Indianapolis. Another great bout to end a disc, with only one match (so far) being a disappointment.

The final disc picks up where the previous one left off; Randy Savage is the WWE Champion and would defend that title against a host of new challengers. First one up is the future legend, Shawn Michaels. The Heartbreak Kid was accompanied by Sensation Sherri, giving this bout a little bit of history and a link to the past, with Sherri being the former Queen of the Macho King. There have been a few matches on this set that you won’t find anywhere else and this one, from a tour of the UK, is no exception. He two men, the respective high-fliers of their respective generations, have a fantastic match with near falls, great action and a great finish.

Speaking of rare matches, the following is probably one match that hardly anyone even knows about, let alone have seen. Bret Hart and Randy Savage team up to take on Shawn Michaels and Ric Flair. I’m one of those who didn’t know of this match’s existence, but it’s an awesome tag match with great psychology and a nice rub for the future WWE Champions in Bret Hart and HBK.

Of the remaining matches, there are two more Flair bouts (making four in total) an interesting match against Yokozuna, a great Falls Count Anywhere match with DDP that is better than I remember and, to close the set, a tag match in WCW for the WCW Title. All of these matches range from good to great and gives us a great reminder of how awesome Randy Savage was in his prime.

Disc 1 only has a single extra, but what an extra it is. The wedding of Randy Savage and Elizabeth at Summerslam 1991 was so over-the-top with the ultra-cheese, the uber-cheese, the ultra-uber-cheesy-cheese, that it was just brilliant in the context of a pro-wrestling spectacle.

Disc 2 has a duo of extras, the first of which is the introduction of Elizabeth as Savage’s manager, while the second is the crowning of Randy as the “Macho King”. Both are short, but extremely important segments of Savage’s career. The who’s who in both segments is something to behold as well, especially the coronation..

The third disc has SEVENTEEN extras, which is a massive amount of footage. It covers a lot of the promos and angles throughout Savage’s career in WWE and WCW, with a lot of them never having been released on VHS or DVD in the past and it’s a real treat to watch a lot of them.

First, the negatives. The fact there is nothing from Randy’s days in Memphis is a travesty. Unless WWE didn’t have the video library for that territory (I believe they do, but I’m not 100% certain), there is no excuse for not showcasing what caught WWE’s attention in the first place. Another negative is that there are four bouts against Ric Flair. Don’t get me wrong, they’re all really good matches, but Savage had really good matches with a myriad of other opponents and a few of them could have been shown instead. Finally, on the negative side, having the WrestleMania VI encounter is a bad decision, as the match is terrible and only there for filler. Savage’s bout against Crush from WrestleMania X would have been a much better choice.

With all of that being said, the biggest negative is the lack of documentary. Savage is one of the most iconic wrestlers in history with a great story to tell. Obviously not having the man himself involved makes things a little more difficult, but with Savage being such an influence on a lot of today’s talent AND some of his former rivals (DiBiase, Flair, Hogan, Michaels) being on good (or at least talking) terms with the company, the lack of any kind of “talking heads” is a disgrace. Oh, and Maria and Striker during the links are really, really bad (but, again, Maria is at least nice to look at).

OK, with the bad points out of the way, let’s concentrate on the good points. All of the matches have the original commentary, which is a lot more important than it first seems. Hearing guys like Bobby Heenan, Jesse Ventura, Gorilla Monsoon, Lord Alfred Hayes, “Superstar” Billy Graham and, of course, Vince McMahon call the action is a joy to behold and a real treat for all of those who are newcomers to the sport.

The fact there is only one really duff match over the total running time should be enough to tell you how talented a wrestler Randy Savage was inside the ring. His bouts against Flair, Hogan and especially Warrior are amazing, while his  matches against DiBiase and DDP are still worth watching. All in all, this is probably the best set of matches any of these profile DVD collections have ever had. I await the day we get an updated version with Randy’s involvement.

A brilliant showcase of the man and a great history lesson for all the fans.

Points: 7/10 (it would have been more, but the links are bad, there is a whole time period missing and the lack of interviews really hurt).