For the first time ever, WWE presents the Legends of Mid-South Wrestling. One of the 1980’s hottest territories, Mid-South garnered national attention for its revolutionary storytelling and bruising, athletic matches orchestrated by no-nonsense promoter, “COWBOY” BILL WATTS.

Now, the legends and Hall of Famers who cut their teeth in Mid-South share their tales of the fabled proving ground as we deliver OVER 20 classic confrontations from legends Ted DiBiase, Andre The Giant, Shawn Michaels, Ric Flair, Sting, Muhammad Ali, and many more… 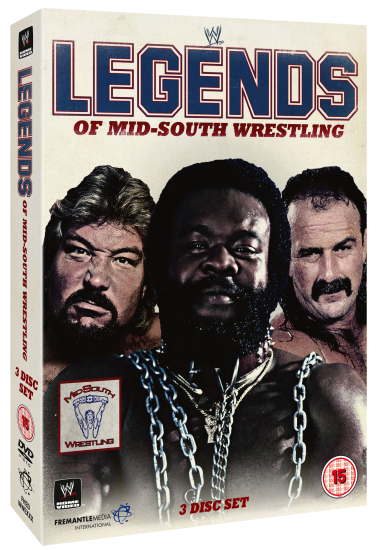 After the fall of ECW and the capitulation of WCW, Vince McMahon purchased the assets of both companies, including their respective video libraries.

This in itself, to a lay person, may not seem like a big deal, but the wrestling fans, this was the beginning of the best thing to happen since WWE became the only show in town. Suddenly, one company owned the footage for all three. The benefits of this continue to be reaped to this day with retrospective looks back at ECW and WCW, not to mention the profile DVDs that benefit greatly from being able to include footage and a period in history WWE had to pretend didn’t exist.

From there, WWE began buying up the rights to as many video libraries from as many defunct promotions, furnishing themselves with easily the most expansive wrestling library in existence. There was, however, a jewel in the crown that was missing. It took a long time and (I would assume) a lot of backroom politics, but finally Vince McMahon purchased the video library for Mid-South Wrestling; a promotion a lot of older fans consider to be the greatest weekly televised wrestling show in history.

The off-shoot of this is the very DVD I’m writing about today which will give many people their first glimpse into the genius that was Bill Watts’ mind.

Pretty much every name featured on this set will be known to the average / older wrestling fan from their time in either WWE or WCW, but most of them got their big break under “The Cowboy”. Names like Sting, Warrior, Jake Roberts, Ted DiBiase, Terry Taylor, One Man Gang, Jim Duggan, Tony Atlas, Junkyard Dog, Butch Reed, Magnum TA and Big Bossman (then known as Big Bubba Rogers) are all featured before their main run in WWE or WCW and all feature in good-to-great-to-amazing matches.

WWE have hit home-run after home-run with most of their recent feature releases. The PPVs are only as good as the show itself was, the countdown sets are usually harmless enough and only The Attitude Era DVD was a let-down.

This great trend continues with this fantastic look at a milestone in pro-wrestling history. WWE would have you believe that the introduction of Monday Night RAW was the first time you would regularly see Star v Star bouts on TV, but here in the early 80s, Bill Watts was pioneering that very thing with his one-hour television show.

The set is filled with great matches fought in front of rabid crowds, with every match on here having something to enjoy. Even the short semi-squash between Rob Ricksteiner (the future Rick Steiner) and Nick Patrick (the future WCW/nWo referee) and demolition by The Bladerunners are great for what they are.

Some of the epic storylines are given time on the DVD, including the build up to the ridiculously gimmicked Steel Cage match between Duggan and DiBiase (greatest one-punch knockout in wrestling history) and the brilliantly worked face turn of Ted DiBiase in the run up to his NWA Championship Match against Ric Flair.

Other highlights include seeing a (relatively) sprightly Andre the Giant, seeing One Man Gang in his prime, The Fabulous Freebirds (what a revelation these guys were) and the Terry Gordy v Steve Williams brawl.

The talking heads are all relevant and tell some great stories (old bitterness is still around for some of them too) and even if the footage is a bit rough at times, the quality of the product shines through from beginning to end.

I really can’t recommend this enough and the only reason this is not getting a 10/10 score is because there is nothing from Eddie Gilbert and “Hot Stuff Inc” on any of the three discs.

Maybe that is being kept for part 2.