“For nearly 30 years, Bret “Hit Man” Hart travelled the globe proving he was “The Best There Is, The Best There Was, and the Best There Ever Will Be”. From his roots in his family’s own Stampede Wrestling, to the bright lights of WWE, WCW, and his watershed return to the ring in 2010, no Superstar could match his unmistakable presence in the ring. Now in Bret “Hit Man” Hart: The Dungeon Collection, the Hit Man himself compiles his best matches never-before-released on DVD. Bret takes the viewer behind each match in a brand new, revealing interview detailing the inside stories surrounding these rare matches. Over 8 hours of in-ring action is presented, including classics from the Stampede Wrestling vault as well as vintage WWE bouts against the top stars of the 80s and 90s.” 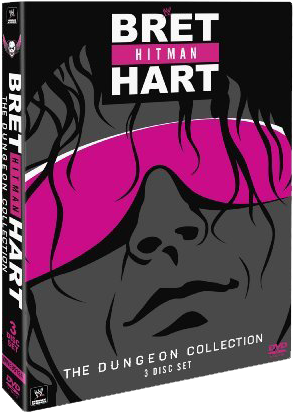 Anyone who was a fan in the early-to-mid-90s will recognise that catchphrase and be able to utter it in the same speech pattern as the man who made it famous; Bret “Hitman” Hart.

Whether you believe that statement to be true or not (and surprisingly, during one of his links, Bret Hart himself gives the honour to someone else), you can’t deny that Bret Hart has left an enviable legacy in the world of professional wrestling.

There have been a number of collections released to chronicle “The Hitman”, so you may wonder why WWE have released another one. The answer is simple; with such a back-catalogue of matches, there are bound to bouts you haven’t seen and it’s this mantra that runs through the Dungeon Collection.

19 matches that have either never been seen or only been available on the original broadcast / release are linked by Bret Hart himself as he relays either his reasons why the match made the cut or his thoughts on the opponent(s) we’re about to see him face.

Of the 19 matches on the set, some of them are worthy of the “hidden gem” accolade. The WWE singles bout against Dynamite Kid is wonderful and the bout from In Your House 3 against Jean-Pierre Lafitte is one of my favourite matches from the era.

Other bouts to make a good impression for various reasons are the ones against Bam Bam Bigelow, Steve Austin, The Patriot, Mr. Perfect and Tiger Mask II. In addition to that, the match for the WWF Title against Diesel was a great example of how to keep the title on the champion while also making sure the challenger remains strong once the final bell has rung.

Negatives are genuinely few and far between. The match against Andre the Giant is nothing to write home about, but this can mainly be put down to the condition of Andre at this point in his career. Bret Hart only has himself to blame, however, for bemoaning Ric Flair for sticking to a formula during his matches. For Bret, the original owner of the “Five Moves of Doom” sequence, to castigate anyone for sticking to a trademark sequence shows he is blind to his own faults.

One final issue is that some of the video quality is well below the standard expected, but again this is not the fault of the WWE production team and is simply down to having to work with what they have. The two matches that really suffer from this are against Buzz Sawyer and Andre the Giant (the latter of which seems to have been shot on a mobile phone).

The original commentators on all of the bouts is a great masterstroke as it keeps things in the era they took place and for those who lived through at least one of them will have a nostalgic smile on their face.

All in all, this is a very good release and has some genuine classics that, thanks to WWE’s extensive library, have been saved from obscurity.

If you decide to plump for the Blu-Ray, you also get -: