Bret Hart: My Real Life in the Cartoon World of Wrestling Book Review

Bret Hart: The best there is, the best there was and the best there’ll ever be…words that Bret Hart proclaimed about himself throughout his career. On paper it appeared to be nothing more than a wrestling gimmick, but when Bret Hart allowed the WWE to release a DVD documentary about his career it became rather apparent that this man really believed that moniker. The weird foible was that we finally had a look into his career only for it to be ruined by the very man we wanted to know more about. A few years later he released his autobiography – entitled “Hitman: My Real Life in the Cartoon World of Wrestling” – in what was possibly one of the most anticipated wrestling books of all time. Did Bret Hart once again taint his own product with his own pride, or did he truly attempt to be fair when writing his autobiography? 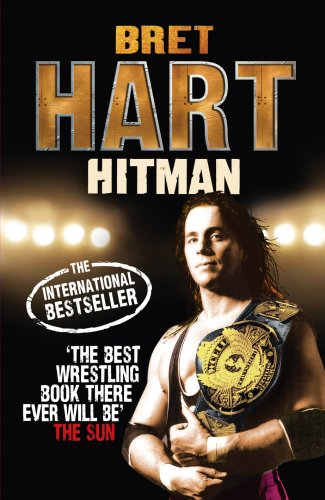 The first thing you’ll notice about “Hitman” is that it’s long. Really long. So long that it warrants a glossary, which is something I’ve never seen in a wrestling autobiography. It covers his first memories of wrestling, of walking around Stu Hart’s dungeon to Stu Hart’s death in 2003. I have to give Bret points for writing this book at a later point in his life rather then a number of wrestlers who have written theirs at such an early age, they’ve barely lived their life. Unlike a lot of wrestling autobiographies that tend to gloss over the wrestlers early life, Bret covers his earlier life in as much detail as his later life. However unlike a lot of wrestlers Bret grew up literally surrounded by the wrestling world and was involved with his father’s promotion from an early age.

“Hitman” written in the wrestling vernacular, but Bret explains what every term means so it’s accessible to everyone. Anyone who does choose to read it will be lost in it, it’s just that immersive. Bret does a fantastic job of keeping you hooked with his stories whether they are entertaining or shocking. If for some reason you were expecting a light hearted book, then you will be sorely disappointed. It can get quite dark and depressing at times which somewhat fits with the message of the book. Bret never lets you forget how many people have given their lives for the business, making death a recurring theme throughout the entire book.

Obviously Montreal is covered in great detail, just in case you weren’t completely sick of hearing about what happened on that night. If you are a wrestling fan you really don’t learn anything new, except evidently Shawn Michaels sat on the floor during Vince and Bret’s fight (during which Bret gave Vince such a punch he literally flew off his feet) crying like a little baby. Then at the end of it Bret, being ever the diplomat, went over and shook Shawn’s hand and thanked him for the match. I can’t help but think that with these two events are examples of Bret embellishing the truth.

The attacks on Vince McMahon start right off the bat with Bret Hart stating that Vince McMahon had tried to steal his dignity years earlier in the preface. Vince is portrayed as a ruthless business man but not once does Bret take away from what the man achieved. Bret also never forgets what Vince did for him when he was working for the WWE.  Shawn Michaels doesn’t come off to well in this book either. Considering everything that went down, it’s hard to fault Bret for not liking him. HBK comes off as something of a bratty punk throughout this book who had no respect for the wrestling business which is true to a degree.  Triple H doesn’t come off any better (at one point Bret blames Shawn and Hunter for destroying the wrestling business) nor does Hulk Hogan, Ultimate Warrior, Ric Flair, Scott Hall, Kevin Nash to name a few. Even his own brothers and sisters are heavily criticised in this book to the point where someone of them appear quite psychotic. The only major people who completely escape criticism completely in this book are Owen Hart and Bret’s parents.

Alright so when it comes to the wrestling front, Bret suspiciously ignores any criticism on his performance in the ring unless he attacking someone else’s claim that he was bad. He’s still as much in love with his in ring performance and legacy as he was in his DVD. But in other facets of his life, such as his marriages he’s not against talking about his failures. To Bret’s own admission he neglected his family) and slept around with any woman that would so much as bat an eye at him on the road.

With everything that’s happen to him throughout his career it’s easy to think that Bret would be bitter about the wrestling business and to be honest, he is – Bret outright states that he hates wrestling now. They key word there is now – as Bret sees it, his world of wrestling is dead and has been replaces by a shoddy copy, an industry full of sleaze and politics and an industry where Vince McMahon can be world champion. But the generation that Bret came from he still respects. That isn’t to say he sees his generation as some perfect industry – he accepts it as the drug ridden, alcohol fuelled, steroid binge that it was and addresses the flaws with it. This era is something that he focuses on and in later parts of the book he presents an interesting view point of an old timer seeing the wrestling world change around him.

To be put bluntly, buy this book and read it. Bret presents an interesting view on the wrestling world and I doubt a story like his will ever be told again. Yes this view has the occasional blemish due to Bret Hart’s own delusions of grandeur, but it’s so unique that you have to read it regardless of the flaws.