By Henry Higgins
Wrestling DVD Reviews
This page contains affiliate links. At no additional cost to you, we may earn a commission if you click through and make a purchase. Learn more

That one quote (whether true or not) can only mean one man; Bret “Hitman” Hart. A man who did it all in pro-wrestling and a hero to millions around the world, it’s unfortunate that his entire career is encapsulated in a single night – November 9th, 1997.

During the early days of the Monday Night Wars, WWE was in serious trouble, both financially and from a creative standpoint. WCW had launched Monday Nitro and with a mixture of dirty tricks and major acquisitions of WWE talent (specifically, Luger on the first Nitro and then Hall & Nash in 1996), this led to the creation of the nWo and a period of Vince McMahon getting his ass kicked.

During this time, Bret Hart was leading the charge alongside Shawn Michaels, a rising Steve Austin and Undertaker.  A young Canadian film-maker by the name of Paul Jay decided that this would be the time to chronicle the life and career of Bret Hart.

What he captured was possibly the most infamous period in the history of professional wrestling… and nothing would ever be the same again. 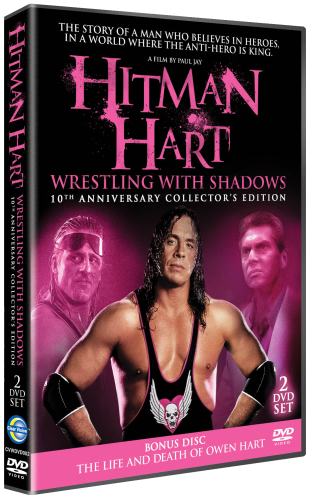 The Life & Death of Owen Hart

Along with Beyond the Mat, this DVD is a must-see documentary for anyone who considers themselves a wrestling fan.

From the Canadian Stampede PPV in July of 1997 to Survivor Series in November the same year, a documentary crew were given unprecedented access to the behind-the-scenes workings of WWE, with kayfabe being tossed aside in an effort to show what it is really like on the road with a major-league wrestling company.

Paul Jay could never in a million years have imagined what would fall into his lap. Bret Hart being offered a US$9million deal to join WCW, but declining that to pledge his loyalty to WWE after being given a 20 year deal, only for Vince to tell Bret to renegotiate with WCW and then screw him at Survivor Series in the single most famous incident we may ever experience… pro-wrestling was as real as real could be.

Owen Hart, as we all know, died in a tragic accident at Over the Edge ’99 and this feature covers his life and career. It’s biased at times, but it’s still a brilliant watch. The only issue is that at 45mins, it’s not enough for this reviewer. One can only hope that he eventually gets inducted into the Hall of Fame and has a credible WWE DVD release that his career deserves.

This is a fantastic two-piece set that is, as said previously, a must-have for all wrestling fans.

Once you get past the fact Bret Hart is a mark for himself and the biased nature of some of the commentary (especially on the Owen Hart disc), the fascinating documentaries are a great watch and a brilliant insight into the backstage workings of both WWE and Vince McMahon himself.

The choice of talking heads, especially on the Owen disc (Bad News Allen, Honky Tonk Man, etc – all guys who worked in Stampede Wrestling at some point – and Dave Meltzer) also add a bit more to the set than the standard WWE documentaries.

The last five minutes are heartbreaking (no pun intended) and left me with tears in my eyes.

In addition to this, the two interviews are pretty damn good too. With a ten-year gap to allow a different perspective to shine through, you get the feeling that time has healed Bret’s wounds and it’s interesting to hear him discuss the subjects raised in the original documentary.

As essential a purchase as you can have in this field.