Being Canadian I have something of a soft spot for Stampede Wrestling and the antics of the Hart Family. So when books relating to the Hart Family emerge I always try to get my hands on them at the first opportunity. If you enjoy wrestling books chances are you have come across one of the previous autobiographies written by other members of the Hart family, or even by non family members. 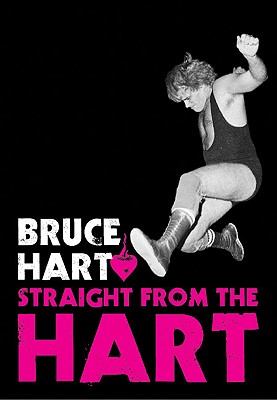 There usually tends to be a myriad of controversy that surrounds the release of their books. “Under the Mat” by Diana Hart was accused of being largely a lie, “Broken Harts” by Martha Hart was 200 pages of antagonizing Vince McMahon and trying to convince the reader that Owen Hart hated the wrestling business, and “Hitman”, while I myself said that it was a great book,  was ruined in part by Bret’s giant ego.

If you are wondering which Hart Bruce is, he is the second born son of the legendary Stu Hart. For those of you who want a more relevant description, he was the one that refereed that abysmal Bret Hart vs Vince McMahon match at WWE Wrestlemania 26. Beyond that he was the head booker for Stampede Wrestling for a period of time, its owner, and at one time one of the top babyfaces in the promotion. His book is something of an autobiography of Stampede Wrestling and the Hart family more than himself; he doesn’t start talking about his life until about 10 chapters in. It’s full of interesting stories about his life working for Stampede Wrestling, Stu Hart, and his views on the problems in the Hart family.

I elected to (or made the mistake rather) of reading some other reviews before sitting down to read “Straight From the Hart” and I was expecting another bitter ex-wrestler grinding his axe with WWE and generally offering inaccurate information. So when I sat down to read it I didn’t exactly have high hopes. All I can’t say I don’t understand the problem my contemporaries had with this book; I think much of the criticism levelled at it is underserved.

The biggest complaint I’ve seen is that most of the reviewers claim Bruce Hart got basic facts wrong, and therefore is somewhat untrustworthy. The most quoted issue I’ve found is that they claim he does not think Bret had creative control over his character in WWF before leaving in 1997. However Bruce actually said he does not know if Bret had creative control (him and Bret weren’t on speaking terms then) and then comments how idiotic such a promise to a wrestler would be. Other issues that have been brought up about the book is that Bruce is bitter about the wrestling business, which is only true if you equate bitter with pointing out what he believes to be the flaws.

I wondered to myself why this book hadn’t caused any controversy upon its release like so many of the previous Hart related publications. It’s clear the tensions between members of Hart Family are still present to a degree; Smith Hart (oldest Hart son) himself told me as much when I had a chance to talk to him recently. The only reason I can think of is that either nobody cares about what he has to say because he is not as well-known as the others (which I find hard to believe) or nobody is taking issue with it because he’s right.

One of the reasons I think he is being truthful is the way he talks about his wife Andrea.  She left him for the British Bulldog Davey Boy Smith; Bruce does not vilify her even though it must have been hard on him. He merely acknowledges it and said what happened. Bruce does not let personal bias cloud his judgement and he reports it as it happened, not to further his own agenda.

Wrestling history is never going to be accurate. Outsiders looking in will always lower wrestling to something beneath them and wrestlers will change history in order to make themselves look better. Bruce does a reasonably good job of reporting things how they happened and not being vindictive about the past. This is probably one of the best wrestling autobiographies I’ve ever read and I don’t say that lightly. It’s not the best, but it’s certainly in the top 5.