The Road Warriors were involved in great eras of tag team wrestling with yourselves, The Fabulous Freebirds,  The Midnight Express, The Outsiders, Harlem Heat, The Steiner’s, The New Age Outlaws, The Nasty Boys and Team 3D etc. What do you make of the state of tag team wrestling today in TNA and WWE?

To be honest with you there are no tag team divisions. I say that with respect to the guys, it has nothing to do with new wrestlers coming up or anything else, it’s just that we’re in a new business. With things like the Internet, Twitter and Facebook you have to be the guy now, you don’t have time to learn and it’s not the guys fault they just don’t have the luxury of time on their side.

If I had anything to do with either WWE or TNA I would definitely put an emphasis on tag team wrestling. The Road Warriors proved in an era when the wrestling business was at it’s lowest tag team wrestling can be the main event, we sold out venues in the NWA and we did the same for the WWF at the time.

It’s proof tag team wrestling can headline and be the main event if it’s done right. You can’t just throw two people together, the fans like to believe in a family dynamic like the Road Warriors or The Steiners or Harlem Heat, they don’t just want to see guy A and guy B thrown together to form a tag team.

What was it like when you came back to WWE in 2005 teaming up with Heidenreich and winning the tag team championships?

It was nice winning the tag team belts because it was the only one I won with ‘WWE’ on but I hated every minute of it because Heidenreich was not a good partner. He was not made out for the Legion of Doom. The LoD takes a special person and a certain amount of respect to the heritage and the gimmick, but I’m all about being professional and so was Hawk so I did it because the office asked me to and I did them a favour so that’s why I went ahead with it.

What was it like being inducted into the Hall of Fame last year for the achievements of yourself and Michael?

Being inducted into the WWE Hall of Fame is a culmination of what you have achieved throughout your career and I didn’t realise what Hawk and I had achieved until I looked back on it there the night of the Hall of Fame. We literary won almost every tag-team title you could possibly win in wrestling and that’s history because it will never be done again because a lot of those companies will never exist again nor those world titles.

As an achievement, I’m very proud of that and even though our business is an entertainment, it does take a lot of years of hard work, being away from your family for long periods of time but Hawk and I achieved something that nobody else will achieve.

It’s been 28-years and no one else has got the standing ovation we got at the Hall of Fame last year. 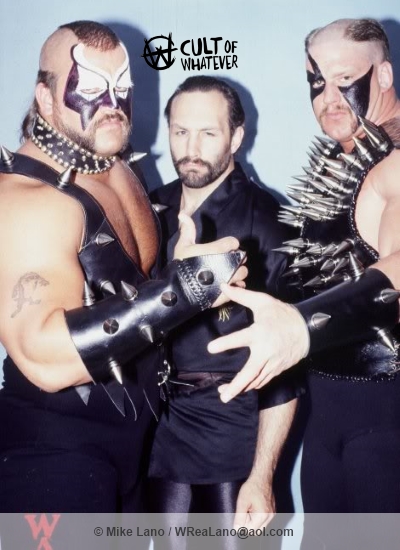 Having worked for both Eric Bischoff and Vince McMahon, how would you compare the two in terms of similarities and differences?

They’re both narcissist’s and they both have huge egos, I think Vince was more straight up and Eric was more devious. That was the nature of the time back then and that is what the times called for and the business called for.

Vince impressed me by getting in the ring and dong all of those battles with Stone Cold Steve Austin, he put his body on the line and he became one of the guys as well as a boss.

What are you making of your brother John’s current role in WWE as GM of Raw and Executive Vice President of Talent Relations?

When you see John on TV that is him being his natural self, which is making that whole story-line as popular as it is, you may not agree with his methodology, but he is doing what he thinks is right, and he is going to do it despite what anyone else thinks, but he’s in a no-win situation. As well as being on television he also has a company to run, he is an employee too and he has a hundred employees under him. I wouldn’t want to have his job for anything in the world.

Could we see you return in one form or another to television with either WWE or TNA?

I’m in good enough shape to do it and if I wanted to wrestle I could but since Hawk passed away every year that goes by it gets harder and harder for me to even want to do it. I still do personal appearances and charity events around the country for my fans.

All photos provided and authorised for use by Mike Lano