Every era had their icons, those grapplers who defined the sport, who pioneered aspects of what we see today, from entrance music, flamboyance, showmanship, charisma, technical prowess, toughness or a combination of all of the above.

From the in-ring prowess of a guy like Lou Thesz, through the groundbreaking character of “Superstar” Billy Graham to the magnetism of Hulk Hogan through to the modern day icons of Shawn Michaels and Undertaker, each one has left their mark on the industry.

It’s these legends of the squared-circle that are celebrated as we count down the top 50 Superstars of all time, so allow Todd Grisham to take you through the list as we find out who made the list and, more importantly, who came out on top and is crowned THE greatest wrestling superstar of the all. 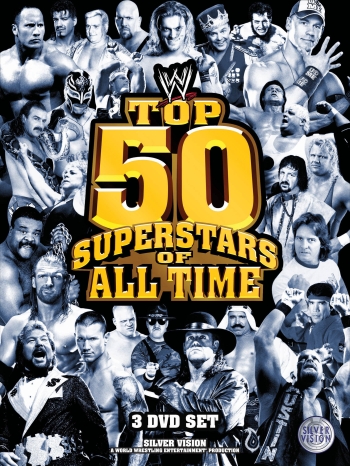 Since wrestling is a dirty word in the world of WWE, what we have here is a countdown of the top 50 “Superstars” in wrestling history. Of course, what it should actually read is that it’s a countdown of the top fifty who competed in the United States as there’s no-one representing Japan, none of the great Mexican or European greats get a mention and even some of the top American stars (Sting, Warrior, I’m looking at you) fail to feature as well.

Also leaving a sour taste in your mouth is the placing of some of the talents on the list. Now, if I told you last year that WWE were putting together a list of the top 50 superstars for a DVD countdown, I’d wager that your top three would be  Hogan, Austin and The Rock. Maybe not in that order, but those would the top three in some way or fashion. To be frank, any other line of thinking is just crazy talk, even if a strong argument could be made for HBK and Bret Hart.

What you wouldn’t expect is to find Hulk Hogan at #23 in that countdown. I’ve deliberately left out the order above so as not to spoil it for anyone who wants to go in blind (which, in that case, you should also avoid the chapter listing on the disc as well), but Hogan’s placing is so ridiculous, it can’t go without mention.

Now, WWE have said that this list was put together after a poll of the current WWE locker room. Grisham drills this into you any chance he gets, while also adding that some of the placings will be controversial in an effort to appease those who find the fact Hogan isn’t even in the top bloody twenty a little hard to stomach.

That’s not the only issue. Harley Race deserves to be in the list, but not above Ric Flair, Hulk Hogan, Bockwinkel or Bruno. Credit, however, is merited on the fact Gorgeous George places so high. Other names on the list will be lost on today’s audience, so it’s also good to see that this isn’t dominated by those wrestling after 1998.

If you can ignore the actual placings, this is actually a really good look at 50 wrestlers, with archive footage, relevant talking heads and a brief look at why that particular wrestler is on the list. You won’t agree with them all, but the argument for most of them is pretty strong.

Possibly most satisfying is the lack of a burial on any of the talent who feature, especially for Kurt Angle, who is praised to high heaven by all who get to comment on the former Olympic champion, and Jeff Hardy.

Twenty-two complete matches and one ultra-high-profile confrontation make up the second and third discs, with the highlights of the pre-90s years being Jack Brisco taking on Dory Funk, Jr., Gorilla Monsoon challenging Muhammed Ali, possibly the two most charismatic men of all time in Dusty Rhodes and Billy Graham going at it for the WWWF Championship, Terry Funk v Harley Race for the NWA Championship and a rarely seen six-man elimination match from MSG.

Of course, a lot of this won’t be to the taste of many modern fans, but if you stick with it, the matches are a real eye-opener to the quality of the guys involved. Not everyone on the list is featured in matches, which is understandable with wrestlers from the early years where footage may be hard to come by or be of a quality too poor to use.

Buddy Rogers, Pat Patterson, “Classy” Freddy Blassie, Gorgeous George and Killer Kowalski all fall under this category, but there can be no excuse for not featuring Backlund, Bockwinkel, Kane, Sgt. Slaughter and Jimmy Snuka, not when some of the wrestlers have make more than one appearance.

Some of the matches chosen also seem a little odd when you consider what could’ve been chosen, but some credit should go to WWE for also not picking bouts that feature a lot elsewhere, especially the later bouts from episodes of RAW and Smackdown. It’s interesting to note that there’s nothing from 1993-1998 in the match listing, which, for the latter part of that time, is strange as there is plenty of quality bouts to have featured, not least from guys like Shawn Michaels, Steve Austin and Bret Hart.

From the more modern era (1990-2011), however, there are a few stand-out matches. The four-way from RAW, the eight-man from RAW and the tag-match from Smackdown are excellent and possibly forgotten matches that are well worth another look, while the Halftime Heat bout is a curiosity that is very much of its time and both the No Way Out tag-match and Edge v Undertaker close the set of a very well received high.

The order of the list is going to be the main talking point stemming from this release and with good reason. Hogan at 23 is not only wrong, it’s downright insulting, as is having Ric Flair so low as well. Certain guys being included seem wrong for a number of reasons, be it not having been around long enough or done enough to merit a place, while those who are missing like Sting and The Ultimate Warrior also create an air of something being not quire right.

With that in mind though, if WWE’s claim that this list was put together by polling the locker room (and the inclusion of certain high-profile TNA stars do support that), then you have to chalk it up to democracy in action. As I said earlier, if you can move away from the order of the list and take it as a countdown in no particular order, it makes it easier to stomach.

The sections on each wrestler are well put together featuring archive footage and talking-heads explaining why so-and-so deserve their spot, so that aspect is very enjoyable. Add in a wide array of matches from the late-50s to the modern day.

All in all, it’s an enjoyable three-disc release that is worth the price for the matches alone.