2005’s ‘Are We There Yet? Tales from the Never Ending Travels of WWE Superstars’ was a book that I rather enjoyed. Wrestling is of course famous for the rigorous travel schedule and the Superstars themselves have reputations of being a boisterous bunch so mixing the two elements together guaranteed a hit.  What we got was exactly that – it wasn’t complex, long or even a thought provoking read but it was pretty enjoyable.  Five years later we have ‘Rumble Road: Untold stories from Outside the Ring’ can it live up to its predecessor? 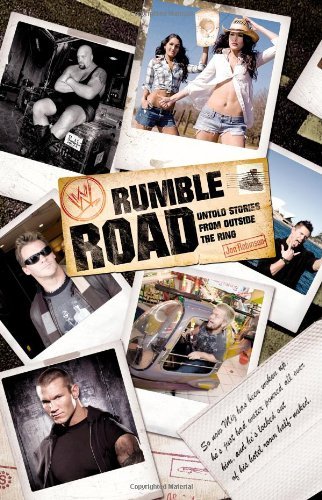 There’s not much that I can say without spoiling the stories. Most of them I believe are true but unlike ‘Are We There Yet’ I can see kayfabe slipping into reality at some points. I suppose it is in the realm of possibility but there’s something unbelievable about Mark Henry being able to effortlessly lift a Chevy Impala out of the ditch. Maybe if this was Mark Henry at his prime as a body builder but not now.  Also the superstars talk about iPods and Phones to a rather annoying degree. At point where I swear one of Christian’s stories is an advertisement for the iPhone.

‘…What’s great for me is the invention of the iPhone, because so many times there are disputes about who is right and who is wrong during these talks so I just jump on my iPhone and use Google or Wikipedia to figure out 99.9 percent of the time that I’m right. We always seem to argue over which actor appeared in a certain movie or which band played a certain song. The iPhone makes it so easy to end an argument.’

Unsurprisingly the most interesting stories are from the senior and veteran Superstars. There are some funny stories from the newer guys but at times all I could think was either these guys live a pretty dull life on the road or missed the point of this book altogether!  A prime example of the generation gap is when Cody Rhodes is talking about listening to Taylor Swift on the radio whereas Goldust talks about Davey Boy Smith throwing fire crackers at traffic.

“We pull up a little bit, then we slow down and let them catch up, and Davey Boy leans out the window with these roman candles and starts shooting them…”

I’m a fan of Swift but if she’s the best you have compared to throwing explosives out of moving cars then there is really no contest for what I’d rather be reading.

One aspect that annoyed me was the complete lack of star power in the book. The biggest star who provided a story was Randy Orton and his big contribution is to essentially brag about how easy he has it on the road now! He no longer has to deal with the rigmarole of travelling from town to town, finding a hotel or missing his family.  There’s a five year gap between this and ‘Are We There Yet?’ and nobody could sit down John Cena, HHH, Batista or HBK for five minutes and get a story or two of something crazy that happened on the road?

I suppose it boils down to whether or not ‘Rumble Road’ is as good as ‘Are We There Yet’ and the answer is no, not really. I do appreciate that they gave five years between releases and aren’t killing the gimmick with yearly releases but the concept still feels a bit worn out. There’s nothing technically wrong with it but the collective lack of personality from the newest superstars bored me at times. It’s also noticeably shorter then ‘Are We There Yet’ and there’s really no reason why it has to be. But for what it is I would say it’s still reasonable and relatively enjoyable. If you have a youngster and are about to take a long road trip or if you yourself need to kill some time, then this book will fill that role admirably.