A great idea in theory, but a pretty pointless one in practice. A once-every-twelve-months concept where Smackdown and RAW go head-to-head to show who IS the best WWE brand would work better if the brands were actually kept separate for the remainder of the year (Royal Rumble Match aside). At least then the thought of seeing seven guys from each show clashing would have amazing appeal, with the weeks leading up to the PPV having mini-invasions on both sides (for an example of how to do this properly, watch the build to Team Raw v Team Smackdown going into Survivor Series 2005). As it is, the fact that doesn’t happen hurts the whole idea.

There are a number of other factors that hurt the 2010 version. First is that until the Hell in a Cell PPV was done the previous month, Smackdown didn’t actually brag about being the winners in 2009. This made the idea of winning seem not that important. Secondly, and probably more importantly, WWE presented a massive 7-on-7 elimination match at Summerslam AND the following PPV is Survivor Series, where elimination matches are synonymous. In reality, the RAW v Smackdown Bragging Rights Match should be the Survivor Series event every year. 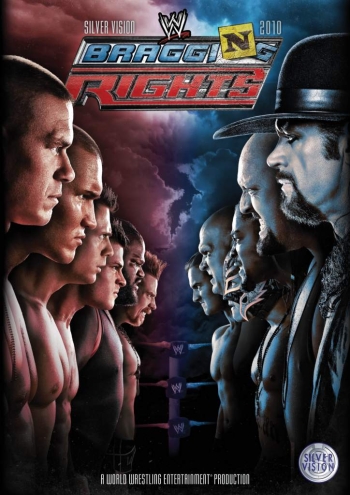 Bragging Rights was the second of three PPVs in a row where Daniel Bryan was in the opening contest and had arguably Match of the Night. At the previous month’s Hell in a Cell, he tore the house down alongside Miz and John Morrison in a three-way-submissions-count-anywhere contest, while, at Survivor Series the following month, it was Ted DiBiase’s turn to benefit from working with the former Ring of Honor champion.

On this night, Dolph Ziggler was the opponent and the two mid-card champions had an awesome match that was amazingly paced, stunningly executed and had plenty of near-falls/false finishes as it built to a high-octane finish. What must also be acknowledged is that Vince is allowing Bryan’s matches to run for a decent length of time, meaning a story can be told and the fans get emotionally invested.

After such a brilliant start, the remaining matches had a lot to live up to… and it should come to the surprise of no-one  that they didn’t manage to do it. The tag match between Cody/Drew and Cena/Otunga was made redundant after what happened the next night on RAW, DiBiase v Goldust was alright (Maryse’s outfit was the highlight) and the Divas match was better than expected, but Cena coming out to his own music made a mockery of the “Cena is part of Nexus” angle that was ongoing.

Moving on to the three main-events, the Buried Alive match was much better than the Hell in a Cell bout they had the previous month (the shortcuts afforded by fighting all around the arena helped a great deal) and the WWE Championship contest was more about Cena and Barrett than Barrett v Orton, so suffered because of it. The finish was also a tad lame, even if it did make storyline sense.

Sandwiched between the two world title matches was the 14-Man Elimination Tag and if there’s one thing WWE excel in, it’s large-scale multi-man matches. The last half of the bout was fantastic, with the closing moments being really exciting.

There are two extras on the disc, with the first being a short interview with the victorious Team Smackdown where Big Show gives props to his guys. The other extra is a rather strange video of Undertaker walking down a hallway, opening a door and then stepping into the light. I assume it’s meant to be the modern day equivalent of what happened after the Casket Match at Royal Rumble 1994, but it’s still a really odd extra.

A decent enough show, with the opener and the Bragging Rights Match being worthy of repeat viewing, but the event overall is not an essential purchase. The pointless extras don’t add any value either, so if you can pick it up for £10 or less, I’d say buy it. Anything more than that and I’d give it a miss.