Going back to 1988, Summerslam has always had a special place in the WWE calendar. One of the original “Big Four” PPVs, the name carries a lot of weight and the expectation of big matches and a stellar broadcast weighs heavily as the fans demand quality wrestling action.

Unlike the other “Big Four” events, Summerslam had to work without the importance of WrestleMania, the massive attraction of the Royal Rumble Match or, at least in the main, the theme of Survivor Series that was afforded by the elimination match format. Summerslam had to sell itself on the matches on the card and nothing more.

That being said, Summerslam has a history of great matches, with the original event’s top-liner between the Mega-Powers and The Mega-Bucks starting it all. Following on from there, we had the Match Made in Hell between the teams of Hogan/Warrior against Slaughter, The Iron Sheik and General Adnan, Bret Hart v Mr. Perfect, Bret Hart v Bulldog, Bret Hart v Owen Hart, Bret Hart v Undertaker (OK, there’s a pattern emerging), Undertaker v Austin and, more recently, Hogan v HBK all headlining the show and all delivering in their own way.

For a lot of fans, the recent years have been lean on meaningful battles, but going into Summerslam 2010, the arrival of The Nexus had shaken things up and really created some major interest. The big question though was whether WWE would capitalise on this or blow everything that had been carefully created to this point. 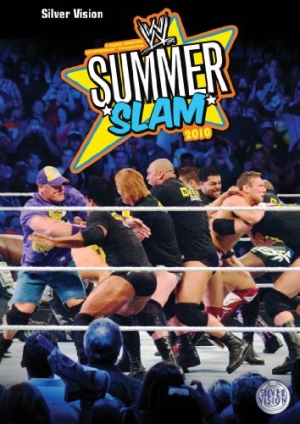 Before the show starts, we get treated to another wonderful hype video by the WWE production staff for the main event. While not up to the pinnacle of their output, it does the job wonderfully well. From there, we’re straight into the first match, which is a rather great encounter (marred by the finish, although I understand why it was done) between Kofi Kingston and Dolph Ziggler for the Intercontinental Championship.

In hindsight, this feud lasted for quite a while as they were still battling over the IC belt only a few weeks ago. Also of interest to note is that I hadn’t realised how long Ziggler and Vikki Guerrero have been an on-screen couple. I’d never have predicted they’d still be together months later. Oh, and Vikki is fantastic as usual. My only problem with her gimmick is that it proved so popular (in the hated heel sense) and worked so well, a lot of woman took the screeching part of it as their own, not realising it just makes them annoying and unwatchable.

The other undercard matches on the show range from OK to pretty good only. Melina v Alicia Fox is passable enough, but the highlight is the entrance attire the challenger wears (also, at certain angles, the flesh-coloured wrestling attire she wears genuinely make her look butt-naked). Melina also debuts a new finisher (a snapmare-driver), that no-one really comments on and was never used again. It was a waste, but it least it meant she didn’t do that stupid leg-lariat thing and scream like a howler monkey who stood on a rusty nail. Thank God for Lay-Cool’s post-match verbal and physical beat-down.

The less said about the 3-on-1 match between Big Show and the Straight Edge Society the better. Seriously; WWE had this great little faction with a verbal and in-ring maestro in CM Punk as the leader, the group was getting heat wherever it went, they gave a brilliantly executed reason for Festus being repackaged and were on a roll. So what happens? They’re put in a situation where Big Show humiliates them at every turn and become a joke to the point they can’t recover. I don’t blame Show for that (as he can only do what he’s told to do by the booker), it’s a problem WWE seems to have a lot; build someone up, have them at the point where they can crash through the ceiling and then they pull the rug from them. It sucks now, it sucked back then and it’ll suck in the future.

Randy Orton taking on Sheamus should’ve been so much better than it was. Truth be told, the match doesn’t really catch fire and it feels like there’s a lack of chemistry between the two wrestlers. A totally bullsh*t finish is the cherry on this particular anti-fan-friendly cake. All of this means that the undercard would depend on Kane and Rey Mysterio to salvage some pride. Could they do it? Of course the couldn’t, but at least they gave it a good go. It didn’t help that they were saddled with the “Who Ran Down Stone-Cold” storyline rehash, but at least they both tried and the finish was awesome, with the post-match shenanigans being pretty fun.

Summerslam was booked as a one-match card and so the main-event had a lot to live up to, especially as the preceding 2hrs+ had done nothing to really excite or really be memorable in any way… with the exception of Miz on the mic. A skit backstage with Edge and Jericho set the question for the night – would Miz join with Team WWE? An in-ring promo after the abomination that was the Handicap Match would give us our answer… and that answer was yes, Miz would join forces with his fellow superstars (his standing being so great, John Cena allegedly told Miz that he was the only person on the planet who could see him).

Unfortunately for Miz, however, he’d left it so long to make a decision, Cena and Hart had sought out someone else for the last spot on their team… and that man was Daniel Bryan. Although, by the utterly apathetic way Cena announced him, he may as well have put Barry Horowitz on the squad. It didn’t matter though, as the fans loved Bryan’s return to WWE and, more importantly, it made perfect storyline sense. Daniel Bryan had been fired from Nexus, so he wanted to get back at them and also, as a former member, he would have the inside scoop on Nexus, giving his opponents an advantage.

Far removed from the jobber he portrayed on NXT, Daniel Bryan was allowed to shine and put on a great effort, with the main-event itself being an absolutely fantastic match until the closing minute, where all the goodwill in the world wouldn’t be enough to overcome one of the worst main-event booking decisions in a long, long time.

The crowd are seriously into it, mainly because WWE booked the run-up to Summerslam almost flawlessly. The pre-match vignette showcases this perfectly when the fourteen men have a staredown in the middle of the RAW ring and the hard-cam can’t focus because the fans are causing it shake all over the place due to how excited they are. I can’t remember the last time that happened, but it showed that, at least for this angle, WWE had it right.

Which is why it baffles me how they could get the finish so wrong. Cena being DDT’d on a concrete floor and then overcoming two-on-one odds less than two minutes later is ridiculous and took every single piece of shine this match had. It ruined the great performance by Daniel Bryan, the efforts from everyone else and it damn nearly killed off The Nexus itself.

Because of that, you end up feeling a sense of anger and frustration as the end-of-show logo appears on the screen. Not good, WWE, not good at all.

One extra and it’s the usual post-match backstage interview that you get on pretty much all the WWE PPV releases.

Summerslam is quite possibly the worst PPV of 2010. None of the undercard matches are really worth watching and the main-event is going like gangbusters until the finish, which ruins all the good work beforehand.

I genuinely cannot recommend this show to anyone except those who want to have the complete set of PPVs/WWE releases.