When you think of the best manager in the history of the wrestling business, Jimmy Hart and Bobby Heenan are the two names that jump from the pages of wrestling’s past, but even the staunchest Hart fans would acknowledge that “The Brain” was in a class all by himself.

Excelling as a manager and a commentator (sorry, broadcast journalist), as well as being fantastic in the ring when his actions forced him into matches, Heenan had it all. A stunning mouthpiece for his talents, “The Brain” elevated any talent that was placed under his charge and got under the skin of fans the world over as he did it. The Heenan Family in both the AWA and WWE comprised of many fantastic wrestlers and huge names, including Nick Bockwinkel, Ray Stevens, Mr. Perfect, Haku, Rick Rude, King Kong Bundy, Andre the Giant, The Brain Busters, The Blackjacks, Ken Patera, Terry Taylor, The Barbarian and Harley Race.

Bobby “The Brain” Heenan was a once-in-a-lifetime talent who could do serious and comedy equally well, making you laugh at him and want him to be destroyed in equal measure. Every fan from every generation should watch this DVD and see one of the greatest wrestling talents of all time at his best. 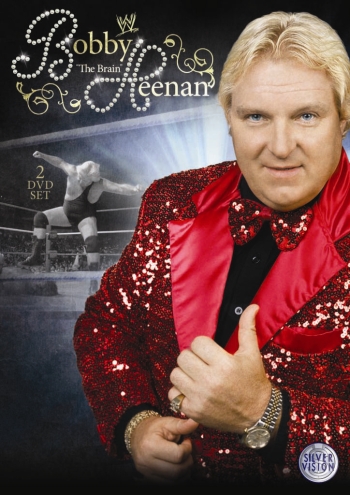 As you would expect, trying to cram around forty years of a successful career into a single DVD release was always going to leave a lot on the cutting room floor. Because of that, this set is rather incomplete, but you can hardly blame WWE for that; even if the main feature ran for five hours, a lot would be overlooked.

What we do have, however, is a fascinating look at the career of one of the most beloved men to ever grace the wrestling business, replete with archive footage from his runs in both the AWA and WWF, with comments from a variety of talking heads (those who worked with Heenan and some from the current era) about hot talented a man he truly was.

The man himself doesn’t speak on the DVD (most likely due to how weak he is now after his bouts with throat cancer), but both his wife and daughter reminisce about their husband/father and regale us with tales of Bobby growing up and what he was life away from the spotlight. Also touched upon was his amazing partnership with Gorilla Monsoon and you can clearly see how close as friends the two really were, with ad-libs and corpsing galore from Gorilla as Heenan zings out one-liners.

This is a wonderful look at a wonderful human being and there are few who deserve the accolade of “Legend” more than the greatest wrestling manager in the history of the business.

A tone of extras on the first disc, with the farewell to Gorilla Monsoon from Nitro (Bobby tries to keep it together, but visibly breaks down at the end of the segment in a very touching moment. It’s not shown on the DVD, but Heenan actually had to leave the booth he was so upset) and the Hall of Fame introduction are the stand-outs.

Disc 2 features some matches that Heenan competed in (the two Weasel Suit Matches are fun) and they show that he knew what he was doing as a wrestler as well, but it’s the last two matches with him solely on commentary that show how talented the guy really is.

It’s widely considered that the 1992 Royal Rumble is the best ever and a lot of that is down to the work of Bobby Heenan and Gorilla Monsoon on the mic. They worked so well together and with “The Brain” being firmly behind Ric Flair’s quest to win the WWF Championship, only to see “The Man” enter as #3, a complete story just on commentary unfolded as the match progressed.

As great as the Rumble match is, looking back at it now, it’s obvious that we, as fans, are actually being unfair to today’s product by saying there’s only a handful of top liners and the rest are midcarders of jobbers. Back in 1992, the same situation was taking place, although some of the lower-level guys had been upper-level guys in years gone by, so they maybe didn’t seem like they belonged in that bracket. Entrants in the 1992 match included Repo Man, The Berserker, El Matador, Skinner, Greg Valentine, Virgil, Shawn Michaels, Jerry Sags, Haku, Texas Tornado, Nikolai Volkoff, Jim Duggan, Jimmy Snuka, Col. Mustafa, Jim Duggan and The Warlord… all of whom, in 1992, where midcard at best.

The main reason it didn’t feel like they were jobbers or midcard players is because every single one of the men involved in the match, from curtain-jerkers to main-event talent, had something unique about them. They all had a distinguishable character, none of the would be mistaken for any of the others and the fans gave a damn about them all, either as someone to cheer or someone to boo.

That’s the difference between then and now and that’s why WWE really should pay attention to their own archives.

This collection is fantastic, even with so much left out and so much glossed over quickly. The section covering Heenan and Monsoon is worth buying for all on its own, with the extras being varied and plentiful being a brilliant bonus.

Pride of place goes to both the HoF induction and the 1992 Royal Rumble, both of which should be viewed by anyone and everyone who calls themselves a fan of professional wrestling.

Do yourself a favour and buy this thing as soon as you can. Hopefully, WWE will take that as a sign to release a second volume on the greatest manager of all time.