By Tony Cottam
WWE DVD Reviews
This page contains affiliate links. At no additional cost to you, we may earn a commission if you click through and make a purchase. Learn more

Take a trip back in time, to when collars were big, flares were bigger and managers were larger than life… 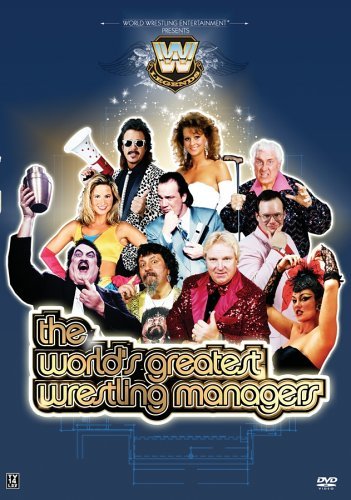 It might not seem it now, but Managers were once as vital a part of wrestling’s heritage as…well, as the ring ropes. Despite the presence of Todd Grisham presenting, this DVD aims to pay tribute to some of the premier managers in wrestling’s past. Think of a manager now, and you’d be hard pushed to name more than a handful, and half of those would be nothing more than just eye candy. Back in the day, as this DVD shows, managing was an art form all of it’s own.

Interspersed with many features about the women managers; managers that had careers as wrestlers; fightin’ managers; and the essential art of cheating with Theodore Long & Bobby Heenan are features on selected managers:

Starting by defining what a manager should be, the DVD is a pure nostalgia trip from start to finish. They’re all in there – from Slick, Jimmy Hart, Paul E. Dangerously and Bobby Heenan to Harvey Whippleman, Classy Freddy Blassie, Mr. Fuji and Bill Alfonso.

Delving into a few of the legendary names in managing, the disc takes a look at who they were, what they did, and how they became legends. Featuring testimonials from all of wrestling’s big names, and some guy called Hulk Hogan, it comes across how highly the managers featured are thought of.

For peeps that remember ‘back in the day’ like me, this is sheer escapism; a chance to relive some great memories from the past, but it also works for the newer fan – demonstrating what managing is REALLY about.

Weighing in at over 90 minutes, it’s a great feature piece, even allowing for the bumbling ineptitude of Todd Grisham, but it’s not finished there – it’s loaded with extras.

To start with, you can throw in three ‘manager matches’ – Lou Albano vs. Arnold Skaaland from 1977; Bobby Heenan vs. Greg Gagne in a ‘Weasel Suit Match’ from 1980 and Jim Cornette vs. Paul E. Dangerously in a ‘Tuxedo Match’ from 1989. If they’d added in the classic Beulah vs. Bill Alfonso match from ECW, it would have been nigh on perfect.

There’s also a ton of video clips, interviews, and more besides. From Macho Man and Elizabeth’s wedding video, to Fuji Vice, right up to Sunny sings Happy Birthday (wow, that woman had a fine pair of lungs) it covers a lot of the classic manager skits through the years. Again, only one thing is missing from this section that would have made it perfect – the music video that accompanied Slick’s entrance music “Jive Soul Bro”.

All in all, this is a superb package for anyone that does remember the managers of the past, or even anyone that wants to see what the fuss was about. My only gripe would be that the people interviewed don’t seem to know if it’s in kayfabe or not, and veer wildly between the two at any given time. If you don’t know what that means, then don’t worry, it won’t matter to you!

Go get it now!