Well, hello. It’s almost February, and that means 2 things. One – it’s bloody cold and windy (if you live in Scotland, like me, we call it summer weather) and two – you’ve no doubt watched The Royal Rumble. The Rumble is my favourite PPV of the year, It’s always full of drama, surprises, quality matches, and of course, the mandatory pointing to the WrestleMania sign.

This year’s instalment was no exception; Sheamus winning was totally out of left field, and the surprises? Awesome! All three announcers entering? Socko vs. Cobra? Road Dogg? Kharma? Kofi walking on his hands?? RICARDO RODRIGUEZ??? In future years, this will go down as one of my favourite Rumble matches ever, but in the meantime, given the title of the column, it won’t be a surprise to find out that I’ve taken a look back at my personal favourite moments from Royal Rumbles of the past. Let’s begin with… 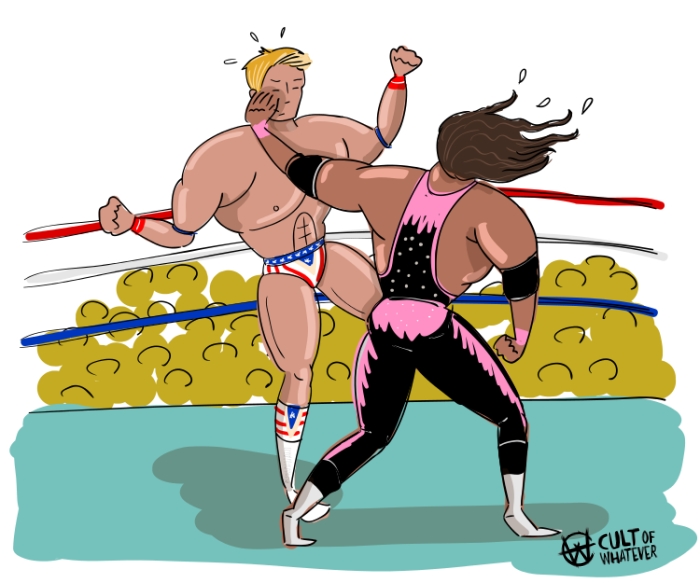 Picture the scene; Hogan is gone. The WWF needs a new Shiny Hero on top, someone to slay the evil foreigner Yokozuna and reclaim the gold in the name of all things right. On one hand, we have Bret Hart – reliable, solid, but kinda… y’know… small. Then there’s Lex Luger – who is built like brick outhouse, chiselled but is a bit flaky at times. Both guys are in the Rumble… who is going to ride the train to WrestleMania?

Well, both of them. In an amazing feat, both men went over the top rope and touched the floor AT THE SAME TIME! Two referees had two different views, and announced each man as the winner. The crowd cheered for their favourite (possibly Vince’s way of testing who was the most popular… who knows) and eventually, both men were declared the only ever Royal Rumble co-winners. 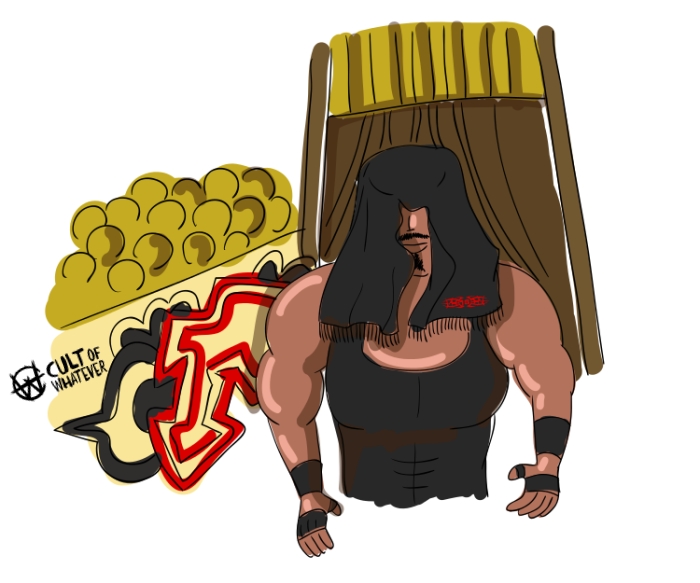 The mysterious orange 13 logo had been infecting TV shows for weeks leading up to the Rumble. Those “in the know” had an inkling that the orange and black meant that former ECW champion and all round ANGRY MAN Taz was on his way to the WWF. We didn’t know when… until Kurt Angle called out an open challenge at the Rumble in 2000.

The logo flashed, the heart monitor flatlined, and the Human Suplex Machine appeared. Stood in the entrance at MSG, the crowd chanted “We want Taz! We want Taz!”. Angle was on a strong run and had an undefeated streak going, but that came to a halt as Tazz (with his extra “z”) choked Angle out and became an instant hero.

Vince McMahon destroys his quads in 2005 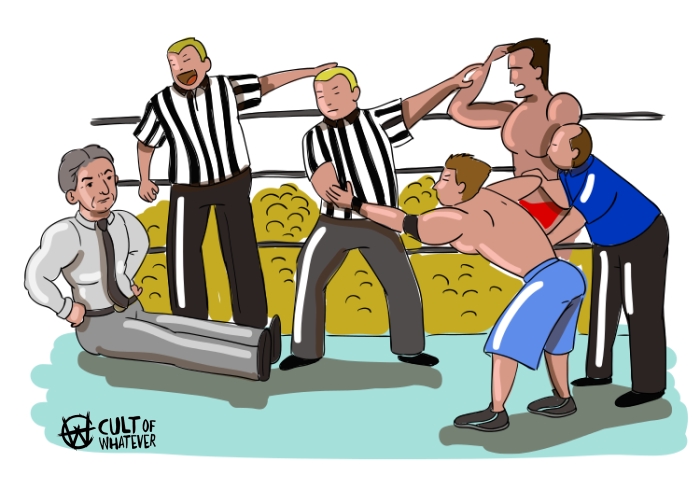 Only, he blew out both his quads as he slid into the ring. Not only that, because he’s VINCE McMAHON, DAMMIT he tried to stand up, fell back, and ended up delivering his decision while sat propped up against the bottom rope with Cena, Batista and a gaggle of refs wondering what the hell was going on. The match was restarted, Batista tossed Cena out, and Vince had surgery.

John Morrison auditions for Spider-Man in 2011 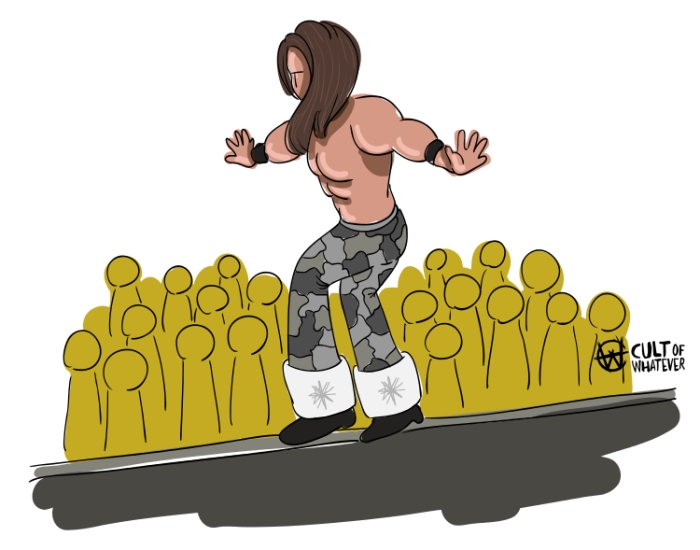 2011, and John Morrison is in the Rumble match, pretty much just treading water (something that would turn into a metaphor for his WWE tenure, eventually) until he ends up on the apron. William Regal shoves him, and that’s it. He’ll be eliminated, and he’ll wander off into the night, right? Except… that didn’t happen.

What happened was incredible; Morrison flew from the apron towards the floor, but he grabbed the barrier at ringside and clung on for dear life. He managed to swing himself up to the rail, tightrope walk along it, jump across the floor to the stairs, kick William Regal (who had himself been eliminated in the meantime) in the head, and return to the match. There was nothing like it before, and it undoubtedly inspired Kofi Kingston’s hand walk in this year’s Rumble. 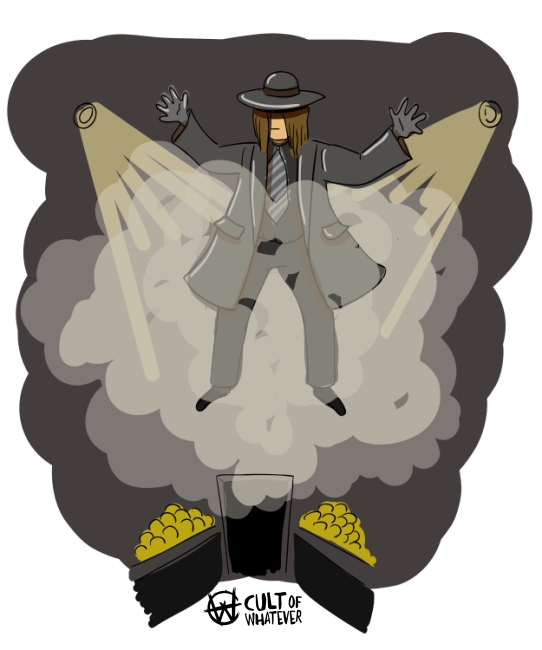 Taker was involved in a casket match with the EEEEEVIL Yokozuna and Mr. Fuji, being an EEEEEVIL genius, hired approximately 374 people to interfere on Yoko’s behalf. They didn’t help any, until someone stole The Urn from Paul Bearer, and opened it unleashing green smoke unto the arena. After that, ‘Taker was done and they bundled him into the casket and led him away. Or so they thought.

There was lights going out. There was smoke. There was a promo on the big screen FROM INSIDE THE CASKET delivered by the Undertaker about the spirit of mankind and eternal flames that cannot be extinguished. As if that wasn’t bizarre enough, on the screen, the casket exploded, Undertaker turned into a negative ghost of himself, and then rose off the screen, and they pulled Marty Jannetty (dressed as the Undertaker) to the heavens in a cloud of smoke and spotlights. 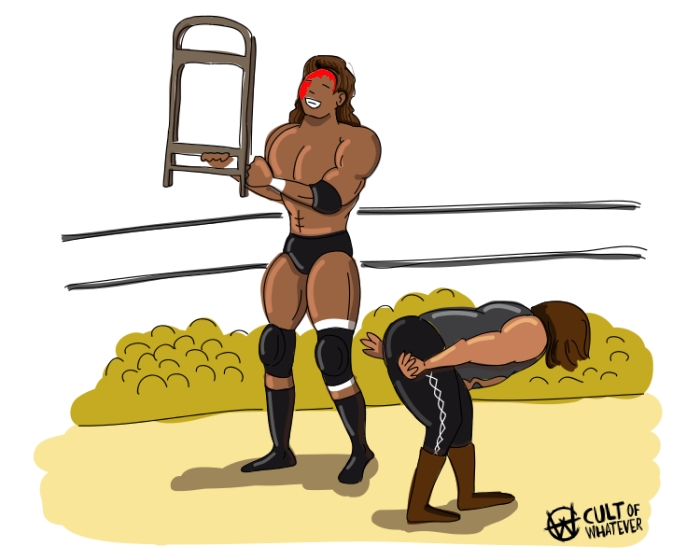 It remains to this day one of the greatest ever matches to take place at the Royal Rumble; one of the greatest matches to take place in the illustrious Madison Square Garden too for that matter. It was a street fight – shorthand for “let’s beat the living bejeebus out of each other using whatever’s handy” – between Triple H and the craziest of Mick Foley’s split personalities, Cactus Jack.

Nobody was really prepared for how insane the match would turn out to be. Chairshots and judicious usage of the announce tables was to be expected, and duly arrived. Few people expected barbed wire 2x4s, handcuffs and a bag of thumb tacks. How both men walked away from this war still amazes me to this day. 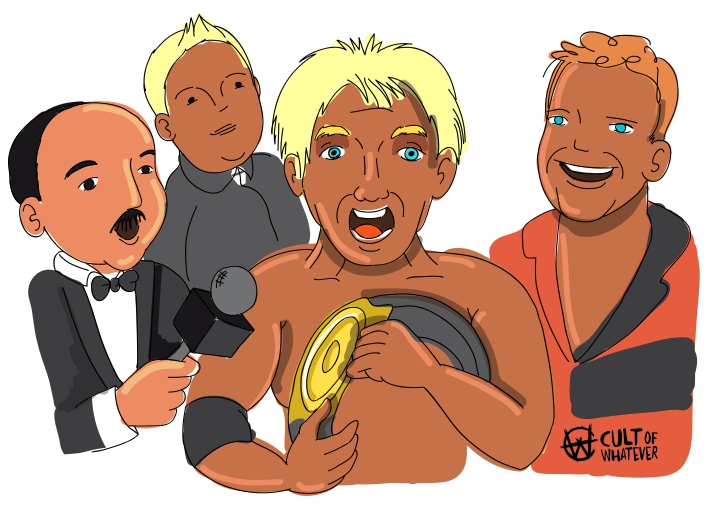 “To be the man, you gotta beat the man” was always Flair’s claim – and the Rumble in 1992 was positive proof of that. The title was vacant in the lead in to the Rumble, and it was declared by President Jack Tunney that the winner of the Rumble would also win the WWF Championship.

Flair entered at #3 – practically the kiss of death – and did what Flair does best: survived. Thanks to outside shenanigans with Hogan and Sid, Flair ended up winning the Rumble and becoming WWF Champion for the first time. Part of the joy of this match was Bobby The Brain on commentary absolutely delivering a master class in colour commentating the entire way. Best Rumble ever? I think so. 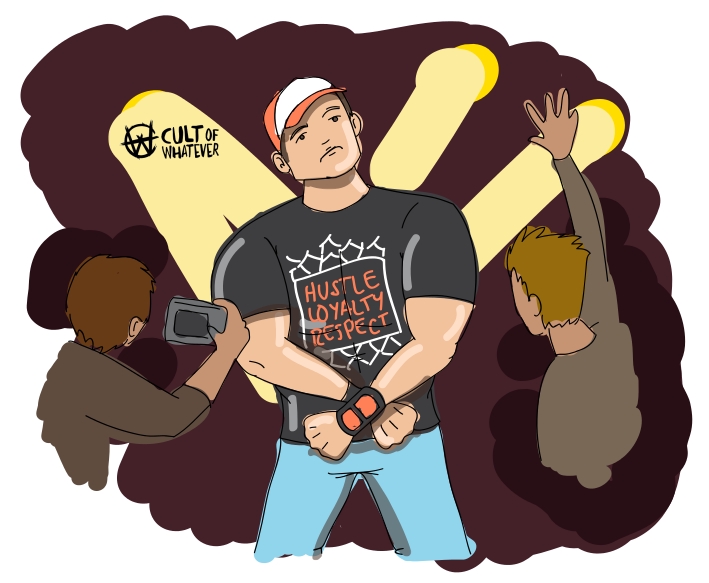 2008 rolled around, and the Rumble was at it’s spiritual home of Madison Square Garden again. Opening the Rumble match with Undertaker and Shawn Michaels at #1 and #2 after their classic show stealing end to last year’s Rumble match (see later in this very article) was one thing, but absolutely nobody was prepared for the end of the match.

#30 was a surprise. Literally, nobody knew who it was going to be. Turned out that it was John Cena, who was supposed to be out injured until long past WrestleMania – but it was an almighty work and fooled everyone. The roof lifted off MSG as Cena appeared at the entrance way and proceeded to clean house. It came down to Cena and HHH – and Cena dumped HHH over the top rope for the surprise win to end all surprise wins. 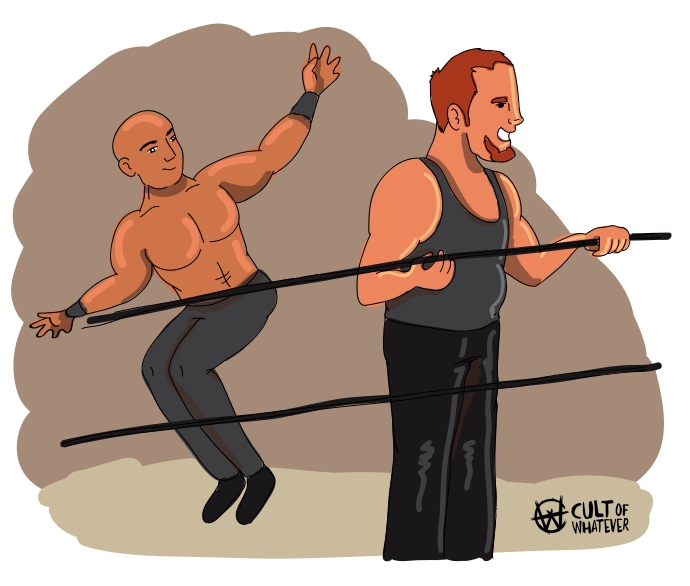 Undertaker – a veteran, seemingly invincible and one of the perennial favourites to win the Royal Rumble, without ever pulling it off. Maven Huffman – won Tough Enough, didn’t really do much else except have a picture perfect drop kick that Hardcore Holly would be proud of. When the two of them faced off in the Rumble in 2002, it looked horrifically one sided.

Once the Hardyz got involved, Maven managed to deliver that dropkick, and Taker went flying over the top rope and out. Nobody was more surprised than Maven himself, and the crowd went absolutely nuts… and then Maven realised what he’d actually done. And so did Taker… and there was a whuppin’ delivered on to poor Maven… Taker got back in, eliminated him, whupped him some more, and even took him to the concession stands for more whuppin’ before leaving, still dreaming of winning that elusive Rumble.

Undertaker vs. HBK steal the show in 2007 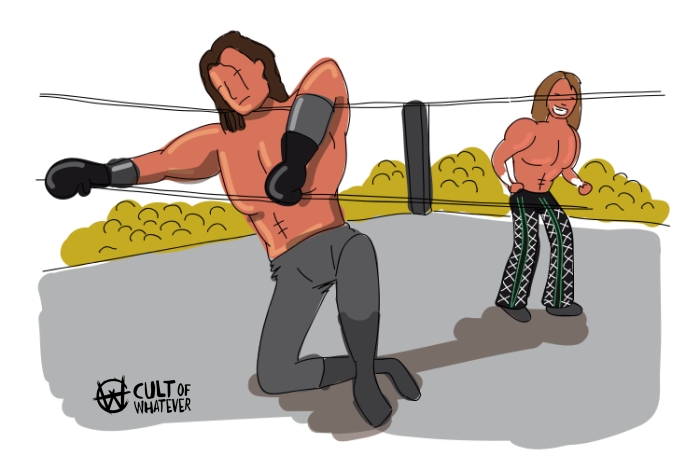 By the end of the 2007 Royal Rumble, it came down to just The Undertaker and Shawn Michaels. Two of the biggest names in the game. At this point, amazingly, Taker had never won the Rumble, Michaels was a two time winner and looking for the hat trick. With the Rumble on the line, the two men squared off.

What followed was poetry, as the two veterans put on a mini match that was as dramatic and tension filled as the whole Rumble before it. Undertaker would eventually emerge the winner, but the two would renew their battle at the very next Royal Rumble, drawing #1 and #2 and then more memorably at WrestleMania 25 and 26 in two incredible matches.

So there we go, my personal list of Rumbley goodness. I remember every single one as if it happened only yesterday… and who knows, maybe when I sit down to write a column like this again, some of this year’s incredible moments will be in the list? You’ll have to hang around to find out…

Until next time… have fun, go mad