When Mick Foley first released his autobiography ‘Have a Nice Day’ the immense success created a mini trend when wrestlers realised they make a quick buck from writing out their life story. Even in its dying days WCW picked up on the potential of this market and who better than one of their biggest stars, Goldberg, to test the waters… 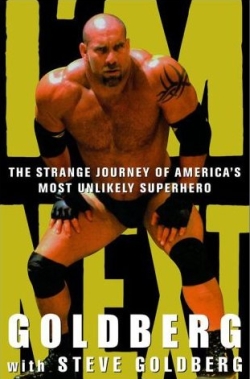 From what I’ve seen with wrestling autobiographies there are two types – anthology based and novel based. Novel based, like William Regal’s, flow continuously and retells one’s life story as a story. Anthology based autobiographies, like Batista’s, are just snippets of stories from their life that are half heartedly woven together and read like an interview. ‘I’m Next’ falls somewhere in the middle – there are subheading that divide the chapters which can disrupt the flow, but most chapters stay focused on the same subject. The chapters are excerpts from the people in Goldberg’s life, offering their opinions on the subject at hand and at times excerpts of the commentary from his matches. I’m not entirely convinced that his is a bad format for autobiographies but it left me feeling like I was reading a script for a documentary as opposed to an autobiography.

For some reason the book starts at the point when he decided to be a professional wrestler. Normally this wouldn’t be that odd, but he made the decision at 30 years of age. This isn’t the story of a young boy enamoured with wrestling, following heroes and striving to make it to the top – it’s about a guy who made the decision one day to be at the top of the wrestling business after he changed the channel on the TV. The story of Goldberg’s early life picks up about halfway through the book and includes a couple chapters written by his father and brother. These chapters about his early life are interesting but my interest waned during his chapters devoted to football. It’s not that they are poorly written; I only lost interest because I’m interested in Goldberg the wrestler and not Bill Goldberg the defensive tackle.

Goldberg is famous for being completely oblivious to the way the wrestling world works and this book exemplifies that. He does not seem to be involved with or care about any of the backstage politics, so for once this isn’t idle banter about who stabbed whose back. For example, in Chris Jericho’s autobiography he devotes an entire chapter about how this airhead Bill Goldberg screwed up his only chance at the top and it was an example of how the WCW management was going down in flames. By comparison, Goldberg devotes a short paragraph about how this upstart cruiserweight was trying to make a name for himself and how Goldberg may have taken his intentions the wrong way. It’s a refreshing change of pace to not hear about how everything in the wrestling world is messed up. There’s a truly heart-warming chapter about his work with the make a wish foundation with a depth of emotion to it that I haven’t seen any other wrestler produce.

If you were a fan of Goldberg in his heyday then I suggest this. It’s not the type of book that’ll light the world on fire but it’s an enjoyable little read that will keep you occupied for an afternoon. I think the point of this book was to show the human side of Goldberg to the legion of kids who idolized him, so it’s a bit out of date. I never followed Goldberg when he was at his height, but I enjoyed this and you might too.