By Clarkey
Wrestling Book Reviews
This page contains affiliate links. At no additional cost to you, we may earn a commission if you click through and make a purchase. Learn more

How long did it take you in your life to decide what you were put on this world for, and which profession you would undertake upon leaving the security of the family nest? Some would wager they still haven’t found the job to suit them and are still running on empty, toiling through their office job or flipping burgers at the nearest fast food joint until it comes along. Hard work and graft obviously plays a part and one must seek what they wish rather than sitting waiting for it, but sometimes that role does just bite you on the rear at the right moment. This leads to it dawning that the role was your true calling, leaving the rest of your time in the working world pretty much redundant. Batista Unleashed can be surmised in this vain, and is the candidly honest tale of the path that resulted in Dave Bautista finding himself within the wrestling world at the age of 30; coming into the industry late after a eventful life up until his big break. 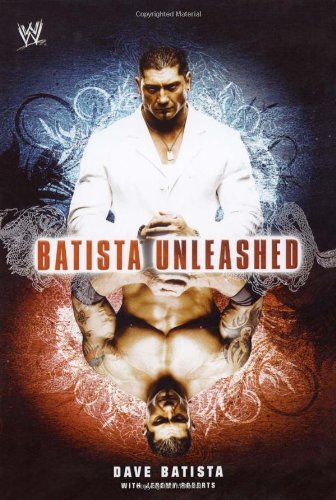 While not being a fan of the man’s work in ring (some would wager that he shouldn’t really have taken up the profession), it is tough not to enjoy the majority of the tales that have sprung up during the mans life that have been fed into this book and left me pleasantly surprised to feel a sense of respect towards the way in which what was essentially a womanising, bodybuilder with criminal convictions from the rough side of the tracks rose to get the dream job he didn’t realise he craved. It is this honesty that comes across that helps to get over the fact that Big Dave had a helping hand with his autobiography in a similar vein to certain others before, with the impression left that these were not the words of a ghost writer but of the man himself. Whether that is a kudos point to Jeremy Roberts, or to the honestly of Dave in the way he revealed his life perils raises a question mark, so I’ll let them share the plaudits. There is an early problem to raise though, and that is the decidedly straight to the point nature in which the stories have been presented leads to the sense of no emotion that can actually be reflected from the lack of personality that comes across in Dave’s ring work.

You do not quite feel the passion for the industry that one feels from reading the works of Mick Foley or Chris Jericho, and if it wasn’t for the fact that the stories are thoroughly entertaining it is remarkably tough to become emotionally attached to this book, leaving it simply as a journal of tales that thrill that doesn’t encourage further reads once you’ve slogged through the once. But with Dave coming so late it is hard to really knock him for this. In this way it is a shame that Dave has been so honest with what he has let out of the bag here, as extended upon (each story is split into little segments that total up to a chapter, with most barely covering a page in length) they would make entertaining and interesting reading across a series of books rather than this, which comes across as a Swiss Army Knife of road tales and antics that entertains in many little doses but as a whole is a tad swamped. Bringing him up again, but Mick Foley shared his tales in a much more informed way allowing the reader to become attached; but there in lies the other problem. While Dave’s upbringing and strive through different careers does lead to the attachment I mentioned earlier in the review, it doesn’t lead to the underdog support mentality attachment that the reader would feel towards a Foley because Dave’s build and look got him through the majority of the challenges that were presented towards him when he finally set upon wrestling as his chosen profession. With wrestling coming so late in his life, and his career still being short lived thus far it would have been a wiser move to save writing the book ten years down the line, but that is a beauty of hindsight. The extended focus upon his failed marriages were a toil to read through, but obviously it was a way for the big man to get everything out of his system by getting it on paper; but if he had waited and collected these tales as some sort of diary to base a future autobiography upon, we’d be graced with a good prospect for a great read.

The book is not a challenging read as you have probably gathered by now, and will fly by once you get a decent spot and time to give it a gander. Dave doesn’t really use the opportunity to get across any agendas or withheld views about his cohorts that could spring up to spice up an edition of the Wrestling Observer which is a disappointment from myself at least but does let one put on the cynical hat and see where his bread is buttered; and helps to show that Dave respects the way in which he has gotten his break as a big man rookie given his fast track to the top. Mentions towards many of his co-workers are made, and the deep respect from Dave towards those that have aided him on his way is gotten across but with enough humbleness that it doesn’t lead to a love in for those certain people that have been there at the right points to allow the fast track. When coupled with the obvious deep attachment to his late wife, it paints a far different picture to what many were lead to believe from various stories doing the rounds on the Internet, and the fake quotations that circled around the books release Stateside. Yes, the cynic would raise that this book is partly a project to present more of the nicer side of Dave Bautista to his fans and particularly to those blindly choosing to give the title a read, but it is tough as I said earlier not to feel a sense of respect for what the man has gone through (particularly in his early life) to then turn it around and become a huge star in a role he could not have really foreseen apart from the odd glance at the industry when partaking in bodybuilding.

So, essentially there is something here for everyone and a lot of it being unexpected. You are not going to get the thrilling experience of certain other autobiographies, but Dave hasn’t really had the wrestling side of his life throw up enough thus far to match what others have been able to put aside for a future book, let alone on paper for their current one. The real draw of this book is the tales in the build up, as you see the man work within various roles, see his family take unexpected turns in the form of his mother changing her sexual preference and the criminal convictions among other things; that entertain much more than the actual wrestling climax, which is mainly fan service. An enjoyable read if you hold back the reservations and give it a fair chance, but not the must have title for the Christmas stocking with certain other titles rearing their head. But then, the title was really for the fans and the fans will lap this up.