By Dante Spears
Wrestling Music CD Reviews
This page contains affiliate links. At no additional cost to you, we may earn a commission if you click through and make a purchase. Learn more

I’m back to take a look at the recently released CD; Voices: WWE The Music, Vol.9. The previous CDs have been surprisingly well compiled and some of the songs are my personal favourites. Will this latest offering be able to match the quality of the previous releases? 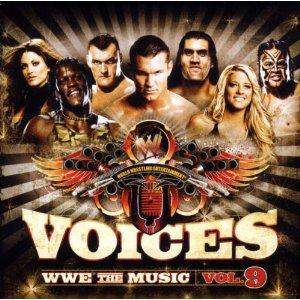 It’s your basic WWE CD release – entrance themes for their performers, and remix of older themes:

Given that Orton is the top heel in the WWE it’s fitting that his music is the first track. Burn in My Light, Orton’s previous music sounded like it was performed by a generic boy band and I was not sad to see it go. The change in music was welcomed because the song is quite good and a drastic improvement, but it subtly changed Orton’s persona from a character motivated by revenge to a psychotic sociopath. I was excited to get the CD only to find they ruined it with a completely arbitrary intro rift from Burn in My Light. It is neither used on TV nor does it even fit the rest of the song so it’s bewildering as to why they would include it. It’s a trivial annoyance, but it rather awkward and gets annoying to listen to.

Track 2 is Maryse’s entrance music and is the first of 3 multicultural songs (5 if you want to consider Umaga’s or Kung Fu Naki’s music multicultural). Makes me wonder why they gave the CD the subtitle “Voices” and not “World Tour” or something. But anyway, I honestly couldn’t think of a better theme for Maryse’s character. Once translated, the song is your standard Diva’s music, going on about the female body and how the singer in enamoured with how the female looks. Eve’s music, “She Looks Good” suffers from this problem as well, as do most Diva’s music as of late. Music can be used to great effect to supplement the personality of the Superstar, so when the divas have entrance music that just goes on about their looks, their personality is somewhat reflected into them just being a body. Maryse’s track gets away with this because it helps her stuck-up French personality.

Track 3, Man on Fire may stand apart as the worst track on the whole CD. I don’t know why they changed from Kane’s last theme which was a hell of a lot better than this generic graveyard theme. I can see the point of the song is to give Kane a “malevolent” feel, much like the Undertaker’s theme; however it utterly fails at this. In the right mindset, hearing the first bell chime during the Undertakers theme can send a chill down your back, whereas the only reaction I felt while listening to Man on Fire was one of boredom.

Just once I’d like to see the WWE have an Asian wrestler and not try to push ethnic barriers to the point of racism. The character of Kung Fu Naki doesn’t particularly push this barrier, his music certainly does. I don’t know who the artist is but he seems to be channelling the Afroman during this performance. But while listening to the song I somewhat begrudgingly enjoy it, despite its attempt to push the racial barrier.

Jumping down to R-Truth’s track, I have to say it’s terrible. Ron Killings is pretty decent on TV when walking through the crowd but it seems once you stick him in a recording studio he starts sounding like he has a sock jammed in his throat. There are also a lot of awkward pauses in his singing which makes the flow rather disjointed, and the song rough to listen to.

Being a fan of Indian music I can say that Khali’s song doesn’t do justice to the Indian music scene. It’s a decent song in its own right which is more then I can say for Kozlov’s theme. Kozlov’s theme sounds like a generic in-house track, which they picked up where a random Russian and had him threaten the microphone.

My only problem with the new Smackdown opener is that the artist has nowhere near the talent of Drowning Pool, Papa Roach or Brent Smith. I don’t know why they changed the theme from Rise Up, a much better song. It just doesn’t fit – WWE shows are much better suited for heavier music and this new track is just to light compared to Rise Up. The phrase that could be best used to describe “If You Rock Like Me” is “generic”. There’s nothing special about the song.

There’s not a lot I can say about the remaining two tracks. The WWE once again continues its proud tradition of completely botching music based off of ethnic characters. Umaga was suppose to be a Samoan Savage and while this music somewhat reflects his savage aspect; I feel the music is more reflective of the middle of the rainforest. The final track is that of the Orton lackeys, Team Priceless. I preferred the original version, but the new artist for the CD isn’t too bad. It’s a standard arrogant heel track – it goes on about how they are better then you or in this case how they are “Priceless” with a rather catchy tune and set of lyrics.

I suppose I might as well leave a mention of the bonus CD which contains the entrance themes of several WWE Legends. Now while it’s gratifying to hear tracks like the Ultimate Warrior’s entrance, which sounds like something out of an 80’s action film, what annoys me is the inclusion of the Stone Cold Steve Austin and The Rock’s entrance themes. The Rock and Austin were great wrestlers, but with the benefit of hindsight I’m sure we can agree that there was nothing special about their entrance music to warrant buying a CD with those tracks for the umpteenth time. There are numerous other entrance themes that have yet to be released on CD (my personal choice would be Ric Flair’s) original WWF theme) that could’ve been put on this CD, but instead of those tracks yet the WWE keeps trying to force them on us.

This CD doesn’t live up to its predecessors at all. This CD had a lot of potential – Voices was a hit among WWE fans and Ron Killings came off prior to this as being a decent singer, yet somehow in the production of the CD these songs just don’t reach the standard expected. But this CD is by no means bad; I’ve heard songs that were a lot worse. The best way to describe this CD is…average, so I suppose it deserves an average score.