By Adam Sibley
Wrestling Music CD Reviews
This page contains affiliate links. At no additional cost to you, we may earn a commission if you click through and make a purchase. Learn more

This week I got the chance to listen to the latest WWE music offering WWE Originals. This CD unlike most of the recent releases does not feature the theme music of your favourite superstars but instead it’s the wrestlers singing and rapping to new tracks which sum up their character. So we know the wrestlers can entertain in the ring but the question is can they entertain behind the mic? 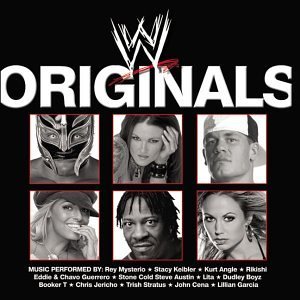 This release has a lot to live up to as one of the last WWE music releases was the awesome Anthology CD which has been given the status of one of the best CD’s the WWE has ever released. On the other hand the prospect of the latest offering may start the minds working back to the early 90s when the WWE last tried projects like this which included Slam-Jam, the superstars album and Hulk Hogan’s “Do you want to be in my gang.” These were all cringe worthy at the time but ten years on what has changed and can the WWE class of 2004 show them how it should be done?

The main high for me was the entertainment, listening to the CD in the car I laughed more than I have in ages and that wasn’t because of the quality of the music it was just because the wrestlers got so in to in to it and took it very seriously. Some of the songs weren’t the best but all the wrestlers performed them well which made them entertaining to listen to.

My favourite track on the CD is Kurt Angle – “I Don’t suck” it is the catchiest song on the CD and you will catch yourself singing along after the first listen. I think they should release that song as a single or at least have it for his theme music. Kurt has had the same basic theme music for some time which was used by many wrestlers before him and I think it would work well as the fans chant “you suck” to Kurt so the fans would still chant that but the music would be arguing back with them.

The DVD extra CD you get with the special edition is a brilliant addition to have and really makes the CD worth more than the £13.99 price tag must also mention now that SilverVision website currently has a special deal for a limited time where you get a 2004 WWE calendar thrown in all for the £13.99 asking price. The DVD extra has 30 minutes of the making of the CD which is a must have for the hardcore WWE fan.

The low point of the CD is that some wrestlers were just never meant to sing and a couple of songs are terrible. I am huge fan of Lita but didn’t listen much to her track or the Guerrero’s offering I much prefer their entrance music. Saying this though Lillian Garcia and John Cena showed natural talent and was quite surprised with how good Trish Stratus could sing, I’m starting to sound like a music critic..

As a Wrestling fan you will give the CD a chance and I think you will be presently surprised but to a non-wrestling fan, it will just be another reason to slate wrestling and make jokes about it because wrestlers aren’t singers but if you go in with an open mind I think you will enjoy it although I don’t see any future numbers ones coming from it.

I think it was brave of the WWE to try a project like this but you can only work with what you have got and not many wrestlers were destined to win Fame Academy or Pop Idol. Saying this though I think it was a very well produced CD and like the title says very original. Most of the superstars do a better job than you expect and really get their character into the songs through the singing and lyrics. This CD isn’t going to win a Grammy but it is a very entertaining listen and will brighten up any car journey.