Over the years, music in WW(F)E has changed dramatically. Some for the good, some for the bad. But all as big a part of wrestling growing up as anything else. So when WWE decided to put an entire collection of these songs together, I had to get it. Luckily, my caring boss had a copy and sent it to me, but on one condition: I had to review it. So was it worth it? The answer to that question is… 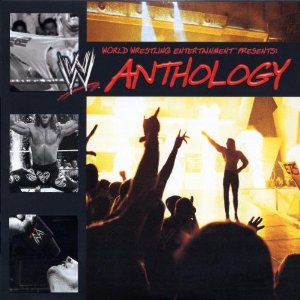 YES. I’ve been watching wrestling since 1990, and the music stems back to this era, which to me is excellent, as I can relive my childhood, thanks to the sounds of such classics as “Real American” and “Cool Cocky Bad”. As I evolved as a wrestling fan, wrestling evolved too, and so did the music. It’s all chronicled here and as there are so many songs, have had to be split into three sections. But I’m not complaining. It’s a great compilation of the classic songs from past and present.

The first CD is “The Federation Years”, and is a must for long-time wrestling fans. Songs here range from awful (The sappy Savage/Elizabeth wedding theme and Jesse James’ country song) to the ok (Nation of Domination and Jake Roberts) to the fantastic (Bret Hart, Hulk Hogan’s ‘Real American’ and my personal favourite, ‘Cool, Cocky, Bad’ for the Honky Tonk Man). 33 songs grace this CD, ranging from the late eighties/early nineties to around early ’97 time, just before the era of ‘Attitude’ took over the wrestling business. Some real corkers on here include Ultimate Warrior’s heavy rocking “Unstable” tune (wonder why they called it that), Shawn Michael’s “Sexy Boy” which you can’t help but prance around with your air guitar too (or is that just me?), and “It’s all about the Money”, belonging to “The Million Dollar Man” Ted DiBiase. Of course, songs such as Bertha Faye’s “Sweet Lovin’ Arms” and “Lex Express” let it down a bit, not too bad that the CD suffers majorly. This CD is great for remembering the “Good ol’ days” and is probably the best CD out of the three for that reason alone.

The second CD follows on from the last, being “The Attitude Years”, filled with songs from the era that changed Sports Entertainment forever. As this is the period where a lot of new fans were made, many may remember the collection of songs in this CD than the last. Gone were the cheesy songs of years ago (well, almost) as they were replaced by much more rocking themes. Some great songs on this CD include D’lo Brown’s “The Real Deal”, Kurt Angle’s “I Don’t Suck” (which has been edited to have a slower but more edgier sound) and Mr McMahon’s classic “No Chance in Hell”. But don’t think this CD doesn’t have some awful songs too. Like the previous CD, this one has it’s fair share too. “Ass man” sounded pretty cool at the time, but after listening to it over and over again in my Walkman, I realise how wrong I was. William Regal’s song was a great song, so what did WWE do? leave it out and use his “Real Man’s man” song from his Steven Regal days. What idiots. And Chyna’s “Who am I” theme contradicts itself as it says “Treat me for just who I am” yet previously states “Don’t treat me like a man”. But overall, the CD is another top-quality collection, with 35 songs sure to keep you head-banging (or horny, if you start listening to Mark Henry’s ‘Sexual Chocolate’) for a good hour at least.

The third and final CD is a collection of 18 songs from “Now”. Yet not all songs are wrestlers songs, as a few Pay-per-view tunes are included on here. Also, there aren’t as many songs as the other CD’s, but this isn’t a bad thing as there are a lot less poor songs on here. Torrie Wilson’s “Need a little time” and Reverend D-von’s “Eyes of Righteousness” are the only bad songs on the CD, although Stephanie McMahon’s “All Grown Up” comes very close. The rest of the songs range from passable to excellent. From “Eye of the Hurricane” to Christian’s extremely enjoyable “At last”, the songs on this CD will guarantee you humming and singing along wherever you are.

So what are the best songs in the compilation? I’ve chosen one song from each CD and even though it was a hard choice to make, these are my picks for the ones to listen to most:

CD 1: Hulk Hogan – Real American: The theme song of the wrestler who led the WWF to the pinnacle of success that it has achieved. The front man in the “Rock ‘n’ Wrestling” combination, this song is sure to have you jumping around, bopping your head up and down, singing along word for word. Warning – Some may even mark out for this song (Lord knows I did).

CD 2: D-Generation X – Break It Down: For a group to make such an impact on the wrestling industry, they need good wrestlers, cool catchphrases, a bad-ass attitude and great music. And what a great song this is. With a good drum and bass beat, as well as easy to remember words and a very addictive chorus “Break it down… *screech* D generation X”, this theme gives you no reason not to like it.

CD 3: HHH – The Game: This isn’t just my choice for the best song on the CD. This is my personal choice for Best Song on the entire Anthology. It’s a mix of the tune of HHH’s song that he used in 1999 and through-out 2000 with the words of Motorhead’s song (although there are a few changes) that he currently uses, sung by a band that seem unfamiliar to me. But it’s a fantastic song that I’m begging WWE to use. Great beat, strong words. Can’t get better than that.

So what are my views of the entire Anthology? In this writer’s opinion, it’s a must-have for all WWE fans. The collection of songs is great, although I’m surprised that a certain few are missing (How could you leave out the Demolition theme?) but that isn’t too big a problem as the majority of those chosen certainly make up for it. It’s shocking though to listen to all three CD’s, and witness just how much the wrestling business has changed in 15 years, in music alone. The contrast between the two is incredible, and yet in some ways, the cheesy gimmickness is still there. There’s also a difference in the fact that on the third CD, a lot of the songs are sung by people outside of the WWE (Lil’ Kim sings Trish Stratus’ theme, and Saliva contribute in a song on CD 2 and one on CD 3 as well). So the songs may sound a bit more professional. But no matter what the era, the songs all still do their part in reviving even the smallest memory in our wrestling brains. And because of this, no one can afford to not get WWE Anthology.