By Dante Spears
Wrestling Music CD Reviews
This page contains affiliate links. At no additional cost to you, we may earn a commission if you click through and make a purchase. Learn more

If there’s one thing from the WWE I always look forward to it’s their CD releases. For the most part the CD’s are beacons of excellent design containing an eclectic selection of music. What I love about the CD releases is that it gives lesser known bands a chance to showcase their talent and give them some exposure. The only real problem I’ve ever seen with these CD’s is that they take perfectly good songs and remix them horribly for no other reason than to fill space on the CD and then never use the remix on TV. 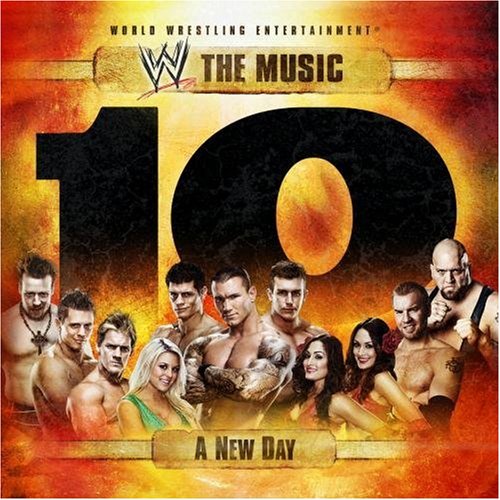 Reviewing a wrestling CD is always going to be difficult because unlike books which have clear cut factors that can determine their quality, music is completely subjective. Music can be screaming to incoherent guitar riffs and chances are you’ll still find someone who calls it a work of art. With that being said I figured I had to think up different way to look at this CD in order to keep the review interesting.

To start things off we have “A New Day” the entrance music for Cody Rhodes and Ted DiBiase, and only Cody Rhodes and Ted DiBiase. I’m determined to crowbar in the fact that Orton has never come out to this entrance music so there was no reason for him to appear so prominently on the cover art (as opposed to, oh say, the former WWE Champion Sheamus). Preaching aside, the song is quite good as is most of the music Adelitas Way produces. As for whether the song fits their characters is a bit knotty. The song promises that they are the New Generation which is all very true but neither Rhodes and DiBiase have done anything to step out of their the shadows of their fathers outside of “We’re their sons. We’re amazing and better than you”.

“I Am Perfection” is the music Dolph Ziggler and his hair use for their entrance and could be the perfect entrance music for a Mr. Perfect-type character. It could be but it isn’t. Unfortunately Dolph Ziggler has yet to showcase any narcissistic traits, so all we really have is the song telling us to think he loves himself.

Next we come to Miz’s new entrance music “I Came to Play” performed by a band I’ve never heard of which make it all the more interesting that this song is freaking awesome. This is a prime example of what I said about the best thing about WWE CD’s being that they take lesser known bands and showcasing their talent. Now this isn’t the original version, it’s a remix with the pitch changed around. As for whether or not it fits Miz’s character – well it promises that the opponent will be submissive and that the Miz is something great and for a heel you can’t ask for much more.

“Just Close Your Eyes”, the entrance music for Christian, is a graduate of the school of thought where lyrics have to make no sense whatsoever. Nonsensical lyrics aside this is one of the best songs I’ve ever heard and I had been patiently waiting for a full version ever since Christian grinned his way back onto ECW in February. If you’ve been paying attention you’ll notice this is a remix of his old theme by Waterproof Blonde and is one of the few times the WWE has improved a song when they remixed it. I don’t really know what the song has to do with Christian’s character, but I’m inclined to forgive this because the song is just that good.

I suppose a new era of his career warrants a remix of Bret’s old entrance music. “Return the Hitman” is the same song we all love, just with some new instrumentals mixed in. But it goes on for 5 and a half minutes, quickly running out of originality early on, turning into the same music over and over again. The Hart Dynasty music is the same thing – old song we all know, acceptably remixed. This does fit their characters considering they’re just the Hart Foundation minus all the success and a guy with a megaphone. But at least this track has the decency to not go for nearly six minutes.

Sheamus and Ezekiel Jackson – two wrestlers who are trying to come off as unstoppable monsters. Sheamus’s theme, “Written in my Face” while being a very good song raises the question of why an unstoppable monster heel cares about whether or not someone is lying. It’s music that would better suit a face, but considering it’s desperately trying to sound Irish and most Americans won’t know what real Irish music is suppose to sound like, I suppose it works. By comparison, “Domination”, a remix of the old Brawl for All music is a much more intimating and suited for a heel wrestler.

As for the themes for The Bella’s and Tiffany…well what can I say? They’re both the same, bland interchangeable songs about how the Divas are sex objects, sung by shrill harpy…things. I’ll be a generous person and say nothing more about it. While we’re on that, the less said about Primo’s theme the better.

“Born to Win” is a decent, fast paced song that rather predictably promises that Evan Bourne is born to win. This would mean so much more if Bourne wasn’ta perpetual jobber, but then again “Born to Job” doesn’t have the same ring to it.

When Curt Hawkins and Zack Ryder broke up I was initially disappointed partly because I felt they had missed a huge opportunity given their involvement with Edge and partly because I knew there would be no chance of hearing their awesome entrance music on TV again. And then Zack Ryder was repackaged and debuted on ECW with this entrance music and the old entrance music became a thing of the past. Christian once described Ryder as “the
tool from Long Island” and I must say this music certainly does fit with that description. I’ve honestly never heard anything like this – singing about driving around in a car with a love for radio, presented as if it was being played through radio. It’s a small effect, but quite an effective one.

And finally we come to “Crank the Walls Down”, the entrance music for Chris Jericho and the Big Show when they were still tag team partners. Some consider this song great; I consider it a rubbish song full of screaming trying to pass off as singing. At the very least it gets points for being an original recording as opposed to the WWE’s normal method of just mashing two songs together whenever two established wrestlers pair together as a tag team.

So all things considered this is an outstanding CD Release. It does trip a bit at some points but generally the songs are enjoyable. The previous few CD releases had bonus tracks and maybe  it’s because I had access to some of the full versions of the songs before the CD release, but I felt like this release didn’t really have as much content as it could have had. Where’s the new RAW, Smackdown and Superstars theme music? Where’s Vance Archer’s or Drew McIntyre’s new music? I guess I shouldn’t complain, I waited a whole year for some of these songs and I should be happy with what we finally got. If I can wait that long for this release, it won’t be hard to wait for WWE: The Music Vol. 11.