Think you know the demons that Eddie Guerrero had to overcome in his tumultuous life? Read this and think again… 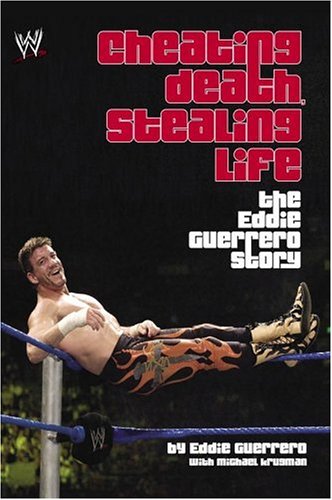 From the day he was born, Eddie was destined to become a wrestler. Son of the influential Gory Guerrero, Eddie’s childhood was steeped in wrestling stories – the good and the bad.

Right from page one, you can feel the respect that Eddie had for this business he loved so much. The love for his family dynasty drips from every word on every page. Unlike most WWE ghost-written autobiographies, Eddie’s story is uncompromisingly honest – brutal in some places, especially about his relationships with his family.

It’s elsewhere in Eddie’s life that his honesty is somewhat refreshing – at no point does he try and pardon his behaviour. He realises he made a mess of his life, and doesn’t seek your pity, or your sympathy for it. What does come across is how resilient Eddie was, and how much his family meant to him, as well as his love for God.

All through the book, Eddie’s talks about his relationship with God and how it changed through his years of partying, alcohol and substance abuse and even down to his separation from his wife, Vicki. In comparison to Shawn Michaels’ book, Eddie’s religious leanings are apparent from a very early age; through various crises in his life, his faith either tested him or saved him in his eyes, sometimes both at once.

From the death of his father, the death of his partner Art Barr, his miraculous survival from a horrific car crash, to his self inflicted overdoses and chronic alcoholism, it becomes apparent that the full extent of Eddie’s demons were never fully known to the world – making his recovery from them all the more inspiring and astounding.

His recounting of the incident that led to his dismissal from the WWE first time round leaves you in no doubt, that in his mind, he was at rock bottom, and had to change his life round if he was to survive. His subsequent return to the WWE and ascent to the WWE Championship provides a real high point at the end of the book.

For the wrestling aficionados, all the key points in his grappling career are covered, some in more detail than others. Not surprisingly, WCW gets a roundhouse kick of Eddie style honesty, with most of his bile reserved not for Eric Bischoff, but Kevin Nash.:

“Considering how little talent he had in the ring, Nash is one of the most arrogant people I’ve ever had the displeasure to know. He’d walk right past you and not acknowledge your presence unless he thought there was something he could get out of you.

I don’t say this lightly, but I genuinely feel that Nash is evil.”

It’s one of the few times that Eddie spoke badly of someone in the whole book, another refreshing change from most wrestler’s books – there’s precious little score settling done with other wrestlers.

In the end, what comes across is how little we knew about Eddie’s life. Sure, the drink and drugs problems were common knowledge, but the extent of his addiction is shocking in places; and it wasn’t just physically he struggled – financially, he was declared bankrupt; mentally, he nearly went insane; and most important to Eddie, he was torn apart emotionally.

Eddie’s recovery from all of this and more was a triumph. It’s just a shame that he was taken from us before he could fully be appreciated. His brother Chavo said that when he died, Eddie had finally made his peace with God, something that Eddie touches upon at the end of his book.

There’s more than a few times reading this that you feel the tears welling up in your eyes, but there’s more times when you crack a smile remembering just how damn entertaining Eddie was, and how good at his job he really was – for Eddie, the smiles would have made it all worthwhile.

In an industry where every flash in the pan is hailed as The Next Big Thing, and anyone that’s lasted more than 5 years is hailed as a superstar, the word ‘Legend’ is thrown about all too often. There are few people that could rightly claim that title and carry it without question. Eddie Guerrero was one of those people.

This is a must read for any fan of Eddie Guerrero, or even anyone remotely interested in wrestling. With a royalties going towards the family Eddie cherished so much, it’s a fitting tribute to one of the greats, and as a book, right up there with Mick Foley’s and Dynamite Kid’s as the best wrestling autobiography yet.