By Stephen Ashfield
WWE DVD Reviews
This page contains affiliate links. At no additional cost to you, we may earn a commission if you click through and make a purchase. Learn more

It can’t be easy putting on the first PPV after Wrestlemania. Talk about ‘after the Lord Mayor’s Show’. That’s definitely the case this year after all the massive hyping for Wrestlemania XX. But this Raw-only PPV isn’t that bad actually, there are two matches in particular that make this a compulsory purchase for your ever-growing collection. Another reason you have to buy this is that it wasn’t shown on Sky Sports. It was one of those PPV shows so I hadn’t actually seen it before watching the DVD. 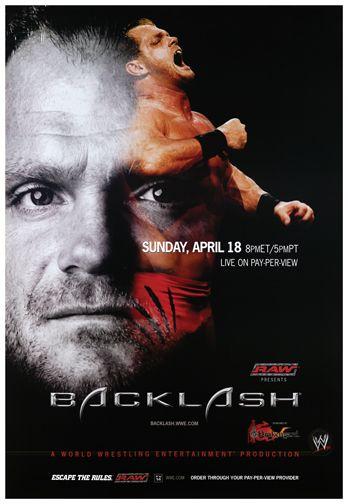 Main event was a rematch from Wrestlemania but with a twist. This time it wasn’t the emotional story of could Chris Benoit finally win ‘the big one’. This time around he was defending the belt in his own home town of Edmonton, the segments showing him coming home and it being announced Chris Benoit Day are brilliant. He defends the belt in a Triple Threat match against Shawn Michaels and Triple H. It’s as good as the Wrestlemania main event.

The other great match on this card is the Hardcore Inter-Continental Title match between Legend Killer Randy Orton and Mick Foley, in Cactus Jack mood. The promo for this match is outstanding, particularly when it comes to Foley. It’s really scary as he tells us how he’s looked back at his hardcore matches and wonders just what he might do to Orton. The fact he’s going to love whatever it is he does rams the point home. The match itself is high class, perhaps Foley’s best match in WWE apart from that Mind Games title match with Shawn Michaels and the infamous Hell in a Cell battle with The Undertaker. Foley very nearly closes the show but it’s Orton who takes most of the bumps including the thumbtacks! A great match.

Chris Jericho carries on his feud with Christian and Trish Stratus in a handicap match. Victoria defends her Women’s Title against Lita which is ok but face v face matches aren’t top of my wish list.

Shelton Benjamin was in the middle of a big push as he takes on Ric Flair in a good opener. Edge makes his comeback to take on Kane and the less said about La Resistance v Hurricane and Rosey the better. Surprise of the night is a decent performance by Jonathan Coachman as he take on Tajiri. That guy puts in a lot of work. Oh and there’s the moment Eugene wanders into the women’s dressing room to give us a first look at the surgery Gail Kim had just undergone. William Regal’s expressions are just fantastic.

Extra’s aren’t fantastic. There’s action from Heat you might have taped already, the promo’s are pretty good, the Mick Foley post-match interview is excellent and there’s Chris Benoit paying tribute to Stu Hart on the following day’s Raw.

This is definitely worth getting for the World and Inter-Continental Title matches.