By Adam Sibley
Video Game Reviews
This page contains affiliate links. At no additional cost to you, we may earn a commission if you click through and make a purchase. Learn more

Done everything there is to do on Smackdown “Here Comes The Pain”? Feeling the need for a new wrestling game? Well you don’t have to wait anymore as there is a completely new wrestling game on the market for Gamecube as WWE “Day of Reckoning” comes to a shop near you. Read on to find out why I have been keeping my friends Gamecube hostage since Wednesday. 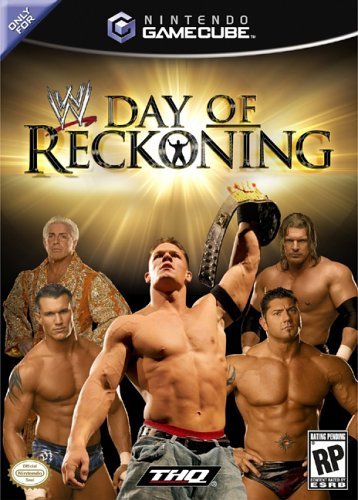 This week I had the pleasure of attending the press launch day for this latest offering from those guys down at THQ. During the day I was able to fully test the game and talk in length to a representative from THQ who talked through the new features, the planning and designing of the game and the hopes for the product as its released in the UK this week.

Now if you have been a Gamecube owner over the last few years you have been probably crossing your fingers hoping for THQ to bring the Smackdown series to Gamecube. This is especially after putting up with games which in all fairness have been better suited for Gameboy Advance over the last two years. Well the wait and patience has been worth the while as all your Christmases have come at once. No the Smackdown series has not been brought over to Gamecube but in my opinion a far superior game has been crated in “Day of Reckoning.”

Absolutely superb some of the best graphics I have seen in a wrestling game. The designers have found new dynamic lighting sources which means that the six packs and biceps those wrestlers are so proud of now look defined and less rounded so no more angry wrestlers knocking on THQ’s doors.

The crowd is now fully 3-D from the front row to the back and actually know what match they have come to watch as for all matches the crowd display wrestler specific signs for the wrestlers in the ring. 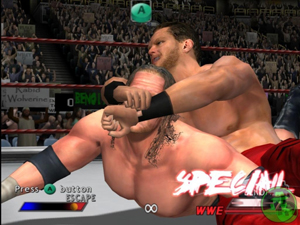 The wrestler likeliness has once again improved which is making the intros look more and more like animated film rather than just a computer game which makes then intros more fun to watch so you won’t find yourself stopping the intros half way through all the time.

If you’re into your loud rock or alternative music you will love the thumping soundtrack on this game. Yes that’s right because this game isn’t Raw or Smackdown specific you don’t have to sit through the agonising Raw or Smackdown music on loop when you’re selecting your game mode. The soundtrack reminded me a lot of the EA game series which can only be a good thing.

The in game sound is awesome as like the signs the crowd chants are now wrestler specific so you can ego trip as the crowd chant your wrestlers name as you beat the opponent into a bloody pulp.

The only slight letdown with the sound is due to not owning the license to some of the music for the legend characters. This means some of your favourite legends don’t come down to their signature music but this is only a little blip compared to all the improvements that have been made.

All you fans that have been begging THQ to bring over Smackdown to Gamecube will be happy as the gameplay closely mirrors that of the Smackdown series. The body pain system has been brought over so if your playing as Chris Benoit you can wear down your opponents head and arms so they are ready for the Crippler Crossface.

The game features strong and weak grapples which gives the game balance and makes the matches more true to TV. There is also a new submission system for you to get to grips with which is fun for you guys who like adding insult to injury by making your opponents tap out. 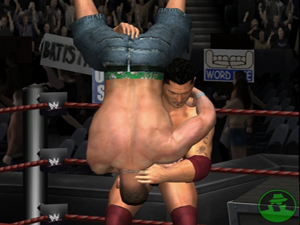 The most exciting new feature on the gameplay side is Momentum Shift. Now you always know when watching WWE on TV especially in the main events that wrestlers have the ability to somehow come back from the dead after looking out of it and ready to be pinned from nowhere they get a second wind, well that can now happen in the game.

During the demo day the representative from THQ was giving me a going over with John Cena delivering 4 straight finishers but I kept on bashing the a and b buttons and got my momentum shift. I got back up had the energy to cut in with a few power moves of my own and get the cheeky roll up victory with Eddie Guerrero as his slogan goes “He Lies, He, Cheats, He Steals.” So there is no more frustration for those getting a beating as you know you always have a chance as if I can beat one of the guys behind the game, anything can happen!

The Bra and Panties match has come across to this game which should keep the male fans happy as you get to rip the clothes off the likes of Stacy and Trish which would keep most red blooded men entertained for a while.

The new career mode which has been written by WWE writers is awesome as you no longer have to pick a recognised WWE character and following a pretty much pre-determined career based around the character on WWE TV. Yes that’s right you now start as a no named jobber for OVW as like most rising stars in the WWE and work your way through the ranks. As you move up the ladder you get a new image and build a character for yourself.

Whilst working your way through OVW to make your way to the big leagues of the WWE you learn the tools you need to survive with in the WWE. As you progress in OVW the Coach will ask you to finish matches in certain ways like two finishers or someone has just come back off leg injury so you have to work on the legs. This builds your all around game to take with you to the WWE.

As you are getting accustom to with wrestling games, you can grapple with your favourite stars of the past, in this game it includes the late great Andre the Giant, Roddy Piper, Bret Hart and more.

The new gameplay with momentum shift will make battling it out with friends fun for hours as no matter how much of a beating your friend is laying you it is still possible for you to wipe the smile off their face.

With the new unique career mode you never know what is going to happen next so when your mates aren’t around it will keep you entertained for months.

This is by far and away the best wrestling game I have ever played. This is the first game that has made me want to go out and by a Gamecube instead of borrowing my mates. If you don’t have a Gamecube go out and buy one so you can experience this game and if you already own a Gamecube you must have this game as it makes all those years of hurt finally worth it as the Gamecube has finally found its use.