AEW GRANDSLAM 2022 showcased the present and future of the promotion

This past week, All Elite Wrestling returned to New York City and the Arthur Ashe Stadium for what has already been pegged as the biggest annual week in the company. Last year’s Grand Slam event was a monster show, both in terms of card and ratings. It offered AEW fans the first look at Daniel Bryan in an AEW ring and essentially marked the ratings high point of the return of CM Punk to professional wrestling. The show did a monster number and, being the company’s first show in NYC, solidified the famous WWF/E market as more than a viable one for the rival promotion.

Last year’s show was the climax of a summer of momentum, with AEW signing some of the biggest names (present and up-and-coming) in the business, including but not limited to Adam Cole, Brian Danielson, and CM Punk. This year’s show, on the other hand, came at a time when the company was struggling to keep its feet set after several months of sub-million ratings, mild frustration from fans and wrestlers regarding the overstuffed roster and limited screentime for everyone, and—most recently—the CM Punk/Elite debacle at All Out earlier this month. Tony Khan and company did a stellar job turning the page and resetting the table for the past few weeks, and the result (plus the end of summer) has seen an uptick in the ratings. Grand Slam, as a result, is less about capping off a successful summer, and more about showcasing all that is still great about the still-young pro wrestling company. Those who wish to write the eulogy for AEW, or who want to compare them to a company like TNA/Impact, which was born a stagnant brand and remains one to this day, were silenced last week, as Grand Slam Dynamite and Rampage proved AEW is not just “still alive” but is “still trending upward.”

The two weekly shows both took place from Arthur Ashe, both carried the GrandSlam tagline, and both delivered two hours of content. On paper, this is the one week a year where the company’s A and B shows are presented as equals. And yet, watching the two back-to-back illustrates just how different they are. Dynamite is the show where the big boys play (look at the adjective: play). Sure, Rampage will often have one or two of the company’s biggest names working a match, but that actually proves the point: Those big names that work Rampage every now and then are the exception. The Wednesday night show is the showcase for the top stars. Friday night is for the fast-working, less-talking, superstars-to-be. GrandSlam didn’t change that.

Dynamite was a showcase of AEW’s biggest, best, and most important stars and moments.

JERICHO vs CASTAGNOLI – FOR THE ROH CHAMPIONSHIP 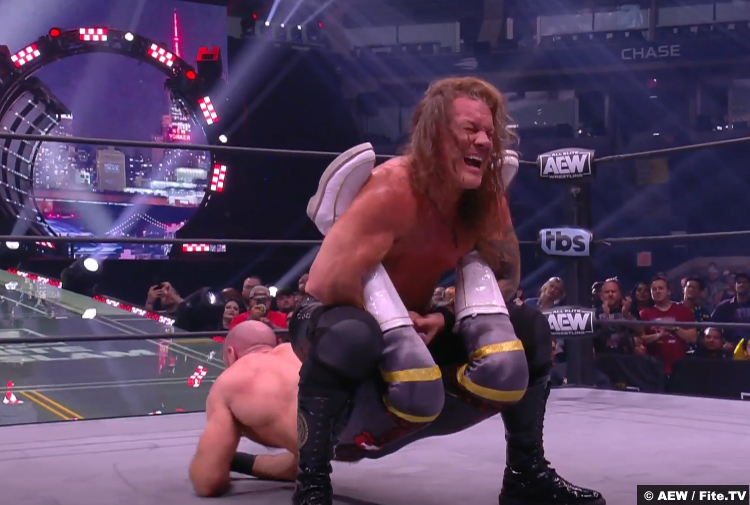 An excellent first match with a hot crowd (thanks to it being the first match). The finish was surprising in that not many expected Jericho to be a player with the ROH brand, but in hindsight, much like the main-event finish, it makes sense. Jericho and Moxley are, arguably, the two most important “first signees” in AEW, and when everything looked like it was about to implode earlier this month, it was those two who kept the ship steady. Giving Jericho a ROH Championship feels like a nice “thank you” for the work he’s done lately, not only in front of the camera, but as Tony Khan’s Pat Patterson-like confidant to the top booker. AEW is soon to start touring Canada as well, so that probably played a factor in the decision, and we might be getting closer to ROH getting a TV deal. It’s no coincidence that Jericho was the first AEW champ when Dynamite first hit the airwaves.

9/10 – The finish makes sense, and the match was excellent, too. 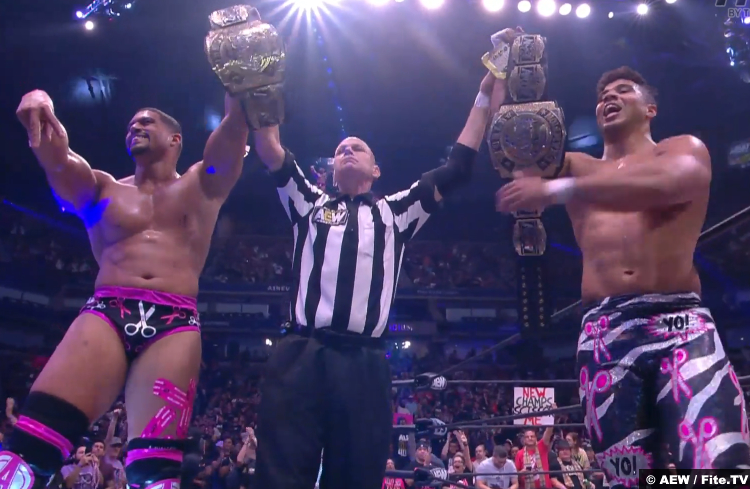 As silly as it was for anyone to suggest that Tony Khan call an audible mid-match at All Out, there was no denying that The Acclaimed were the most popular performers on the entire PPV and fans were more than ready to see them crowned as champs. In many ways, they’re one of AEW’s best home-grown success stories. They were a couple of nobody jobbers on Dark who paired up as a tag team, and slowly added layer upon layer to their personas until, this month, they stamped their mark as the company’s most popular act. Swerve in our Glory deserves a ton of credit too. They started out their short reign as babyfaces and ended them as de-facto heels. Where they go from here is still TBD, but in-ring, they proved again what everyone already knew: Swerve is silky smooth and a fantastic storyteller, and Keith Lee is Big Van Vader reborn.

9/10 – The match wasn’t as phenomenal as the All Out contest, but the finish made up for it in spades.

PAC vs ORANGE CASSIDY – FOR THE AEW ALL-ATLANTIC CHAMPIONSHIP

Unlike many pro wrestling fans, I don’t buy the “AEW has too many titles” narrative. It’s been clear from the beginning of the promotion that Tony Khan wants to bring more of a boxing/UFC vibe to AEW than what other pro wrestling company’s have. In that respect, AEW has a lot fewer titles than the average boxing/MMA fed. A title that is meant to be carried to overseas promotions is a genuinely clever idea, and putting it on the waist of a generational talent like Pac is a no-brainer. Having him face off against his biggest AEW rival was too. Pac and Orange Cassidy are Batman and Joker; I can watch their clashing styles go at it for years and never get tired of it. One day, maybe only for a very short time, those two will team up and it will be my favorite unexpected tag team ever. In the meantime, they can keep knocking heads to my satisfaction.

9/10 – An outstanding match as expected between these two. The finish was a foregone conclusion but how they got there was as entertaining as ever.

Yes, the women’s division is less exciting in AEW than the men’s. To be fair, there are fewer proven draws in women’s wrestling than in men’s and WWE has 90% of them under contract. Tony’s working with a much smaller arsenal than he is with male wrestlers. The addition of a workhorse like Athena has been great. The continued emergence of Toni Storm has too. Britt Baker remains the most well-rounded female superstar on the roster, though, but maybe that’ll change with the arrival of Saraya (the former Paige). Assuming she’s cleared to wrestle, she instantly becomes the best overall performer in the division. Assuming she’s cleared to wrestle, her signing can do for the women’s roster what signing Jon Moxley did for the men’s.

8/10 – A good match that was overshadowed by the post-match debut and the hope it brings.

JON MOXLEY vs BRIAN DANIELSON – FOR THE AEW WORLD CHAMPIONSHIP 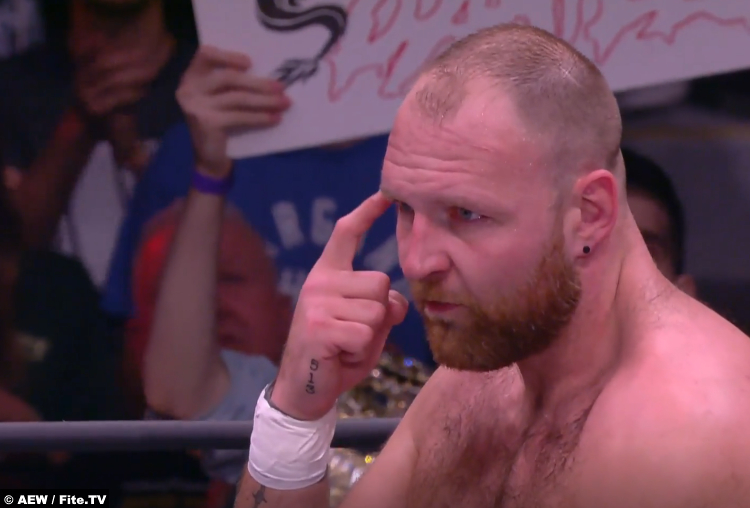 Like many, I wish Brian had won the title here, but I get why it went back to Mox. Danielson’s time will come, probably sooner than later. In the meantime, by winning his record-setting third AEW title, Mox has cemented himself as the company’s MVP, the Ace, and the number one guy they will go to whenever they need to steady the ship in a storm. He is AEW’s John Cena. He is AEW’s Ric Flair. He is AEW’s Hiroshi Tanahashi. In that case, the finish was almost a foregone conclusion. As expected, these two put on a masterpiece of an AEW main-event match. Nevertheless, MJF looms, and it won’t be long before the uncrowned champ wins the prize. Who better to pass the torch than the top-top guy in the promotion?

I have less to say about Rampage, other than to say it was exactly what I expected from a two-hour Rampage. That is, it was a two-hour Rampage; it wasn’t Dynamite Part 2. It retained the identity the one-hour show has been known for, albeit with an additional late-hour added on. Sting and Darby gave us hardcore mayhem, The Great @&#! Muta marked out the audience at home and in person. Eddie Kingston got his comeuppance on Sammy Gueverra in a fast-paced, hard-hitting match. Wardlow and Samoa Joe almost made me want to see them team up regularly going forward (AEW now has two tag divisions to support, after all). Fénix and Jungle Boy almost stole the show. Action Bronson and Hook I think did in fact steal the show (especially Bronson, doing his best impression of Bam Bam Bigelow). Hangman Page made sure we knew he was still a main-event level superstar by winning the battle royal and setting himself up for a title match in Cincy vs the champ. 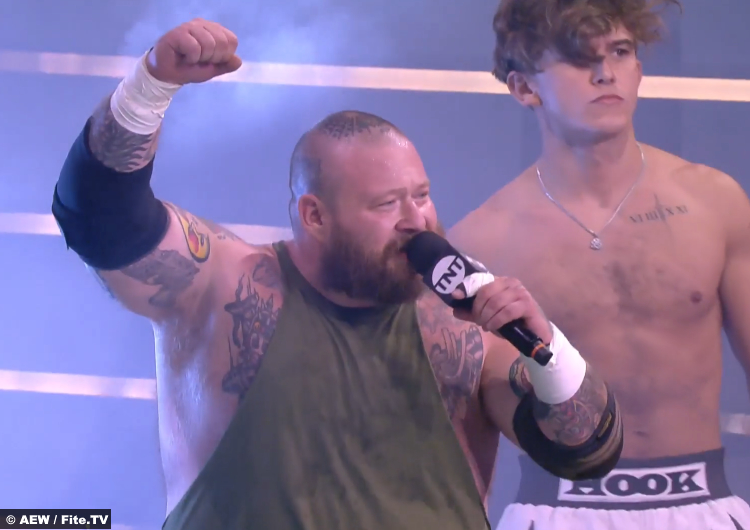 But the real star of the show was Ricky Starks.

Powerhouse Hobbs should not be overlooked; it takes two to tango, after all, but Starks—in my opinion—cemented himself as the next-next world title contender/champion. He came into this match “the future.” I think he leaves it “the present.” He has everything you want in a promotion’s top babyface. He’s got the look, the natural charisma, the mic skills, the in-ring talent, and even a signature pose/taunt to get the crowd popping before hitting his finisher. He doesn’t just resemble The Rock circa 1998, he feels like a guy who could become AEW’s version of The Rock. The iron is getting hotter and hotter. It might be time to strike.

9/10 – Rampage overall was a fast-paced, action-packed show, exactly as it should be every week. 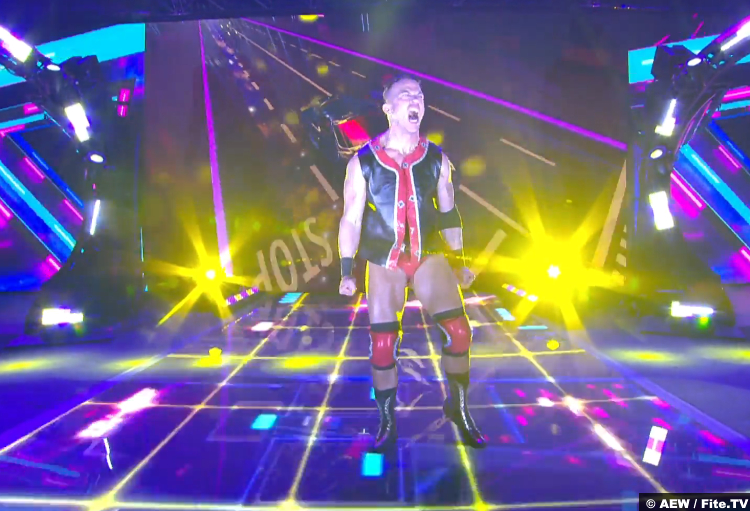 Overall, Grand Slam II was presented with a bit more uncertainty for the company than last year’s debut event, but kudos to TK and everyone there: They rose to the challenge and put on a fantastic pair of shows. The All Out Fallout is now a distant memory. AEW is fine. They’re going to be better than fine. They’ve got superstars coming out of their ears and, if these two shows prove anything, it’s that they also have no shortage of superstars-to-be, either. 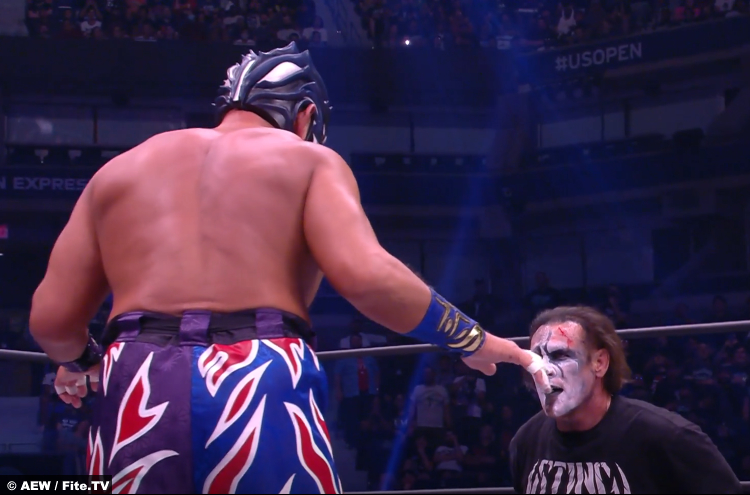