The Orville’s third season is nearing its conclusion. What comes next is still unknown. The show may end ultimately. It may go on hiatus. It may immediately go into production for the fourth season. That last one’s unlikely. If a fourth season was immediately on the way we’d already be hearing about contracts being signed, writing being done, and preproduction being set up. Instead, it’s a lot of vague, indecisive statements regarding the show’s future.

I hope it comes back. While I think the snappy 45-minute runtimes of season two were the show’s peak (so far), I still have loved year three overall. There has only been a single clunker episode, one misfire, and the rest have been either good, very good, or outstanding. Depending on how the season ends, it’s neck-and-neck between it and Strange New Worlds for my favorite sci-fi show on TV this year. 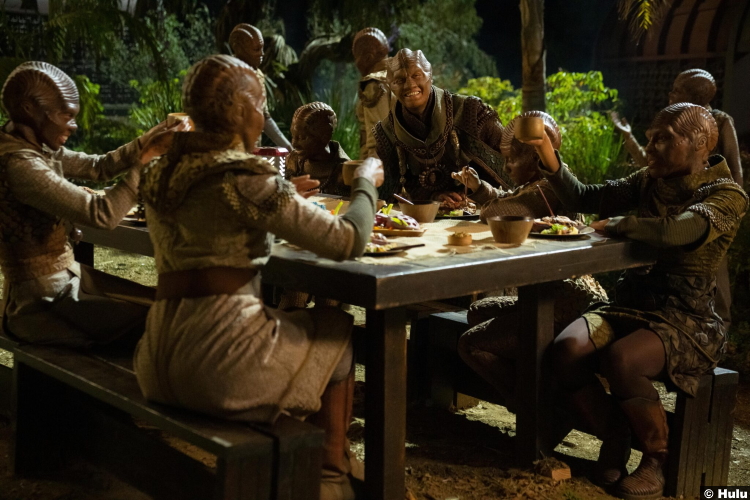 Serving not only as the follow-up to episode 4’s “A Tale of Two Topas,” Midnight Blue also takes us back to the Mochlan sanctuary planet last seen in season two’s “Sanctuary.” As a result, we are reunited with Haveena, the female revolutionary operating an underground railroad of sorts for Mochlan females. As has become the standard with Orville storytelling (more on that in a bit), we’re brought into the story’s next, logical follow-up chapter, as Mochlan extremists (also known as every Mochlan not named Bortus) discover Haveena’s attempts to restart her underground railroad (after agreeing to stop as a condition to have the Sanctuary) using Topa as an intermediary between Haveena and females on the Mochlan homeworld. The result is an episode with a lot going on, a lot of secrets and revelations, a lot of character development, and a lot of action set-pieces, all distributed in a feature-length format.

The episode is not, however, written like a movie. It isn’t paced like a movie, nor is it edited like one. Instead, it felt more like a TNG-era season finale/premiere two-parter, albeit one that is shown back-to-back without a three-month wait in between installments. The Dolly Parton scene was delightful, not only as a showcase for the music legend but in a way that worked naturally in the context of the story. If this had been a traditional two-parter, it would have made a good (albeit not very cliffhangery) end to part one. 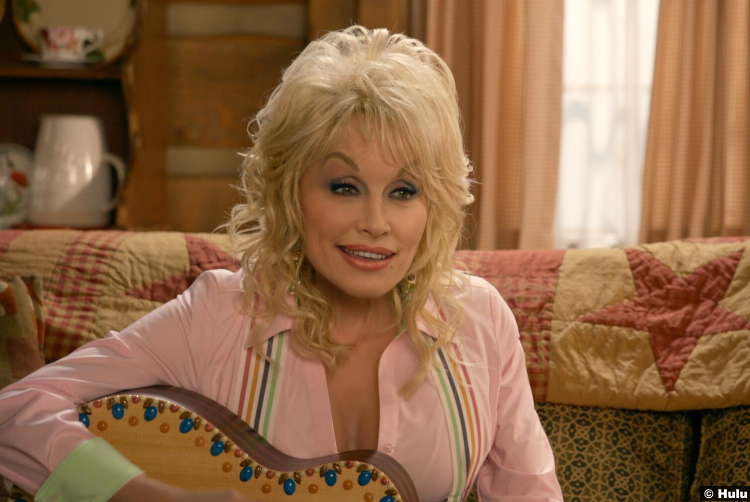 The second half, in particular, felt like a TNG second part/season premiere, in that it wasn’t as good as the first half, and had more set pieces than story, but it tied up the hanging threads and never sagged despite its length. The whole of it was great, occasionally it was outstanding, but it wasn’t perfect. I did enjoy the show’s willingness to turn a beloved side character like Haveena into more of a shade of grey. It made sense, too, that someone in her position would be tempted to compromise morally and play the ends justify the means game in her attempts to do what is right. Had the show spent as much time on the character development/drama in the second half as it did in the first, this would have gotten perfect marks. Instead, it falls just short.

9/10 – Midnight Blue feels like a two-parter that’s been stitched together. Had it been separated into the more traditional 45-minute runtimes, the first half would have gotten a perfect 10 and the second a very good 8. 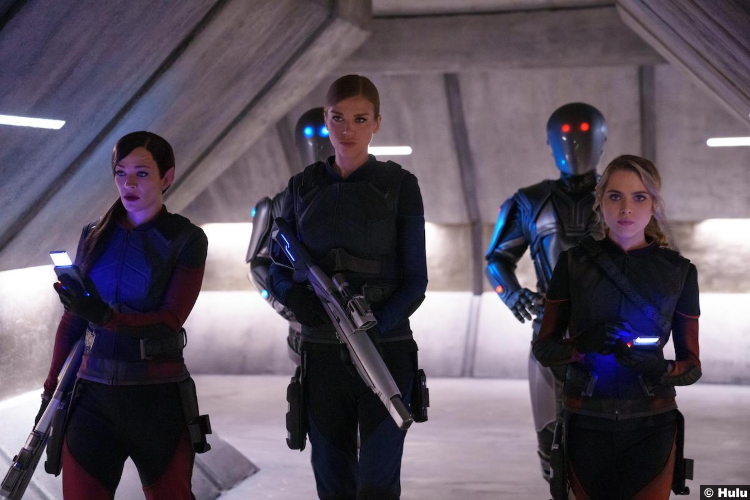 My problem with the previous episode was that it was feature-length but not written or paced like a feature. Domino, on the other hand, feels like an Orville movie, albeit one that lacks the stand-alone quality of a typical film. This is more like a made-for-TV movie that takes place at the end of a season, one that shakes up the established storylines and promises to take things in newer, more complicated directions going forward.

My only issue with it, however, is how convoluted it was with its storytelling to enact those shakeups. The first act is easily the strongest, as we witness the Mochlans and Krill enter into an uneasy alliance. They have little in common other than a common enemy and a belief that they will die separately and survive together. As the episode itself alludes, it’s akin to the Soviet-Nazi pact at the beginning of the second World War. Speaking of WWII, the Union has developed a weapon that can essentially mass-murder Kalon with the push of a button. It parallels the development o the atomic bomb and the political implications and ramifications that followed. The difference between the Kaylon killer and the A-bomb, however, is that the former weapon is only effective against the artificial lifeforms. The Krill/Mochlan alliance steal the weapon but it’s no danger to the Union (unlike when the Rosenberg’s gave the Soviets the Bomb).

The alliance wants to wipe out the Kaylon and the Union doesn’t, seeing such an act as genocide. So far this all makes sense, but things go off the rails when the Union proposes an alliance with the Kaylon to get the weapon back, and the Kaylon agree. Of course they agree; they want the weapon for themselves so they can reverse-engineer a counter-measure. It makes no sense that the Union would bend over backward to take out an alliance of Mochlans (an ally as of a week ago) and Krill (a would-be ally as of a month ago) to help save the lives of the Kaylon (an enemy bent on their destruction as of ten minutes ago). There are some mental gymnastics offered in defense of the character’s actions but at the end of the day the whole thing just comes off as convoluted, and the fact that it all works out (seemingly) comes off as contrived. 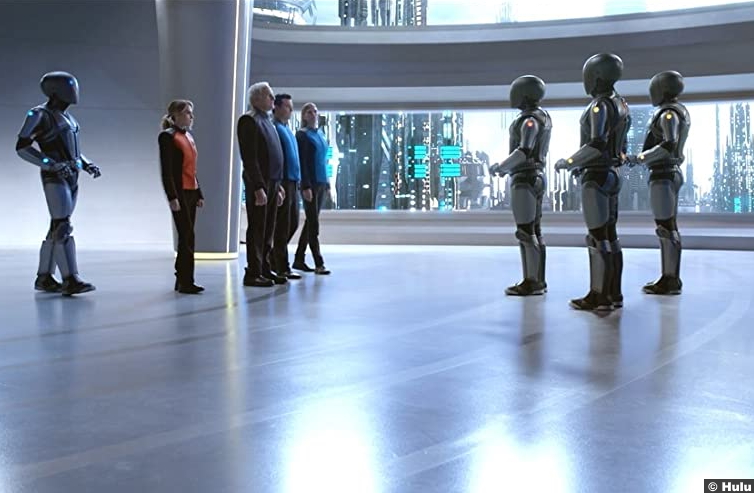 Everything culminates in the sacrificial death of Ensign Charly who, up to five minutes before her death, was ready to push the button herself and kill all the Kaylon. The fact that she only just got over her hatred of Isaac made her noble sacrifice to save the entire Kaylon race ring a bit hollow. It doesn’t help that this climax happens after a good 40 minutes of Star Wars-esque set-piece action “stuff,” eschewing the Star Trek-esque political drama and moral debating that dominated the (much better) first half.

I enjoyed the episode despite its flaws and I’m very intrigued to see where everything goes from here, but I can’t give “Domino” too high marks with all the little things in the storytelling that rubbed me the wrong way.

8/10 – Domino is an epic Orville made-for-TV movie that suffers a bit under the weight of the story it tried to tell. 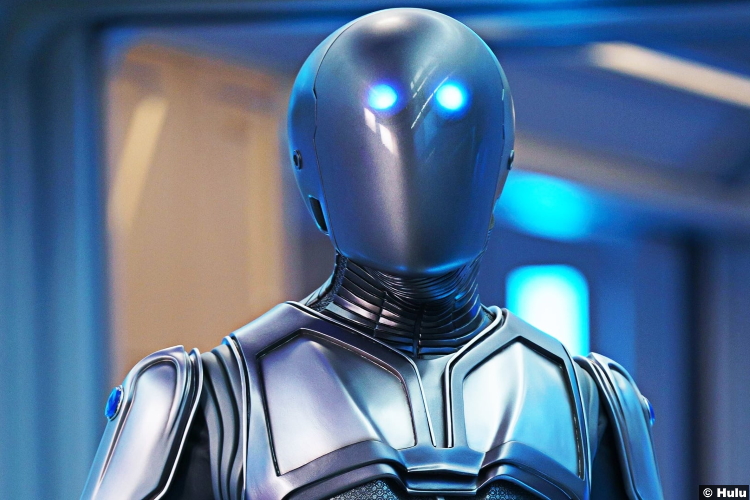 I love the way this show balances its serialized story elements and its episodic format.

Every week is a new adventure, but usually the adventure is a continuation of a storyline from a few weeks prior. There are like four or five storylines happening on this show and the writers bounce between them as needed, returning to them every few weeks to give us the next, logical, chapter in the story. Everything is familiar, but never repetitive. The show manages to strike a better balance between long-form and weekly storytelling than even DS9 or X-Files (shows that had more of a “one or the other” approach, where an episode was either “lore-heavy” or “stand-alone”).

The writing here isn’t as consistently strong as on DS9 but the balance is better.

There is one more episode left and with so many storylines climaxing and going to a new level this week, there’s no telling what the last episode of the season will hold. I’m excited to find out…