REVIEW: “NOPE” wants to be more than it is, which is just good enough

With just three movies under his belt, Jordan Peele has solidified himself as a rare thing in Hollywood these days: A “name” director. There are precious few men and women working behind the camera who can command an audience’s interest with just their name atop the poster, but Peele is one of them. Whenever a director like that clicks with me, I make it a point not only to see whatever they release but to see it with as few spoilers as possible. In the case of NOPE, I saw the initial teaser and avoided everything else like the plague.

Likewise, with just three movies under his belt, Peele has established a template for the kinds of films he revels in making. They are heavy in subtext, coated with a layer of horror. If you’re not interested in the “message,” he won’t beat you over the head with it. If you want to dig deeper into the meaning of the movie, you could probably spend a couple of hours just talking out everything he was trying to tell us in his films.

His first major release, Get Out, wrapped a fun thriller around a story about white liberal hypocrisy. The result was one of the tightest, sharpest screenplays put to film that year, and one of the best thrillers released this millennium. The follow-up, Us, was clunkier, to say the least. My initial rating was 10/10 but in hindsight, there are numerous structural flaws in the storytelling and a ton of plot contrivances. You can think as long and as deep as you want about Get Out, you won’t find any loose threads that would unravel the picture. With Us, you barely have to dig under the surface before the whole foundation of the story starts to unravel, making you say “wait, so why…” and “but wait, does that mean…” It’s still a fantastic feature, though, especially on the surface, and with the subtextual message he tells with it.

Now comes NOPE, a movie that, based solely on its initial teaser, promised some kind of an alien invasion/abduction story. That’s the text. That’s the surface-level story at work. With Peele, that part is almost guaranteed to entertain. The question is: Does the subtext get its point across, and does it do it in a way that doesn’t strain so much credulity the whole thing snaps in two? Answer: Yes, the subtext works, and no, there are no plot contrivances that collapse the narrative. 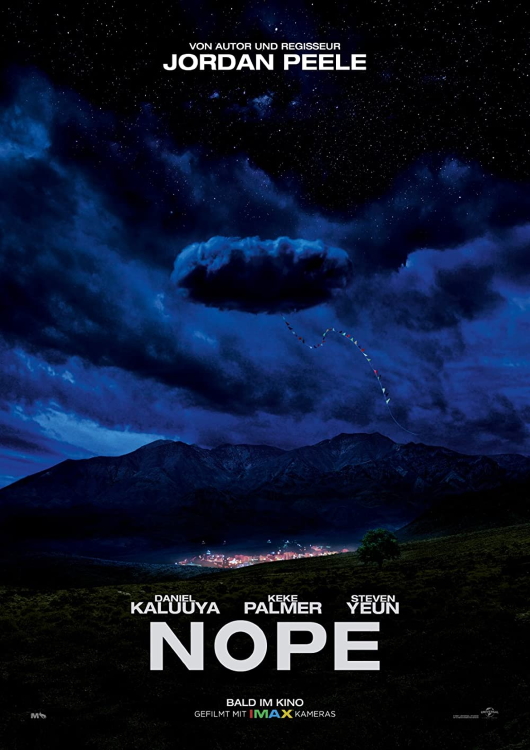 Surprisingly, my biggest problem with NOPE is that the surface-level story is what’s lacking.

Let’s start with the subtext, as it was, I suspect, what the film’s author started with (and then crafted the sci-fi/horror story around it). Black people have been involved in the motion picture industry from the beginning, a point expressly told to us in the film’s opening minutes. And yet, despite how much “skin in the game” African Americans had/have, their accomplishments and, more importantly, key contributions to the birth and growth of the medium, are mostly ignored. They are used, but not honored. They are everywhere, but not seen. A black person was one of (the movie claims the) first people ever filmed in a motion picture format and yet, the history of cinema is lily white until sometime around the rise of Sidney Poitier. Sure there are actors and actresses like Gone with the Wind’s Hattie McDaniel, and To Kill a Mockingbird’s Brock Peters, but they played second fiddle to the likes of Clark Gable and Gregory Peck. 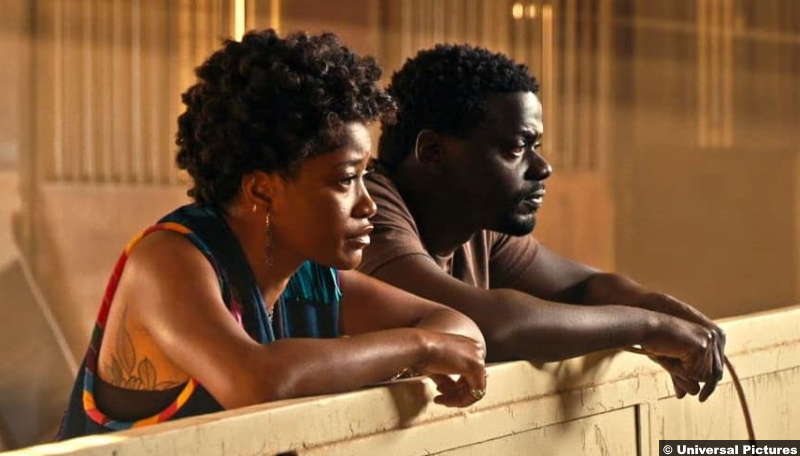 The movie begins with Oj and Emerald, the apocryphal great-great-great-great grandchildren of the supposed-first man ever filmed (a black jockey riding a horse), who operate a horse training ranch a few miles north of Hollywood. In reality, there actually was a black jokey captured in one of the first motion picture film reels, but no one knows who he was. In fact, that’s the movie’s point. We know who invented motion picture technology (the Lumière Brothers) and we know who built Hollywood (Jack Warner; I’m only half-joking), but no one knows the name of the first movie star. In an industry built on movie stars, who treat them as veritable idols, isn’t that an amazing omission? No one knows who was in the first motion picture! Why? You know why.

How? How else but with a UFO story! 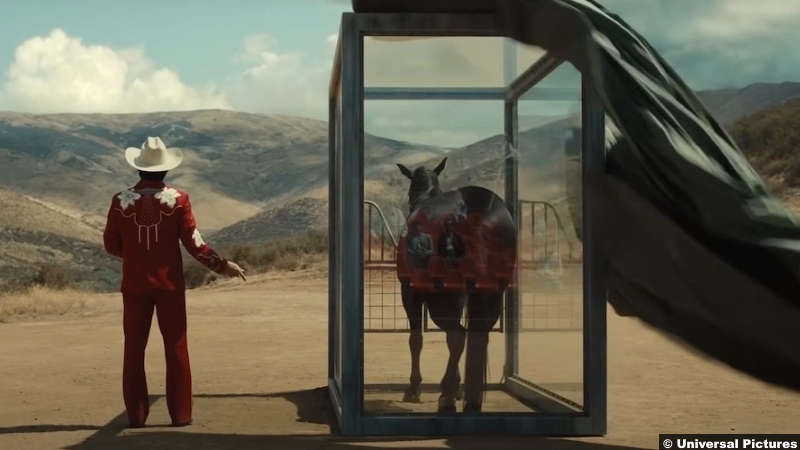 The twist, and it’s a clever one, is that the UFO in question is not a ship carrying little green men, but is instead a living animal, hunting people. The alien has marked OJ’s horse farm as its territory and is hunting his herd like an owl hunting mice, only this owl is as big as a football field. The predator looks like a traditional 1950s flying saucer; it’s silver with a big hole in the bottom for sucking up people and horses on earth, and it hovers around without an obvious engine or propellor in sight. The more we see of it, however, the more it resembles something akin to a balloon. At first, it hunts only at night, providing for some early frightful moments. As the story progresses and OJ and Emerald begin to “hunt” the alien, Peele grows confident enough to shoot the action in broad daylight, a welcome change of pace for most horror films.

Tying in with the subtext of the story, the goal of the main characters is not to hunt and “kill” the creature, but instead to capture it on film. They want to be the first ones to provide indisputable proof of alien activity on earth. They want to make motion picture history, in other words. In the climactic moment, it appears as though cinema history will be made, not by either OJ or Emerald, but by the eccentric, white documentarian brought onto the ranch to help. But when he gets sucked into the alien’s belly, it’s up to the stars of this movie to save the day, which is done in the most delightful way possible: Emerald hand-cranks an old carnival game that takes a picture from the bottom of a well, looking upright. She takes half a dozen shots, each capturing a single image which, when put in sequence (to make a “motion” picture, if you well), shows the flight and forms of the alien menace.

Mission accomplished, history is made, and the movie ends.

In terms of telling its subtextual story, I give NOPE high marks. My only problem is the very slow and deliberate pace it takes from one scene to the next. It feels like a movie that wants to be bigger and more grandiose than it is. With some tighter, snappier editing this could have been an excellent film. Instead, it’s only a good one. There are a few good scares, a few beautiful shots, and a well-told story in the subtext, but on the surface, the film is just okay.

8/10 – NOPE is not Jordan Peele’s best work, but it is his third film in a row to illustrate how in command he is of a multi-layered story. I just wish the top layer of this one had been a bit more exciting.