History is filled with important dates and milestone moments on the calendar. Wrestling history is no exception. Twenty years ago, this past May, featured a date with not just one important historical occurrence, but multiple. The date was Monday, May 21, 2001, and it was arguably the most WWF-altering day that no one really talks about.

The site was the Compaq Center in San Jose California. The show was Monday Night Raw, a two-hour broadcast with JR and Paul Heyman on commentary. We are seven weeks removed from WrestleMania X-Seven, the biggest show in company history. The Rock is gone. Steve Austin is a heel. The competition—World Championship Wrestling—has been acquired by Vince McMahon, and tentative plans are underway to relaunch the company as a new “brand.” If things continue as they are, the next several months will feature a bevy of new superstars rising to the main-event level as challengers to Steve Austin’s title reign, and Triple H will slowly undergo a face-turn that will culminate in a Royal Rumble win and a challenge to Austin at WrestleMania X8.

The roadmap is there for this to be an epic 2001 for the company and then, on May 21st, everything got tossed into a blender.

It all began that morning, as the talent started arriving at the Compaq Center for the night’s USA Broadcast. Chyna, then the public girlfriend of Triple H, confronted her supposed-lover about a secret affair he was having with Stephanie McMahon. The story concerning the breakup of Triple H/Chyna has been inconsistently told over the years, and there are a variety of reasons for that; it’s a sensitive issue considering it involves the heir-apparents to the WWE empire, not to mention the circumstances involving Chyna’s later years and ultimate death. One version of events, which we will call the Official WWE Narrative, is that Triple H and Chyna broke up in May, and then, after he went down with an injury, he and Stephanie started hitting it off during his rehab, leading to a relationship that led to marriage. However, years later, Triple H would say in an interview with Howard Stern, that he and Chyna broke up after she discovered the affair. She then confronted them at a TV taping and was ordered to leave after the argument evidentially became disruptive. After that, Chyna never returned and Triple H did not see her again until many years later. The last time Chyna was seen on WWF programming was the Judgment Day 2001 PPV, which occurred the night previous. If they broke up “at a TV taping” then that would be the next night on Raw, May 21st.

The loss of Chyna was the loss of an icon of Attitude Era women’s wrestling. Chyna was the first female performer to compete in a Royal Rumble, the first female to compete in the King of the Ring Tournament, and the first to win a title in WWF that wasn’t the “Women’s” Championship. She was the biggest and most accomplished female star in wrestling history until the present era, and had just started working women’s matches when she was sent home. Had she continued in the WWF, there’s no telling the quality of women’s matches she could have had with feuds against the likes of Trish Stratus and Lita. After she left, “divas matches” lost a lot of luster, and it would be fifteen years before they were given the kind of respect and equality with men’s matches that a superstar like Chyna had first trailblazed for them. 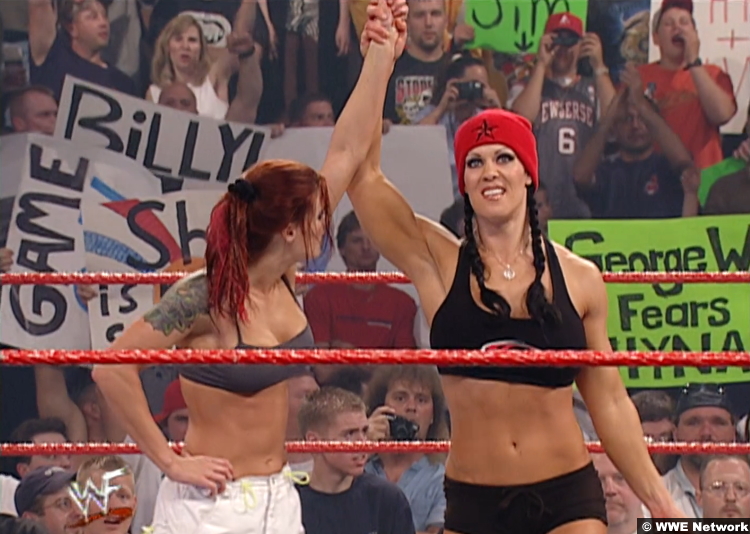 Only hours after Chyna was sent home did Monday Night Raw hit the air, the main-event of which was one of the most highly regarded matches in Raw history, at least among the fans. At the time, Steve Austin was the WWF Champion, and Triple H was his running buddy. Together they were a faction dubbed “the two-man power trip” and had won the WWF Tag Team Championship. They teamed up for the main-event of this Raw, with their Tag Titles on the line, against Chris Benoit and Chris Jericho. The nearly-fifteen minute match that followed, according to the record books, saw Chris and Chris become new tag champs. 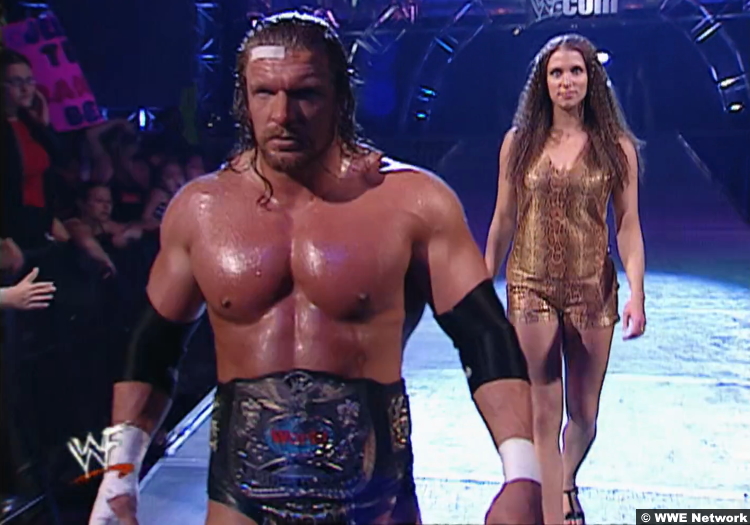 As it turned out, there was so much more to this match than just what the record books show. Near the end of the classic contest, Triple H tore his quad. Despite the injury, he insisted on continuing the match, leading to the now-infamous spot where he told Jericho to put him in the Walls of Jericho (a move that specifically stretches the very muscle that he had just torn clean off the bone). 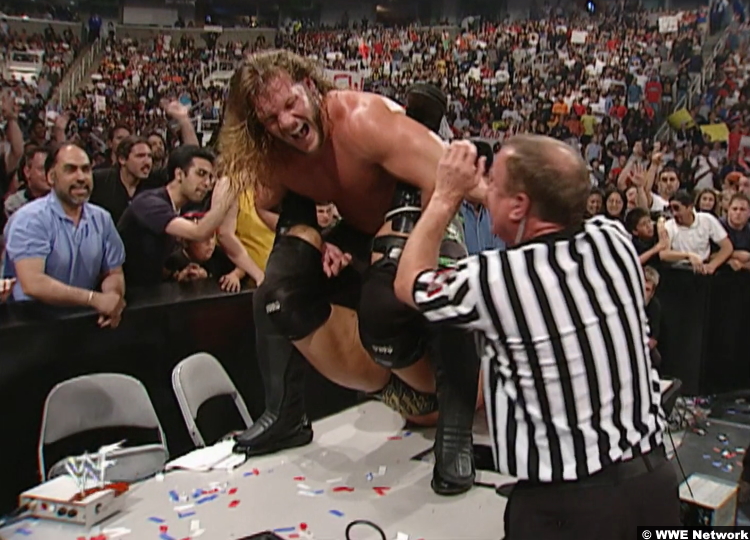 Of course, despite how excellently it was worked, this match is barely mentioned in WWE history, apart from vague descriptions of Triple H’s heroism to compete amidst injury. It was arguably the hottest TV match of the year, in front of one of the hottest crowds the WWF had hosted in months, and featured a title change that was meant to signal who the future babyfaces of the company were. Instead, because of Chris Benoit’s murder-suicide, the match has been all but stripped from existence. 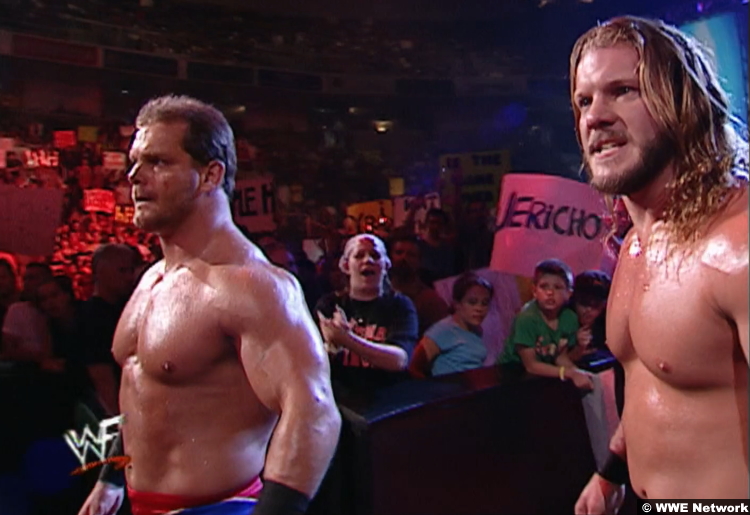 As a result of the Triple H injury, a number of plans were scrapped, altered, or completely reworked. As said, the Rock was gone, Austin was a heel, and now Triple H was on the injury shelf. The list of established main-event players was thin, and Undertaker and Kane had just proven themselves incapable of carrying the main-event scene to any financially beneficial degree (buyrates for the post-Mania PPVs, which featured the Brothers of Destruction, were not stellar).

Lacking confidence in Benoit and Jericho’s ability to jump straight to the main-event, and needing something to keep the product exciting to viewers, Vince McMahon decided to bring the recently-acquired WCW talent to Raw. Originally, the plan had been to relaunch WCW by rebranding Monday Night Raw into Monday Nitro. The first test for this came on the July 2nd Monday Night Raw, which saw the whole look and presentation change to a WCW brand, and featured the now-infamous main-event match between WCW World Heavyweight Champion Booker T and Buff Bagwell. To say the match was poorly received would be an understatement and it led to Vince shifting to the “InVasion” storyline, bringing in the rest of the WCW roster, as well as the ECW roster, turning them all heel and pitting them against the WWF. While the initial InVasion PPV did strong numbers, the booking that followed led to the whole angle being infamously mishandled, leading to sharply declining business. 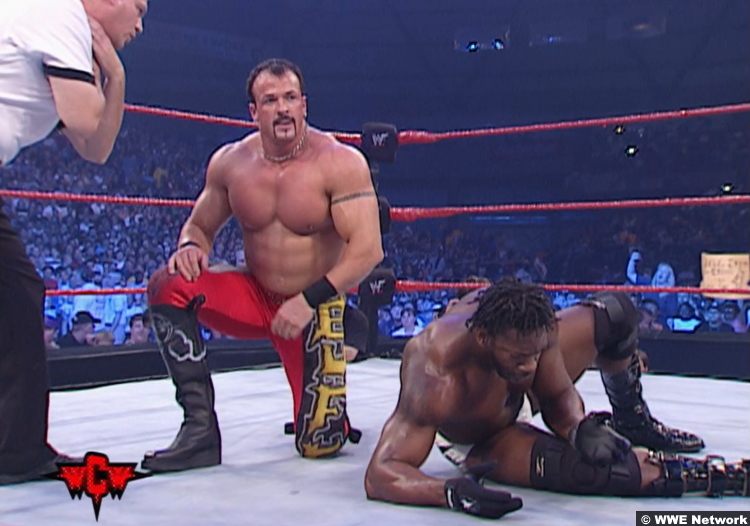 It took years before John Cena stopped the ship from sinking, but the WWE has never been as big as it was in 2001, and while many will point to the Austin heel turn as the iceberg that struck the titanic, it might well have been one forgotten Raw on May 21st, that really marked the beginning of the end for the second wrestling boom.