Loanie Laurer wanted to work for the FBI. She never aspired to be famous; she just wanted to be important. As a child she was gifted with the ability to play both the violin and the cello. She finished her high school in Spain, studied Spanish language at the University of Tampa, joined the Peace Corps and worked in Guatemala. She had big plans but they all fell through. When the FBI dream never materialized she set her sights on just working for a living. Far from the big ideas she aspired for herself, she instead worked as a cocktail waitress and a dancer. Later she decided to train to be a flight attendant. It wasn’t a glamorous job, but it was respectable and good. Unfortunately, a car accident ruined her opportunity and she again went back to just doing whatever she could to get by. At one point she was selling pocket-pagers door-to-door.

Meanwhile she was lifting weights. She had been a gym rat from high school and a body builder in college, and she was big. Not heavy-set, just…big:

As a result, she usually finished near the bottom of the fitness competitions she competed in. Low on options and wanting to make something of herself, she joined Killer Kowalski’s wrestling school in Massachusetts, working small independent shows around the New England area. She was discovered by Triple H and Shawn Michaels in 1996 who saw potential in her unique look. They pitched to Vince McMahon the idea of bringing her in as their bodyguard, as a subversion of the trope. Vince was initially reluctant because he didn’t think the fans would find a woman—even one as jacked as she was—beating up men to be believable. Around this time, Kevin Nash also discovered her and pitched bringing her in to WCW as a female member of the nWo. Now, of course, these weren’t the days when everyone and their brother was a member of the nWo; initially it was a smaller stable. Chyna would have been the first female member and a featured attraction. Laurer was ready to commit to WCW when Shane McMahon—on the advice of Kowalski—informed her that Vince had changed his mind and that he wanted her in WWF.

She debuted in early 1997 as Triple H’s personal valet/bodyguard, and later joined DX when the group formed in mid-1997. Just as HBK and Triple H had pitched it, Chyna was the “enforcer” of the rule-breaking stable, and was part of the original DX team (consisting of HBK, Triple H, Rick Rude and Chyna), remaining with the group throughout its many iterations during the Attitude Era. 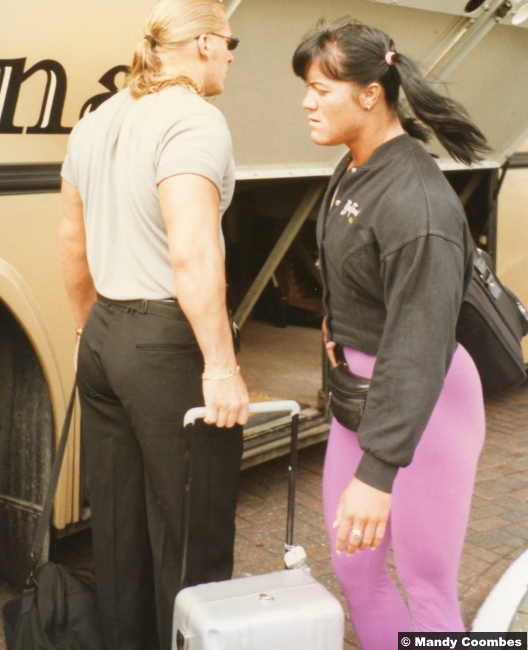 Throughout 1998 she mostly worked as a manager to Triple H but slowly began to work more on her own in the ring. 1999 was her breakout year, however. She made history in January becoming the first woman ever to compete in the Royal Rumble match. In June she did it again, becoming the first woman to compete in the King of the Ring tournament. In August she seemingly broke through one of the biggest barriers of all, when she defeated Triple H to become the number one contender to the WWF Title at SumemerSlam. Reports were that Vince was all-in and ready to put the belt on her, if only as a short-term stunt, but then-champion Steve Austin refused to lay down for a woman. He also refused to let Triple H beat him, thinking that he was not ready for the main event (Mankind would eventually replace Chyna and win the title at SummerSlam), but that’s neither here nor there. 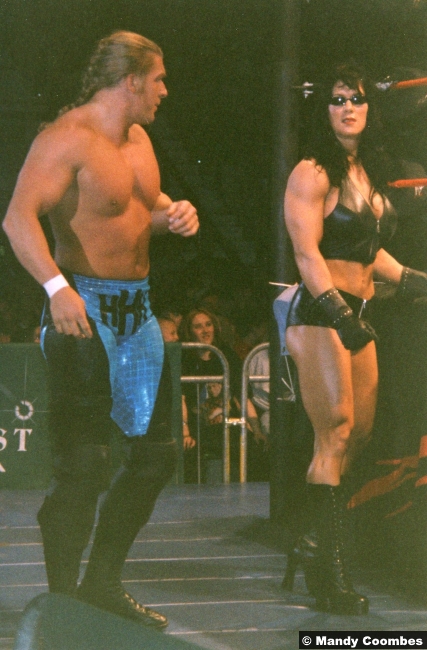 Immediately after, she began a feud with Intercontinental Champion Jeff Jarrett, losing the first match at Unforgiven that September but winning the belt at No Mercy in October. There was controversy behind the scenes, as many of the male wrestlers—for years—had expressed disapproval to Vince that they had to sell and take offense from a woman. Obviously Steve Austin refusing to drop the belt to her was the most notable example of this, but the one that stung the most came from Jeff Jarrett. Jarrett was on his way to WCW, having already given his notice to Vince and fulfilled his contractual dates. He was working the No Mercy show free of his contract, just to finish up his storyline (which is not uncommon in pro wrestling). With Chyna no longer in contention for the WWF Title, the IC title was the consolation prize. The problem was, Jarrett was offended at the idea that he would drop his title to a woman. As a result he demanded, moments before stepping through the curtain for his match, $300,000 from Vince, telling McMahon that if he didn’t write the check on the spot he wouldn’t compete in the match. Vince paid him and then, after the match, promised Jarrett he would never work for him again.

Years later Vince would buy WCW for pennies and then do this:

But that’s neither here nor there.

With Jarrett gone and Chyna once again a history-making superstar, she entered a program with Chris Jericho, retaining the title against him at Survivor Series but losing the title in December at the Armageddon PPV. Without a doubt 1999 was the biggest year of her career and the one where she established herself as a history-making, trail-blazing pioneer for women wrestlers.

Starting with 2000 she mostly moved away from wrestling men and competing for titles and became more of a manager to Eddie Guerrero. Though she did win the IC title once more at SummerSlam that year, it was a short reign that lasted only two weeks before the title was won by Kurt Angle. After that Chyna moved on to the women’s division, eventually winning the title at WrestleMania X-Seven. The third chapter of her WWF career never really took off, however, as she was taken off WWF TV later that spring. She remained off TV until November when her contract ran out, at which point she left the company and vacated the Women’s Title.

The circumstances of her departure involved the relationship between Triple H and Stephanie McMahon. Originally Triple H and Chyna had been an item backstage, but as Triple H became linked in a storyline to Stephanie, their on-screen relationship became a real-life relationship and Chyna became the odd woman out. The awkwardness of being dumped for the boss’ daughter (who also was an authority figure in the company) was too much to overcome and, according to Laurer, she approached Vince about it and was later sent home…only to be greeted by a fax informing her she was no longer needed and that she could sit out the rest of her contract.

After that she had a brief run with New Japan Pro Wrestling but nothing substantive came of it. Other than a few months in 2011 with TNA, she was out of wrestling by 2003. After that her life spiraled downward. Drugs, pornography, more drugs, and destructive relationships turned her from being a trailblazing superstar to the butt of many jokes. Her final years were spent with her protesting that she had cleaned herself up and that she wanted to restore her relationship with WWE (a feeling that apparently was not mutual). She would sporadically post YouTube videos with tear-stained cheeks, as she lamented the struggles of her life and the turmoil she was suffering through. They were sad, but again were usually the source of eye-rolls and quips.

On April 20th, she was found dead of an apparent drug overdose. She had been regularly taking anxiety medication and sleeping pills. Her death was sad, but not shocking.

Last year, Triple H was asked on the Steve Austin Podcast about the possibility of Chyna being inducted into the WWE Hall of Fame. Triple H gave a very political and carefully-worded answer, explaining that her career is worthy of the Hall of Fame, but the choices she made outside the ring might make her too controversial a pick to be selected. 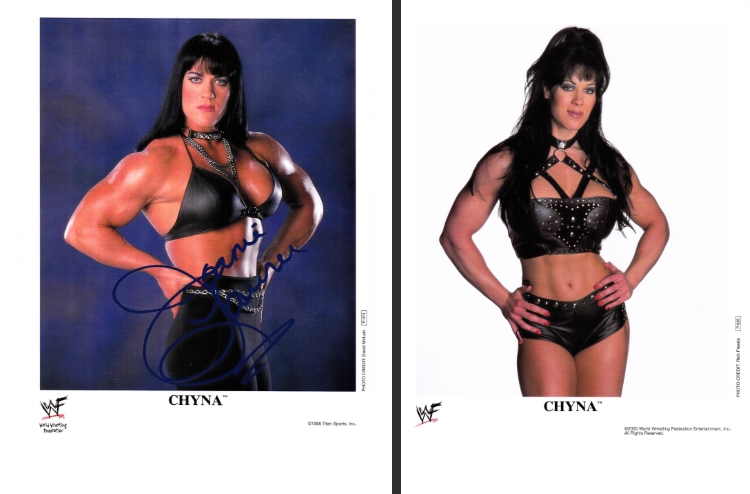 Now that she has died the calls are already starting that she should be inducted, perhaps as early as next year. I won’t debate the merits of her going into the Hall of Fame, but I will point out the impracticality of it happening.

I just don’t think she will. Not for a long time, at least.

Here’s the thing, unless you’re a megastar there’s not much “business” in inducting a dead person. That’s callous but it’s the way WWE looks at it. They want the person being inducted there to give the speech. That sells the tickets, and all the Hall of Fame is right now is just another ticketed-show during WrestleMania weekend. Unless you were an icon of the industry, like Eddie Guerrero or Randy Savage, your chances of getting inducted are slim. There’s always room for someone like Big Bossman to be honored on the undercard of the show, but he had a long and WWF-loyal career and doesn’t have near the bad reputation that Chyna has. I have a feeling Vince is not going to sign off on an induction simply because he will see the cons outweighing the pros. There’s too much potential for bad press and those looking for reasons to attack the company will find it easily with Chyna. Sure the fans will be upset, but WWE can always trot out the same “she deserves to go in, maybe next year…” line year after year and keep kicking the can down the road. 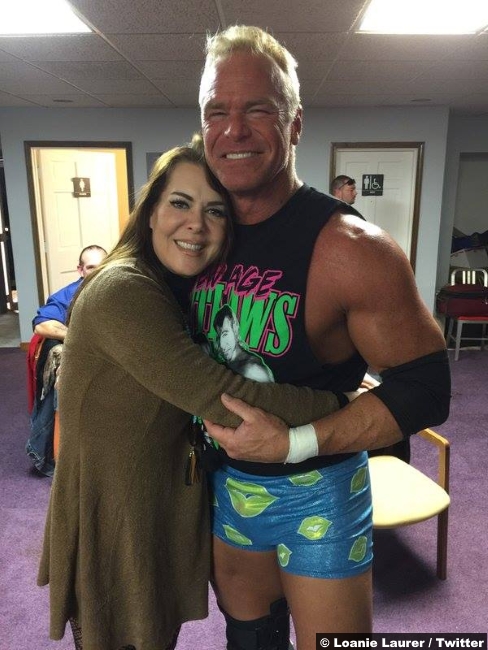 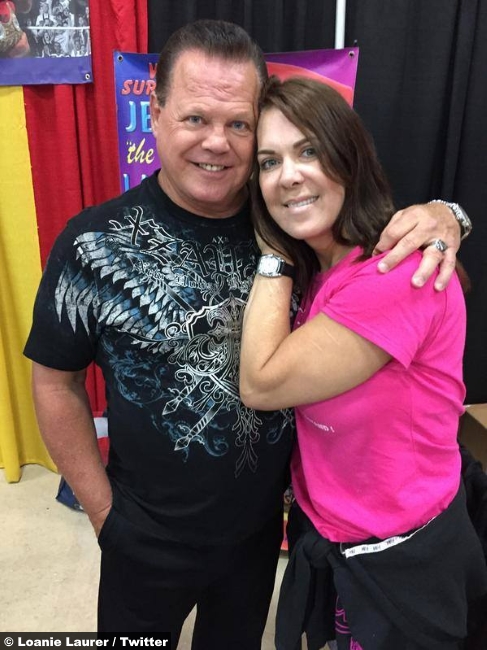 But whether she goes in next year or in a decade, or if she never goes in, there’s no denying that Joanie Laurer was an icon for women wrestlers. She was a trail-blazer, and despite the troubled life she lived, she was important to the sport that used her, abused her, ignored her, and now remembers her in death.