Season 4 of Star Trek: Discovery delivers another episode that feels like a classic Star Trek experience while keeping true to its sentimentality and feeding the season plot. The USS Discovery flies into a subspace rip left by the DMA after the events of “The Examples” to gather scientific data. Data (sorry, not that will help them).

The title of this episode takes its name after 1933 jazz standard, “Stormy Weather”.1 Just a classy musical reference, right? Nope. Those who know the Short Trek “Calypso”2 may understand who this episode refers to before series-only watchers: Zora, Discovery’s onboard sentient AI.

Some backtracking may help understand what’s going on here. This is a development that has been building since before season 2 began. The true beginning of Zora is in Season 2 episode “An Obol for Charon” when the USS Discovery absorbs the hundreds of thousands of years of information from the sentient entity they call the Sphere.

The Sphere data first exhibits its will when it refuses all the crew’s attempts to delete it. Season 2 turns out to be a war for this data, with Starfleet’s Control seeking to consume this library of information that is helping Discovery’s onboard computers become sentient. In effect, the emerging Sphere/Discovery sentience forces the Discovery crew to travel into the 32nd century.

In Season 3, DOTs appear as robotic drones to assist the Discovery. They don’t have a big role in the season, that is, until the finale. In “The Hope That Is You, Part II”, DOTs help the crew fight off Emerald Chain pirates. One sacrifices itself to save Owosekun.

Zora’s voice and emotions are a recent development in Season 4, and they take center stage in this episode.

Focus through the storm

This episode, at its core, is about retaining focus through the storm of emotion. Zora is overwhelmed by an exceeding number of crises. Book’s anger distracts him from his loyalty. Even Owosekun tries to leave ops to assist in dire repairs. Each of them need a crutch, “a little help from [their] friends,” to sail through their rough waters. 3

Inside of the subspace tear, the walls of nothingness are closing in on everyone, eating up whatever it touches. What a great analogy for nihilism and apathy. Who doesn’t feel this enveloping them when the doomscroll hits? I suppose some people (cough) are more sensitive to this story than others may be.4 I, for one, am very pleased (and only a little nervous) to see existential crises develop into dangerous spatial anomalies.

Gray is the first to reach out to Zora, using a human connection to focus the computer’s overloaded senses. Zora then relies on Captain Burnham’s encouragement and personal sharing to make it through the hardest moments. 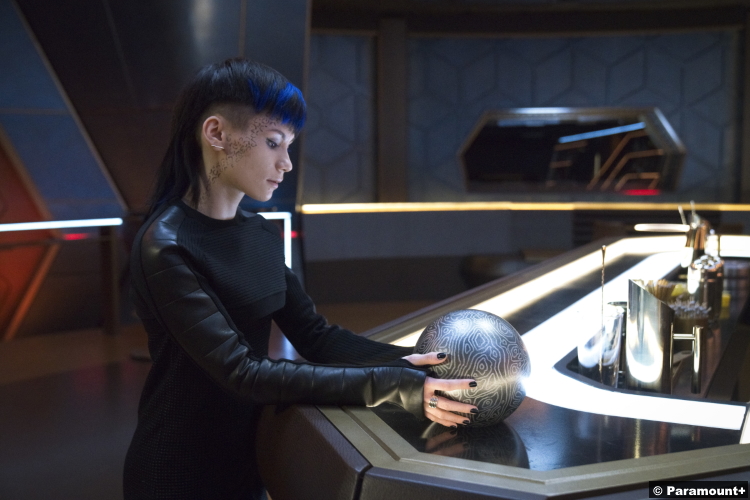 For the most part, Book goes it alone, as he is wont to do. Stamets helps by giving him work to do in engineering, eventually leading to the Spore Drive shocking his brain. Dr. Pollard and Dr. Culber are there for his medical needs. And then, Book hallucinates (or not?) his deceased father. The conflict between them is based on his father’s disdain for Book’s5 weakness and his insistence that their anger drives them. In the end, it’s Book’s own fortitude that pulls him through.

Saru shares his own anger with Book—this stuns Book, it’s pretty funny—in the aftermath of their escape. Saru’s dialogue at this moment ties a nice little bow to the message of the episode.

So Book’s brain shock? Turns out Stamets reconstructs the energy signature to discover that the DMA has traveled through the Galactic Barrier. The species piloting the DMA are from another galaxy. 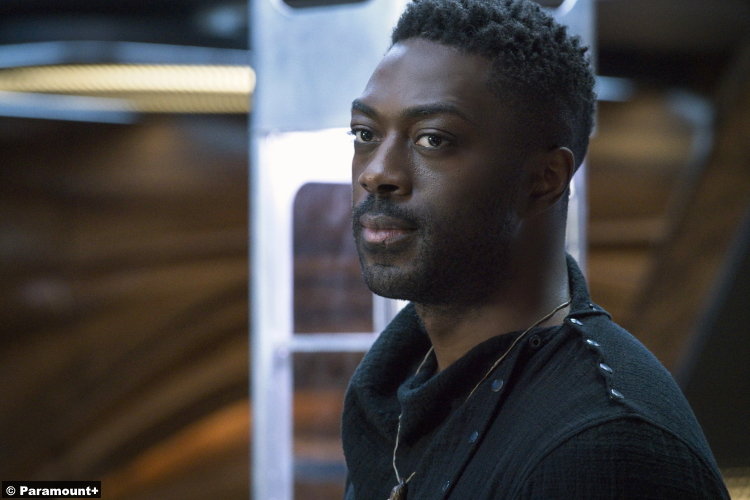 I suppose the “Galactic Barrier” won’t mean anything to those who haven’t seen any of the three Star Trek: The Original Series episodes that reference this spatial phenomenon:

The first explains that the barrier prevents entrance or exit from the galaxy. The third features a crazy attempt to travel past the barrier. Both deal with a great deal of ESP stuff. Though the season three episode has a pretty cool alien—from the Milky Way. Only “By Any Other Name” features aliens from another galaxy attacking the Enterprise.6 It’s probably one of my favorite TOS episodes.

What logic is there in these attacks, then? Destroying Kwejian eliminates the possibility for pilots who could pose a threat. J’Vini moved the moon generation ship in fear of the anomaly. Could it be the “supernova” in the mausoleum pictograms was the DMA? I’m not sure about how destroying that asteroid belt achieves a military goal, though. Creating tension between Federation and former Emerald Chain, perhaps?

In any case, I’m hooked for next week.

8/10 – Focus is key, and it’s on prime display in “Stormy Weather”. The beginning of Zora’s story—the prequel to “Calypso”—unfolds in a novel, gentle AI story. David Ajala just kills it like he does every week, and we’re within breathing distance from our intergalactic antagonists.

2 Written by Pulitzer Prize, Nebula, and Hugo Award-winning author, Michael Chabon. Seriously, check this one out. This short film gives some strange depth to the fate of Zora and the USS Discovery.

3 You could say, these are no “Fairweather Friends”. Yeah, so it’s a musical review this week. Zora sings, so I can link a bunch of music, right?

4 If it’s not clear yet, Star Trek: Discovery is a cheerleader for every fan of its show. Each episode dives into a type of psychological struggle everyday people are forced to confront and varies this conflict with nuances of severity between its characters. The end goal is not to belittle these struggles, but to demonstrate that everyone needs a shoulder and kind words to make it. All that packed through the lens of crazy science fiction stories.

5 And we learn Book’s given name, Tareckx. The subtitles suggest this is also Book’s father’s name.

6 I realize it’s futile to get my hopes up, but I would love to see a real-form version of the Kelvan. The timing almost matches too, if a second team came, returned, and came back with the DMA as their armada.