As you might expect, the vibe around the crash survivors is not great. There’s the one-two punch of Van’s mauling and watching Laura Lee explode, of course. Then there’s the still pressing matter of their imminent starvation.

They’re in stage one right now, the prologue to full starvation. By that, I mean that they’ve been reduced to scavenging for grubs. Edible plants and berries are one thing, but they obviously need some kind of protein. (On that note, I can’t remember if/why no one has brought up the lake. Is there nothing edible in it?) 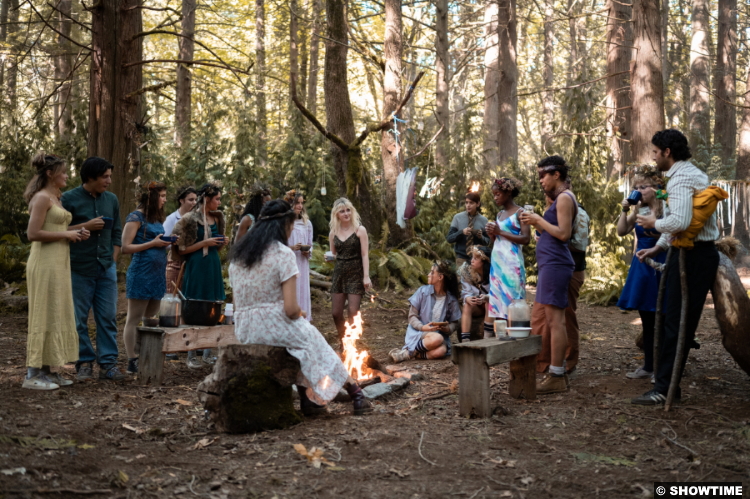 Some of their berries have already fermented. That, along with their wistful realization that they’d be attending homecoming if they were, you know, home, inspires them. They’ll throw one last bash before they starve, the titular Doomcoming.

Uh, maybe they should have given it a better name because it really lives down to expectations. But it didn’t start that way. In fact, it’s kind of sweet at first. Van is self-conscious about her bandages–they’ve got her wrapped up like someone with an old-timey toothache. So Taissa makes masquerade ball-style masks for them to wear.

The party also seems to be their coming out, as a couple and as gals who like gals. Coach Ben, whom we know is also gay, tells them that he’s proud of them. See? Sweet. But of course, there’s also a Misty, who’s like the fentanyl in this sweet chocolate. 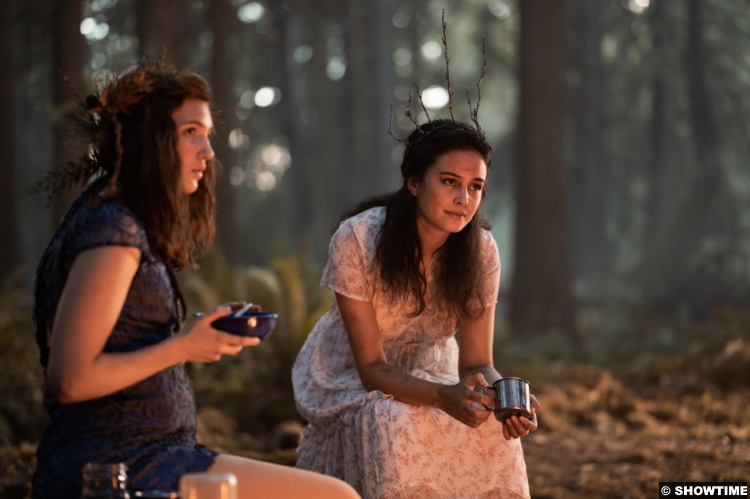 Mari is making sad vittles for the party when she finds some mushrooms that Misty has squirreled away. It’s obvious that they were supposed to be secret, but Misty doesn’t say anything when she sees the other girls cooking with them. I know hearty mushrooms would be tempting, but still, I wouldn’t just ingest any random ones I find. As such, knowing that Misty’s got her sights set on Coach Ben, I assumed she was trying to make him sick and thus, dependent on her.

I was way off, though, because the mushrooms are actually hallucinogenic. Before they feel the effects, Coach Ben and Nat dip out to sneak a drink from a whisky bottle Nat found under the cabin. Taissa and Van end up leaving to…uh, please respect their privacy at this time.

The others are all together, though, when the shrooms kick in. And then all hell breaks loose. At first, they’re just tripping. But once they realize that Jackie and Travis are off together, the vibe turns.

Jackie, who didn’t have any of the mushrooms, has been headed toward being an outcast for a while. It started when she couldn’t or wouldn’t find her niche in working for their survival. But it goes nuclear with the Travis thing. The hive mind decides that she’s taken Travis from Nat, which is a crime.

But rather than go after her, they just lock her in the pantry. Then they turn their attentions to Travis. At first, it’s kind of flirty. Then it’s predatory. They chase Travis, their stag, through the woods and they catch him. Lottie dons the antler crown. And Shauna’s on the brink of slitting his throat when Nat busts up the madness.

Of course, that’s left Coach Ben alone, which is where he is when Misty finds him. She tries to make a move on him, but he ends up yelling at her that he’s gay. Hmmmm. I don’t think she will take that with grace.

She’s a lot more thrilled, though, as an adult when Nat shows up at her door. As you might recall, we ended last week with Shauna confronting Adam. He sure seems suspect, especially when she finds a book and a magazine about the crash survivors. He claims that he was just curious about it all after he googled her. She doesn’t buy it, though, and fatally stabs him. 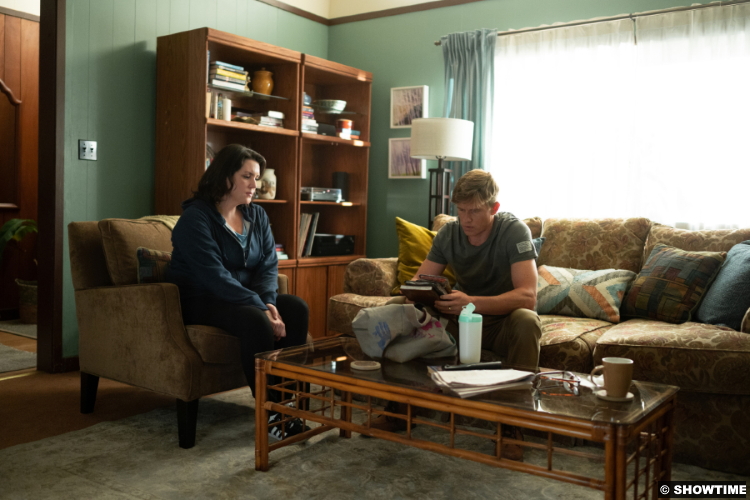 Then she gets home to find out that my suspicions were correct and her husband was behind the blackmail. His store is failing and he couldn’t pay the loan sharks who were his first attempt at saving his business. So he blackmailed his wife and her friends, assuming that Nat or Taissa would pay him off. As for the journals, he read them years ago. So why were they missing from the safe? Or were they? I don’t know what to trust.

After all, you can’t even trust your own friends to tell you the truth, because Shauna loops in Nat and Taissa on the whole Adam situation. She tells them, though, that he was the real blackmailer, so she killed him because he threatened her. The corpse on the floor doesn’t rattle the women at all, but they realize they’ll need to do something with the body. Shauna-related evidence is all over his apartment, for one thing.

And that’s where Misty comes in. Jessica had been subtly needling her, pointing out that the other women didn’t really include her. So when Nat shows up, asking for help in ditching a body, Misty is visibly excited. Back in the woods, as you’ll recall, she prevented any hope of a faster rescue, because she didn’t want to give up being the capable one just yet. She was finally part of the group. So for similar reasons, has she set this most recent string of events in motion? In other words, did she kill Travis? I guess we’ll find out at the reunion in next week’s season finale.

9/10 – I’m trying to think of something to say about this episode overall that’s not just, “Whew, that was crazy.” The episode was good as a whole but the hallucinogenic scenes were on another, way more anxiety-inducing level. I had to keep pausing it because I couldn’t take it all at once. It felt like anything could happen, and I guess after this point, anything can.

And speaking of me saying “whew,” I thought I was going to have to link to a Collective Soul song this week. I never really cared for them, although the cut they included in this episode (“The World I Know”) isn’t too bad. Luckily, though, the episode also included Belly’s “Gepetto,” an actual 90s favorite of mine.