Finally, we get our introduction episode for someone, Charlotte, with whom we haven’t been following in present time. However, just because we haven’t seen her as an adult doesn’t mean anything. We’re obviously far off from knowing who all survived.

That being said, how we find Lottie this week doesn’t bode well for her future survival. As we know, she’s off her meds and she’s seeing things. It’s unclear, though, if the things she sees are real, hallucinations, premonitions, or some wild mix of all of them. 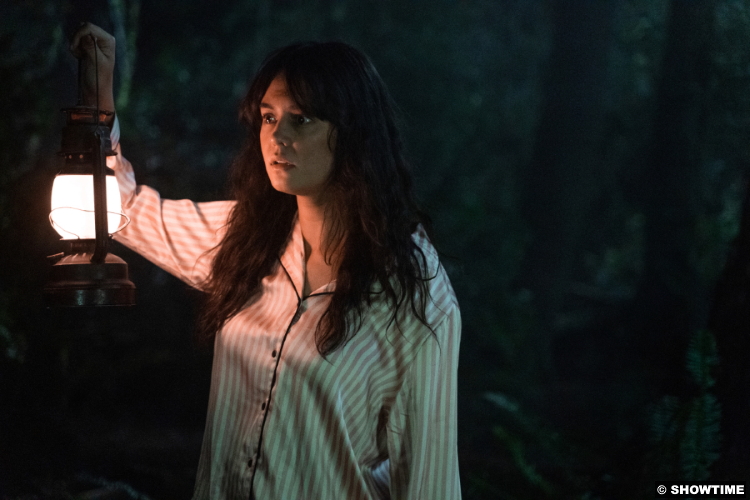 I say “premonitions” because of the backstory that we get for Lottie. In a flashback to when she was very young, she has a freakout in the backseat of her parent’s car. Because they’re distracted by her, they miss the traffic light turning green and subsequently, a serious accident.

But was she having a premonition? It’s no secret that human beings love to find patterns. It’s how we make sense of the world around us. We see shapes in the clouds and faces in the dark. We love to make connections.

And the things she sees, while disturbing, are not necessarily untrue. For instance, she sees (or thinks she sees) a buck with tangles of bloody velvet hanging from its antlers. It’s not the prettiest sight, but it’s a thing that happens. Deer shed their velvet. (Thank you for subscribing to Deer Facts. For more information, call my dad. Or see this very informative post.)

Of course, other things she sees are harder to explain, like when she thinks she sees Taissa gobbling dirt. When she asks her about it the next day, Taissa dismisses it as nonsense. But it upsets Lottie enough that she goes to religious Laura Lee for help. 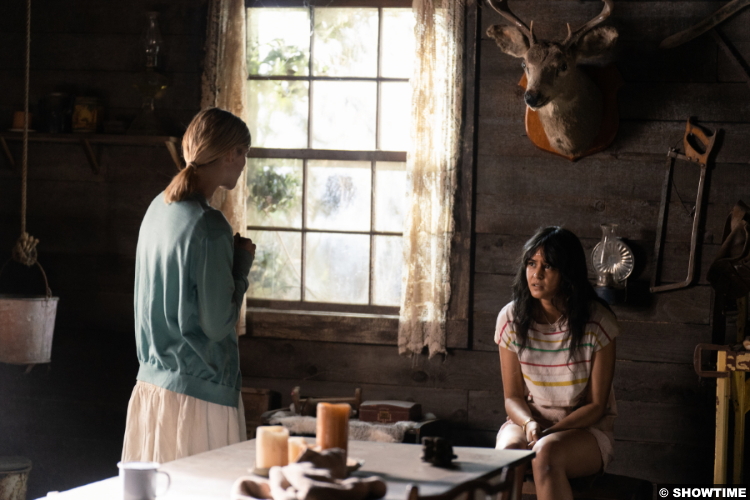 Despite how TV shows and movies usually depict the devout, Laura stands as an exception. She’s gentle with Lottie, much more so than you might expect a teenage girl to be. However, she does suggest that Lottie “accept [Jesus] into [her] heart,” which in my experience, is code for baptism.

That sets off alarm bells for me immediately. It’s not because of the religious aspects or whatever. It’s the fact that taking an unstable person into the water and submerging them sounds like a recipe for disaster. She’s not gonna like it!

And she does not. She emerges terrified, having had visions of “fire and light.” It doesn’t alarm Laura, though, who believes that Lottie has witnessed the spirit of the Lord. Oh, Lord.

Meanwhile, Taissa was distracted when Lottie asked her about the dirt because she was looking for Shauna. Having figured out that Shauna is pregnant, she volunteers to be with her and help her when she tries to terminate it. Shauna can’t go through with it, though, so it’s going to be interesting to see what happens with her pregnancy.

In the present, Shauna and Jeff have brunch with Jackie’s parents. If Jackie isn’t dead, then everyone sure is talking about her like she is. A journal in her bedroom features notations about pop culture past 1996, so either she survived the forest ordeal or someone in props made an oopsy.

Anyway, the brunch is terrible, mainly because Jackie’s parents are openly hostile to Shauna. I did enjoy Shauna announcing bluntly that she doesn’t like her daughter. I also did a real-live spit-take when Jeff told them that he and Shauna were sleeping together as teens. He does this, mind you, as a lead-up to a defense of Shauna, which was really sweet.

It’s a moment of sweetness in a show that rarely is. There was another moment when Nat gives soccer advice to Kevyn’s son that also moved me. For a second there, you can see the kid she was. And speaking of, her scene with Travis in the plane was also good. It really establishes their relationship, and why his death is so haunting for her.

But again, those tender moments are few and far between. Otherwise, it’s just nastiness. We’ve got Misty drugging and kidnapping the reporter, for example. I don’t know what Ms. Misery–Mistery?–is up to with that, but I’m sure it’s nothing wholesome. 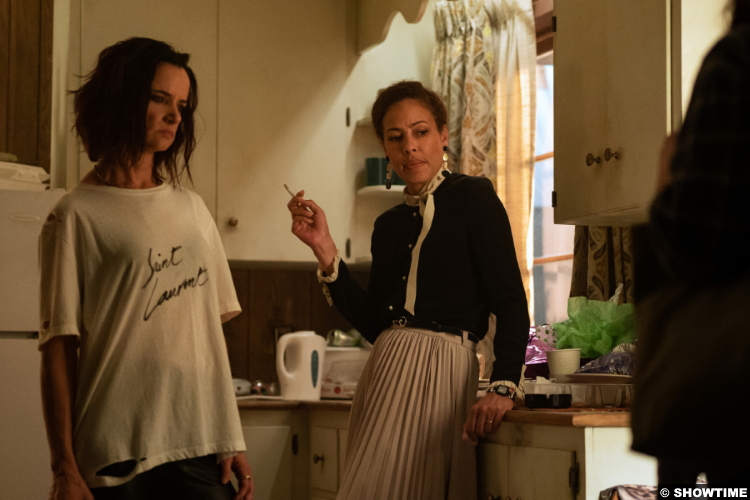 And of course, there’s the anonymous blackmailer. Taissa, Shauna, and Nat meet up to discuss the money demand, but they’re no closer to figuring out who could be behind all this. Nat ends up selling her car for the money, by the way, because Taissa can’t get Simone to sign off on a withdrawal that big.

Simone is mad about Taissa not dropping out of the race. She’s also irritated because she thinks that Taissa isn’t committing enough to finding out what’s up with Sammy. They take him to see a doctor, who says that because he claims to have no memory of the incidents, that it could be a result of something like “psychogenic fugue, dissociative amnesia.”

Hey, didn’t I mention dissociating last week? Yeah, I did. Specifically, I mentioned Taissa. And guess who suddenly finds herself perched in a tree, bloody and disheveled? Sammy has apparently been telling the truth, at least about the woman in the tree. So what was Lottie right about?

8/10 – Even though I predicted that Taissa was behind the weirdness in her life, that image of her in the tree still came as a shock. It was a nice reminder that this is, at heart, a horror story.

*Note: Although Taissa denies it, I must also point out the scene where her secret girlfriend Van points out that Taissa has dirt under her nails.